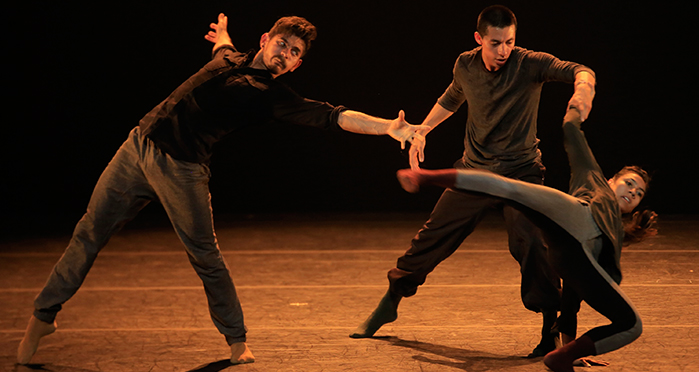 Over four decades, NextMove Dance (formerly Dance Affiliates) has led the dance scene in Philadelphia, bringing countless cutting-edge dance companies from around the world. As the opening program of NextMove’s 46th season, RUBBERBANDance Group stages Vic’s Mix, its showcase of the signature repertoires by the founder and the choreographer, Victor Quujada. As an international renowned post-modern dancer and a ballet dancer who has a background of 1990s U.S West-Coast hip hop, Quujada’s choreography is spontaneous and igniting, combining grace lines of ballet and distorting contractions of modern dance.

Part one of the program consists of excerpts from Physikal Linguistiks and Second Coming set to the music by a DJ/music composer, Jasper Gahunia (aka DJ Lil’ Jaz, eljay II). For Part Two, five excerpts that were featured in Elastic Perspective and Elastic Perspective Redux are presented. Set to popular classical music pieces by Prokofiev, Bach, Vivaldi and Verdi, the choreographies are intuitive to the atmosphere of each music while narrating a variety of emotions and lives of everyday people.

The top class dancers are powerful and magnetic, having unbelievable control over their physiques to their cell level. It is cool, magnificent and intense, great entertainment not only for dance fans but for anyone who loves to be excited.