Call me Ishmael. As founding artistic director of The Renegade Company (therenegadecompany.org), Michael Durkin has provided Philadelphia audiences with a stream of engaging theatrical productions: Hamletmachine, The Amish Project, and Glass: Shattered. Renegade is making a splash in the 2013 Fringe Festival with Bathtub Moby-Dick, a repurposing of Herman Melville’s masterpiece. Yes, it’s set in a bathtub.

Michael talked to Phindie about the novel, his new play, and baths.

Phindie: Moby-Dick is a great novel. What about it resonates with you?
Michael Durkin: The madness and monomania of Captain Ahab. The monotony of being on sea. The camaraderie of the characters aboard the Pequod. How the novel still holds up today and how each of us try and chase after the white whale.

Phindie: I read it as a teenager, because reading it is something one has to do, and just remembered it as a good old book, but I was struck when I returned to it recently how unusual it is in narrative. For a work considered a “Great American Novel”, it is quite out there. Melville’s trying out a lot of styles and ideas. Do you see parallels with the work you’ve been doing with The Renegade Company?
MD: Exactly. We wanted to structure the piece in a similar style to that of the novel. The piece isn’t an adaptation of the novel, it’s a repurposing of the novel. We are using the physical book and its iconography today along with Melville’s characters and words to create a new work. We follow similar changes of mood and tone to those of Melville’s work. 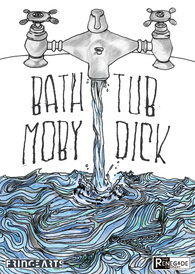 Phindie: What inspired this repurposing? Any influences?
MD: The company has been attracted to Moby-Dick for awhile and kept thinking about how we could adapt the novel and we kept getting stuck on the hugeness of the story, as well as the words. Then I re-watched the episode of Seinfeld where Kramer lives in his bathtub. He does everything in there: cook, clean, does his taxes, etc. There is something obviously humorous about that, but also kind of pathetic. I imagined a character who lived in his bathtub and never left. I found a comparison to this character and the character of Captain Ahab and thus Bathtub Moby-Dick was born.

Phindie: What was the process like, did you have a finished script entering rehearsals, or did it build as you got into the tub, so to speak?
MD:  Myself and the performer Ed Swidey came up with the concept and through a series of workshops I created the text. We refined it In the rehearsal process and adjusted and revised it once we arrived at the venue.

Phindie: So I guess you have access to a pretty big bathroom?
MD: The bathroom is normal-sized and the audience is located in another room watching a live feed of the performance.

Phindie: Baths or showers?
MD: Clawfoot tub, with a shower. Using both of them.

Phindie: Favorite line from Moby-Dick?
MD: “for there is no folly of the beast of the earth which is not infinitely outdone by the madness of men.”

Bathtub Moby-Dick runs September 4-22, 2013, as part of the Philly Fringe Festival. Tickets and info at fringearts.ticketleap.com.

One Reply to “Michael Durkin: An interview with the creator of BATHTUB MOBY-DICK about, er, Moby-Dick and baths.”