Dennis Porter, part of the three-man CIRQUE DU GAY, is trolling up and down the aisle at Plays and Players Theatre in a clown suit. His face is painted white and he’s holding a massive pen. What’s he doing? Picking out audience members to draw funny pictures of.

“I think I’ll call you Richard Cranium,” he says, handing one man his portrait: a smiling phallus. And this opening act is a perfect metaphor for the whole show.

CIRQUE DU GAY, a risqué circus-cabaret act from Kansas City, opened Quince Productions’ GayFest! (August 6 to 24, 2013). It is a parody of the circus complete with magic, slapstick, tight-rope, drag, and buttless chaps. The double-act plus one, consisting of clowns Dennis Porter and Peyton Westfall, and their stage manager, recently has received “best of” at the Kansas City Fringe two years in a row.

The CIRQUE is “two shows in one,” according to the show’s write-up. What they’re referring to is how, at the start of the show, the clowns strip down the walls of their circus tent to reveal, behind a wire mesh, their changing room area, with all of their costumes, shoes and props. While one actor performs, the other is usually changing his clothes.

This backstage view does not reveal a whole lot about circus performing. What it does is add a desperate energy to the performance, stripping away the cleanness and comfort of transition. As with all circus acts, it is a gambit, like if Kenneth Branagh performed Hamlet in Spiderman underoos. If Branagh acted his ass off, we’d eventually stop focusing on the underpants and feel the gravitas. 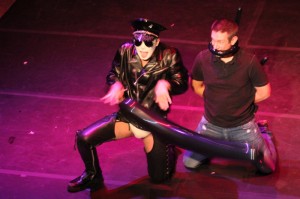 And the CIRQUE is constantly dancing, singing, strutting, flexing and acting its ass off. Westfall and Porter are talented performers, and though in some early acts there is the feeling that they need a bit more material, soon events are careening forward with a manic hilarity. The clowns are not afraid to reveal that they do not always know, any better than the audience, what is going to happen next.

A big part of this is the show’s repeated audience involvement. Toward the start, a woman is brought on stage to dance ballet with Dennis, who drags her around the stage, whispering commands into her ear. She compliantly spins and flaps her arms. Throughout the night, people are invited, pulled and carried onto the stage to perform various acts the clowns would rather not do themselves, tasks which get more and more ridiculous. In one moment of true, dazzling absurdity, an elderly gentleman slowly slipped off his fanny pack as he swiveled his hips to a club beat.

This is a variety show with an intimacy and invention rarely seen in Philly. Certain key bits had me laughing uncontrollably in a way that I rarely do in a theater. CIRQUE DU GAY is a ninety minute parody/homage to both the circus tradition and their audience members, and viewers, whether they got to be involved or not, will walk away feeling that it was too short. Final show tonight at Plays and Players Theater, 1714 Delancey Place. Tickets are $25 here. August 6-7, 2013, quinceproductions.com.

One Reply to “CIRQUE DU GAY (Quince): Circus in stockings and buttless chaps”