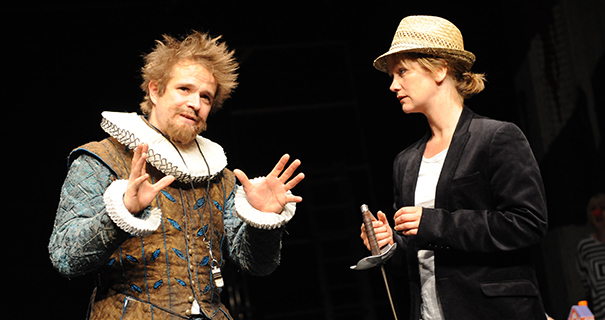 Filter Theatre’s take on TWELFTH NIGHT is actually done in the same spirit as a ballet company’s performance of A Midsummer Night’s Dream. While this performance and a ballet have absolutely different sensibilities, both are visual and musical reimaginings of Shakespeare texts.

I will not go into the whole complicated story of TWELFTH NIGHT, as it’s readily available elsewhere. Filter is on a nine-week US tour, basically of college towns. They do play around within the broad outlines of the work without much supporting text, taking the chance that important cast doubling could be confusing to those who aren’t already in the know.

This ensemble production stretches the partying parts way out. They retain a few set-piece speeches on the love theme, like old fashioned cameos set in the tumultuous environment. Some lines, thrown into the riotous setting, can be hard to make out, as they’re massaged into a blur by various electronics. The stage is a mess. Actors and musicians hang out around folding tables covered with junk and amplifiers and synthesizers, and draped with hanging wires and cables. And then there’s the drum set and all the instruments.

In an ultra long scene, key to this 90 minute production, party animal Sir Toby Belch and company are having good hearted, drunken fun at night. They’re making too much noise singing Haddaway’s ’93 hit single, “What is Love.” Wait, did it just morph into the instrumental, “Tequila”? This scene’s construction is genius. The audience, encouraged to participate, throws Velcro balls from their seats, hitting people on stage in the head. Things get louder as some join the merrymakers on stage.  So when Malvolio, the spoilsport steward, storms out to scold, the audience, which has been caught carousing, is in trouble too. Later Malvolio dances out his own pretensions in a nutty hair band number.

Although the show comes off as chaotic and somewhat unrehearsed, I suspect that this touring troupe left improvisation behind a long time ago. Their fun, spontaneous routine, which began as devised theater, has been set. But it looks like there’s an open choice of which gags to use for a given audience. It’s a very short run here at Penn. The last show is on Saturday night, Feb 13.

TWELFTH NIGHT, which has its own built-in chaos, is usually civilly observed and courteously appreciated. This production would not be the place for lovers of Shakespeare’s language who seek a contemplative experience. The Filter ensemble shows the audience a good time with lots of music, noise, and laughs within a Shakespeare play environment. The live instruments plus techno music combination is incredibly well done, and the relentless clowning appeals to the crowd. Hey, if music be the food of love, play on.