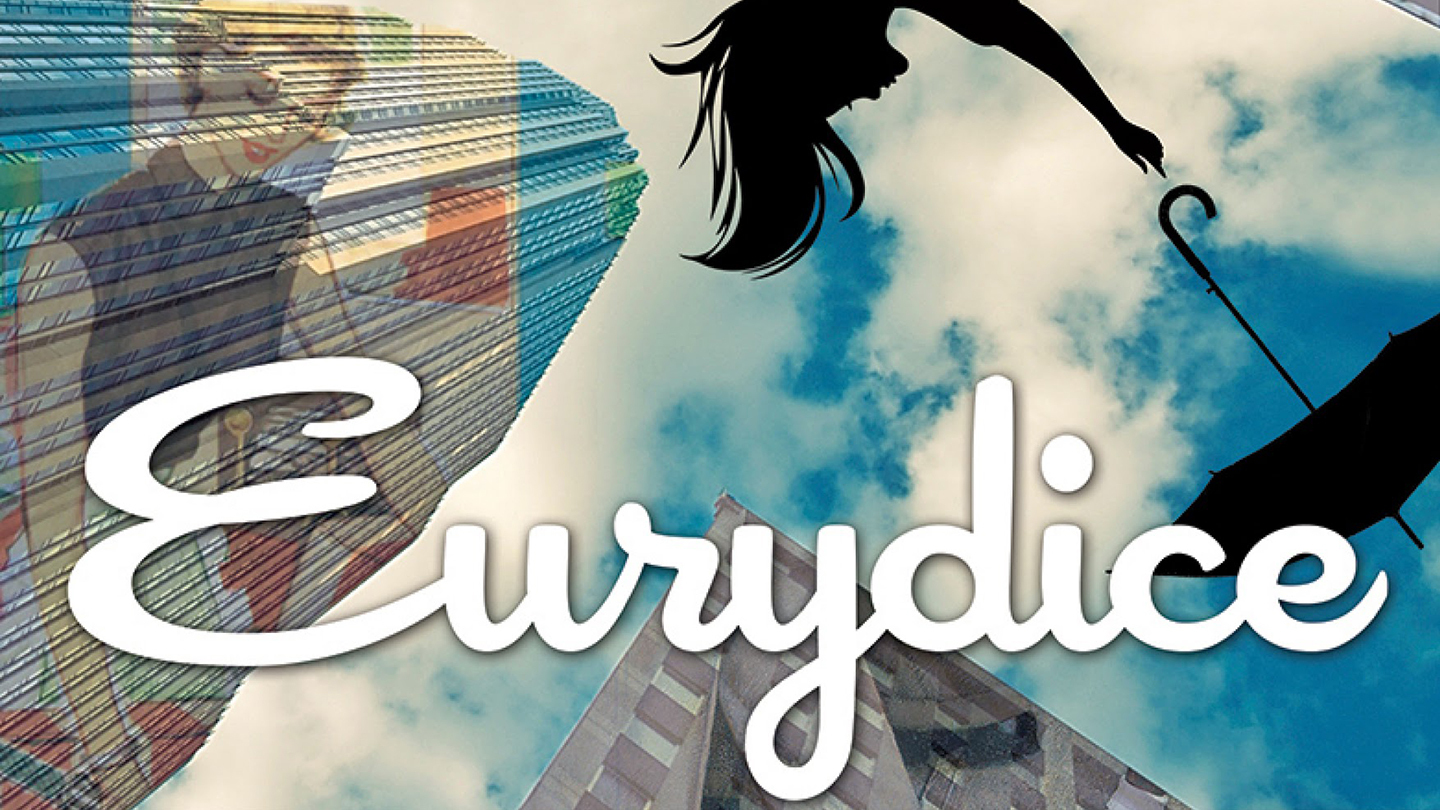 Holding her breath while submerged in the River Styx during her crossing from life to the Underworld, and jauntily sporting a tentlike umbrella as she reaches the Underworld’s portal, Eurydice (Rebecca Jane Cureton) does not quite succumb to the finality of her mortal condition. Much to the chagrin of stones that serve a chorus, she retains her ability to think, talk, yearn. She also retains the human traits of being sentimental and indecisive. That means she can make noise and break rules the Stygian stones (Rachel O’Hanlon-Rodriguez, Elizabeth Meisenzahl and Megan Rose) find jarring,

Death, as experienced by Eurydice in director James Ijames’s comic yet movingly evocative production of Sarah Ruhl’s play, is a continuation of life. And not just in the sense of an afterlife, but in a manner that extenuates her earthly life and presents her with more conflicts to consider than when she lived.

Then, she was pretty much in tune with her existence and relatively carefree. She mourned the death of her father (Kevin Esmond) but accepted it as a passage of life. She meets a man, Orpheus, who loves her exceedingly and whom she loves just as ardently. Orpheus rarely speaks. He sings his plaintively poetic love songs. In Ijames’s production, he borrows tunes from Irving Berlin and George Gershwin.

Rebecca Jane Cureton, an actor with a record of fine performances, is breakthrough brilliant as Eurydice. She is especially funny is thwarting the more serious Orpheus (Stephen Matthew Tornetta), who becomes amused by the taunting. Orpheus asks Eurydice to marry him, and it looks as if the two could live happily after ever. As the famous Greek myth tells, fate, magic, and the mischief of a god intervenes.

The god in this case is Hades himself, called by Ruhl the Lord of the Underworld after she first nominates him “A Nasty Interesting Man.” Hades is as enamored of Eurydice as Orpheus is and is not shy about using his vast Olympian powers to unscrupulously lure her to him. His ploy is temptation. He allows Eurydice’s late father the opportunity to write Eurydice a note from the Underground, one that pits her role as dutiful daughter against her position of happy bride.

As proffered by Chris Monaco, Hades’ overtures are sleezy but promise a bit of fun. Monaco plays Hades as a spoiled playboy of this modern era, simultaneously smooth and nerdy, and dressed with comic yet stylish flair by Janus Stefanowicz. Death, for Eurydice, seems ideal. Why choose anything else?

The Greeks millennia ago, and Sarah Ruhl, have an answer to that question. So does James Ijames, who shows that Ruhl’s script can take several unexpected turns and address many ideas instead of concentrating on the depths of Orpheus’s consuming love.

Ijames has fun with large sections of the text while keeping a tone of romance regarding Orpheus and Eurydice’s love for each other. Mischief elides into tenderness, and the two combine well as Ijames shows the absurdity of Eurydice’s situation while conveying the all-too-human dilemma of too many good choices and how love should triumph. But Ijames does not let the romance between Eurydice and Orpheus dominate, rendering all else to a tangential, clarifying place in a passionate love story.

Ijames has tapped something much more fascinating from Ruhl’s script, a look at a woman who is so admired, and whose company is so coveted, three men, two suitable, vie for it. Eurydice becomes more than a symbol for lost love, love taken by trickery by a god who can trump the power, and willpower, of mortals.

From the plangent plop of water to the sound of a river soothingly rushing by, Alex Bechtel’s sound design captures the sedate side of Hades and Eurydice’s disruption of it. Bechtel and Ijames also employ a great echo effect when Monaco tries to restore order in an Underground his Hades has allowed to get out of control with no tangible benefit, i.e. sex with Eurydice, for him. This bit makes Monaco’s Hades seem as ersatz as the Wizard of Oz.

Janus Stefanowicz’s costumes  bruit the wit of Ijames’s staging. Monaco’s tux is a highlight, but the simple black and white horizontal-striped T-shirt Orpheus wears, the bathing suits in which we see Eurydice and Orpheus in the beginning, Eurydice’s wedding dress, and the garb for the stones all have elements of humor, glamor, or smart correctness for the characters wearing them. Read the full review >>> [Vasey Hall at Villanova University, Lancaster and Ithan Avenues, Villanova, Pa] September 22-October 4, 2015; villanovatheatre.org.