Last Chance, the musical duo of singer-songwriter Jack Scott (banjo and guitar) and fiddler-vocalist Ingrid Rosenback, has been playing together since 2011 and as a duo since 2012. They perform mostly original songs. They are participating in WXPN’s Musicians On Call program, and are playing extensively in Philadelphia and the surrounding area to people of all ages. 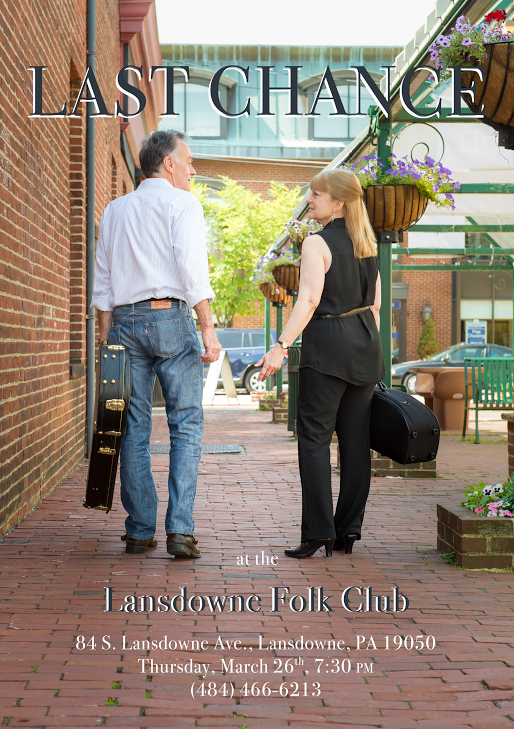 Henrik Eger: Last Chance has become very popular. How do you explain that success?

Jack Scott: We love to play and sing together, and our audiences know. After each show we make sure everyone was satisfied. We keep our music fresh and varied, growing and improving all the time.

Ingrid Rosenback: Many of our jobs arise from our audiences spreading the word. All our songs are different, interesting, and exciting.

Henrik: Ingrid, is it true that you became a musician from the moment you raised your hand when your fourth grade teacher asked who wanted to take violin lessons?—at least, that’s the charming story being passed around by musicians in Philadelphia.

Ingrid: True story, but I actually studied biology first and worked with rats and mice and bugs and earned a degree in pharmacy. I then studied violin at Temple and became a classical violin teacher. I played classical music in orchestras and chamber groups for quite some time. Eventually, I taught myself to improvise.

Henrik: Jack, how did you become a guitar and banjo player, a composer, and a lyricist?

Jack: I’ve been playing, singing, and writing songs since I was in high school. I loved folk music and rock, and the Beatles made popular music even more interesting. I listened to all the great songwriters and gradually developed my own style.

Henrik: You worked as a successful lawyer, and now you write lyrics and give concerts all over Philadelphia. Tell us about that transition.

Jack: Yes, I practiced law for over 37 years, but I never stopped playing and writing music whenever I could find the time. When I reached the point where I could move into music full time, I jumped at it. As for Law, I never looked back. Since last fall, I’ve been teaching a songwriting course at Temple’s Osher Lifelong Learning Institute in Philadelphia.

Henrik: Wonderful. What a great transition. Ingrid, you are a successful classical violin teacher. Why did you decide to form Last Chance and perform fiddle tunes and new songs?

Ingrid: I’m totally dedicated to my students, but I love to play for the sheer enjoyment. In Last Chance we can create our own music, style, and arrangements, record, and perform for the love of it. We’re doing what no one else is doing. Our music is original and it has a contemporary feel. We craft the songs as we see fit, and we work as long as it takes to get the sound we want.

Henrik: How would you describe your music?

Ingrid: Jack writes his songs in a thoughtful, poetic way. The songs can twist your heart or make you laugh, and each one sparkles in its originality, whether sweet or bluesy or raucous.

Jack: Our music is not limited to any particular style or time frame, but extends across traditional genres, continues to evolve, and appeals to many different age groups.

Henrik: In your many concerts, you seem to be presenting new songs all the time. How do you do that?

Jack: I’ll bring to Ingrid both old and new songs, and we work together to develop them for our performances.

Ingrid: We design each show for its audience. I would be bored if we always played the same songs. We don’t cover other artists’ materials. However, sometimes we’ll add a traditional fiddle song to the set.

Henrik: How did the two of you meet?

Jack: Since 2001, I’d been playing with Whirled Peas in Wilmington. In 2011, our fiddle player and some other musicians left the group. I missed the sound of a good fiddler. When I attended an acoustic jam in Swarthmore, Ingrid was there, playing beautifully. I played one of my songs and she added a harmony fiddle part right on the spot. The song never sounded better.

Afterwards, I told her Whirled Peas needed a fiddler. She fit in immediately, and she rarely has missed a Whirled Peas show since.

Ingrid: I’m so glad Jack asked me to join Whirled Peas. So much of my previous musical life had been playing in chamber music groups that were fairly formal. To improvise and play with other folk musicians was really learning a new style of music for me.

Henrik: What’s the difference and a between a violin and a fiddle?

Ingrid: They’re the same instrument, but called by different names depending upon the type of music being played.  You won’t find a fiddle in an orchestra, or a violin in a bluegrass band.

Henrik: Fascinating. Could you describe the first performance by Last Chance

Jack: We were a duo before we had the name “Last Chance.” I entered a singer-songwriter showcase at a local arts center. Ingrid agreed to join me with fiddle accompaniment. Before we went on stage, Ingrid asked me if I was nervous. I said, “Yeah, a little. Are you?” She said, “No.” From that moment forward, I’ve never been nervous to perform a show with Ingrid.

Ingrid: Ironically, I used to suffer from terrible stage fright. All through music school, I was so anxious while performing. It’s totally different now in Last Chance.

Henrik: How did you come up with the name Last Chance?

Ingrid: We wanted something catchy, simple, and memorable. We’ve both played lots of music before, and this is our “last chance” to play music exactly the way we want. However, when we play weddings, we call our group “Rambling Heart.”

Henrik: Have you had any memorable moments from your shows?

Ingrid: We’ve played for the WXPN Musicians on Call Program at the Philly VA, a home for veterans with very serious health conditions. When we play there, people barely conscious, come alive, start moving to the rhythm, even clapping, and moving around in wheelchairs. We’ve played for people who were at the very end of their lives.

Jack: We recently played a new coffeehouse for disabled people. We played a house concert and donated all the proceeds to Jubilee School in West Philadelphia.

Henrik: Last Chance is known not only for a special kind of music but also for its generosity, and capacity to connect with an audience.

Ingrid: Thank you. We played a house concert in Philly on the same bill with two young musicians who were on the road. We decided on the spot to donate our share of the evening’s fee to the musicians with whom we shared the bill.

Jack: Our most unusual event was for a celebration of a loving couple, diverse in every way. Ray Duvall and Ron Hunter were two gay men from the Philadelphia theater community—one was Jewish, the other was raised Christian. One was white and the other African American. Finally, one was alive, the other deceased. The event was a celebration of life and a posthumous marriage ceremony. We performed “Wouldn’t You Know” that evening, which Ingrid solos on with stunning beauty. She gets too emotional to sing that song now, and we’ve taken it out of our repertoire.

Henrik: I vividly recall those extraordinary moments at the Suzanne Roberts Theatre that night. Your music was so moving most people cried. At other concerts of yours, I have seen the audience snap their fingers and sway their bodies with an energy rarely seen elsewhere. Thank you, Ingrid and Jack!

Last Chance perform Thursday, March 26, 2015, at Lansdowne Folk Club [84 S. Lansdowne Ave, Lansdowne, PA]; folkclub.org/concert-schedule. Check out a full schedule of their shows and their album We Came to Play, on their website lastchance.co.vu.

6 Replies to “LAST CHANCE: From law to lyrics, from classics to folk, interview with Jack Scott and Ingrid Rosenback, Philadelphia’s popular duo.”