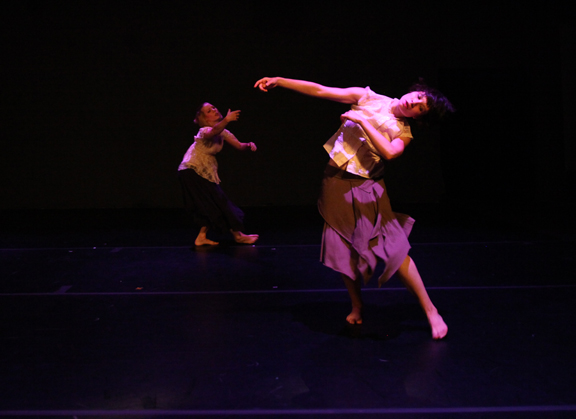 Now in its third year, An Evening of Duets featured twelve different companies from Philadelphia to New York City. Curated and produced by Melissa Chisena, the duets presented ranged “from romantic to the volatile” and were as varying in temperament as their choreographers.

Kalila Kingsford Smith & Grace Stern presented Double Double This That, with a rhythmic interplay of hand clapping and foot stomps in the initial blackout. As the lights came up, the beats created were translated in to movement with multiple variations that were both sultry and humorous during their most creative interplay.

The next duet was between poet, Anne Adele Wight and choreographer/dancer, Melissa Chisena.  Artic Day as Dark Oval presented with Chisena in a fixed kneeling position on the floor, encircled by a black dress in an oval formation surrounding her. Her bare shoulders and back to the audience, she created luscious lines with her arms and intricate movements to Wight’s softly spoken words. As the piece progresses, Chisena rises in a frenzy of spinning, the black oval dress now extends over her torso and head to finally engulf her as she collapses to the floor.

The pace of the evening’s lineup changes as Gina Hoch-Stall and Sara Nye (Real Live People) revisit Hoch-Stall’s former Fringe premiere of Would I Lie To You? As the music begins, the voices of Real Live People Dancers are presented in a humorous yet poignant voice over. Hoch-Stall and Nye pace their movements with varying patterns… separation, contact and even weight sharing, while continuing live with their verbal banter. The entangled movements of these two is blatantly honest, suggesting of how lies can complicate our own relationships.

Allure featured Alicia Shen and Elizabeth Tolis in matching burgundy dresses moving in synch, with flowing and graceful movements that left one transfixed. At times the pathways would shift and vary and then come back together. I found myself distracted by timing issues, but nevertheless was charmed by the piece.

Among the highlights of the evening was Ya Never Know by Lindsay Browning and Scott McPheeters. The scene begins with an uproariously funny video of characters Phil & Phyllis, who draw us in as they express their every choreographic desire. This is perhaps best summed up by Phil, “Don’t push me, I am making mistakes as fast as I can”. Ultimately, Phil & Phyllis determine “what kind of dance” will be created – “snow, still, come together, chase, fall in to each other’s arms”. As this short comes to an end, the video leaves us with snow as a backdrop to present Browning and McPheeters. Humor gives way to sheer beauty with intricate, yet well-defined, paired movement that leaves one with a sense of connection and truly wanting more.

Tara Madsen Robbins’s duet One was based on the complex relationship between sisters and was previously presented in New York as well as at the Edinburgh Fringe Festival. Danced by Marie Brown and Melissa Chisena, the movement showed the intimacy as well as the struggles between this pair. Issues of dominance, unification, support, independence and a life-long relationship are explored to their depths in this touching yet thought provoking work.

The second half of the program began with a duet by musician and composer, Cory Neale and former Jeanne Ruddy dancer Jennifer Yackel. Neale on the upright bass offered accompaniment to improvised movement by Yackel.

New York City based Treeline Dance Works presented for the first time in Philadelphia with an excerpt from A Thousand Faces Within. The piece commenced with stressed and anguished breathing as dancers Caroline Nelson and Jessica Reidy moved through a series of holds and releases as well as circling of one another. At times subtle and then explosive, there is a constant dichotomy of entangled movements that is both intriguing and yet intimately personal. Ultimately, the movement and the piece ends where it began.

Another program highlight was a piece originally commissioned by Philadelphia dance photographer, Bill Hebert called “…of what becomes”. The dance was choreographed by Kun-Yang Lin dancer, Rachel Hart with collaboration from fellow company member, Liu Mo. In this exploration of the physical and emotional, the connection between this pair as they moved was more than evident with graceful lines, extensions, lifts, fluidity and beauty.

For a complete change up in the program, Lauren Putty White/Putty Dance Project danced her duet Humanimal to original music composed by her husband and collaborator, Brent White. Putty White and fellow dancer, Jesse Jones explored how human nature and animalistic instincts are very similar. While laden with high energy, popping and sharp lines, Putty clearly overpowered her counterpart and the connection between this dynamic pair left us wanting. Perhaps this was the intention as the piece poses the question, “When it comes to protecting ourselves and our territory, are we willing to do anything?”

Rounding out the evening was a work choreographed and danced by Amy Lynne Barr with Scott McPheeters titled Easy. We are initially presented with a large brown, Lazy-Boy recliner chair flanked on either side by a folding chair and wood swivel, office chair with Barr and McPheeters respectively. A series of spoken words accompany physicality and movement that is theatrical and humorous in this ironic exploration of chairs in choreography. Perhaps a metaphor for life or relationships, what happens when we transpose movement into the “easiest” and most comfortable chair? Are we truly making things easier or harder? The piece concludes after an exhausting game of musical chairs when Barr and McPheeters worn out, slump together in the inverted “easy” chair. [Community Education Center, 3500 Lancaster Avenue] February 7, 2015; chisenadanza.com,