“Real bodies doing real things”, “real ice cubes”, and a man named Mark McCloughan who is “really good at sincerity” are not the only bona fide components that make up the experimental world’s most timely performance piece.  Also known as THE SINCERITY PROJECT, anti-played by McCloughan, Benjamin Camp, Rachel Camp, Makoto Hirano, Jenna Horton, Melissa Krodman, and Aram Aghazarian, will run every two years, 13 runs total, for the next 24 years, mimicking the actors’ actual lives, each time. The deeply resonant impression the real people working under the direction of Alex Torra, make on all those who watch and wonder, is possible only through the cuttingly honest dialogue and wildly candid storytelling. There is a consistent bending of how much truth and how much creative license is being revealed, governed strictly by an unmoving wooden circle that is the apparent spot where, when sitting or standing in it, the actors must not tell the audience a lie.
The experience is broken up into categories, much like life is full of categorical information and compartmentalization people seem to force on themselves to separate their different, real-life roles.  A section about loss, one called “Versus” and an actual tug-of-war pitting cast member against cast member are all highlights. A perfectly pitched choir accompanies all of the toughest and most celebratory moments, such as the one Ms. Camp explains that being the only project member who is also a choir singer leaves her in a sort of middle limbo in relation to her fellow teammates. The most reactionary part of this mind-tickling engagement (from what I so keenly observed) occurs when Krodman performs her unforgettably shocking yet somehow adorable “divine dance,” which is too blameless to explain here. 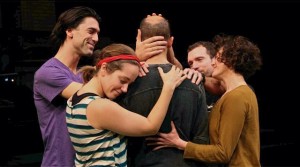 Even after moments of sheer freedom and seriously introspective chats, the cast proceeds to strip away the traditional veil of drama associated with performance art-usually created amongst fussy costumes, frilly props, and distracting sets-figuratively and literally. While some audience members may connect most with the “mysterious and cool” Hirano, or Mr. Camp, the opening narrator who explains that he and his wife are about to have their first child, (a daughter who will touchingly always be the same age as this project), it is certain that everyone will connect with one (or all) of the participants. This memorable collection of heart-to-hearts, sublime movements, and ever-evolving competitions is one you need to see to believe. For real. [FringeArts, 140 North Columbus Boulevard] December 4-13, 2014, fringearts.com.