Excerpted from a review on NealsPaper.com. Republished by kind permission.

Quintessence Theatre’s all-male AS YOU LIKE IT has a playfulness about it that keeps it fresh and sprightly. While director Alexander Burns never lets the sunny tone of his production lapse for long, he leaves rooms for well-considered philosophical moments.

The constant merriment may require a tradeoff for measures of depth and intensity that this AS YOU LIKE IT does not manage, but the forfeit is worth it. Burns and his cast humanize Shakespeare’s characters and provide a smart, jolly time that is tinged with genuine sentiment and elicits a tear to two as savvy comedy gives way to a prettily romantic brace of weddings.

Burns shuns intermissions in this three-hour presentation, opting instead for four “interludes” of varying lengths, during which members of the company, in character, do a kind of music hall, performing contemporary or stylized numbers that pertain slightly to the condition of their characters. The peace and leisure of life away from the formality and treachery at court appeals to the exiled Duke Ferdinand (Paul Hebron) and his comrades, who have been forced to trade the amenities of court for Arden. It is this thoughtful contentment that pervades Burns’s staging. 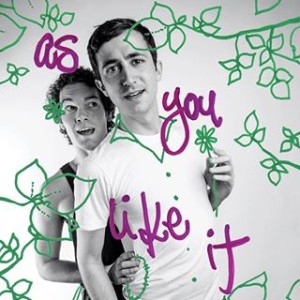 Only Jaques (James-Patrick Davis) is restless, yet he is so intellectually curious he eagerly seeks out people who he thinks can entertain or enlighten him with their adventures, ideas, or beliefs. The others take to Arden as more of a refuge than a place of banishment and come to regard it as a haven where they can pass convivial days and find sport of many kinds.

Shakespeare shows us enough of the court for us to see the difference. The usurping Duke Fredrick (also Hebron) is not so much a tyrant as a man of temper who can also indulge in paranoia and the long holding of a grudge. Afraid his niece Rosalind (Alexander Harvey) Cis more popular than his daughter Celia (Andrew Betz) and worried that people might feel favorably about the exiled duke because of their high regard for Rosalind, he casts her from his duchy on threat of death, not realizing Celia will flee with her.

Burns cast his production with a keen eye. As Jaques, Davis deadpans his lines in a way that makes them sound thrillingly original and new even to hearers who can recite “The Seven Ages of Man” and other passages along with him. Male actors Harvey and Betz as Rosalind and Celia are two of the most charming and natural women you will see on a stage. Each has an insouciance and grace that produce the effect of refined femininity, and each can vie with Davis in providing wit and a naturally brainy aura to their characters.

Harvey and Betz anchor the production. Harvey makes Alan Brincks’s performance as Orlando stronger and more focused. At the top of the show, when Orlando is complaining to his family’s loyal long-time servant about the mean treatment he gets from his older brother, Brincks’s rhythms and volume sound more like a recitation than spontaneous, heartfelt words. His scenes with Harvey show a give and take that sharpens Brincks’s approach in passages with other characters; you see his naivety and a sweet desire to be tutored in the finer points of man-woman relationships.

As usual, Shakespeare, that first psychologist, observes mankind so perceptively, ascribing and describing any behavior and backing it up with lines people in given situations are likely to say. AS YOU LIKE IT paints an accurate picture of the differences between men and women and the different types of love — courtly love, pastoral love, and even masochistic love. Burns makes these parallel love stories funny and human while making sure one romance comments on another.

One Reply to “AS YOU LIKE IT (Quintessence): Do you not know I am a woman?”