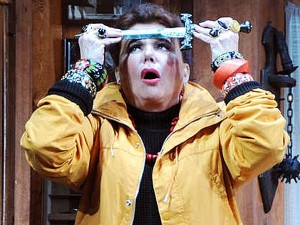 One of the most successful plays in Broadway history makes its way to the iconic Bucks County Playhouse. DEATHTRAP is a mystery/thriller (brimming with bleak humor) by Ira Levin (“Rosemary’s Baby). DEATHTRAP is the story of a once-famous playwright Sidney Bruhl (Saxon Palmer) with an enormous case of writer’s block living with his beautiful wife Myra (Angela Pierce) in Connecticut. Young writer Clifford Anderson (Raviv Ullman), who has admired his work, sends his murder mystery script to Bruhl to review, sparking Bruhl’s admiration and jealousy. Although warned of impending dangers by his clairvoyant neighbor Helga ten Dorp (Marsha Mason), he lures Anderson to his home under the guise of collaboration, setting in motion this story of deceit, betrayal, and greed.

Directed by Evan Cabnet, DEATHTRAP supplies surprising curveballs throughout the show. The show-stealer is clearly the set (Anna Louizos), impeccably contrived and masterfully created; viewers discover new details at every turn. However, I was a bit disappointed in the delivery: the story itself starts a bit uneven as the actors try to lay the framework for the show and have several line missteps throughout. Despite the downfalls, the actors do push the viewers to question their motives. Who is a liar, friend, killer? [Bucks County Playhouse, New Hope, PA]. June 19 – July 13, http://www.bcptheater.org/shows-events/deathtrap/.