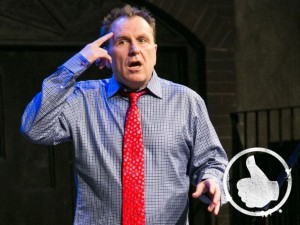 While we laughed non-stop, Brooklyn’s Colin Quinn took us into the heart of the American darkness with a verbal flashlight, illuminating the present. “The American Constitution,” according to the book of Quinn, “it’s four pages long. No one has that kind of time.”

Let me say it up front: Unconstitutional, running through July 6th at the Philadelphia Theatre Company, is a tour de force stronger than the Tour de France.

The famous Quinn, familiar to Saturday Night Live fans, presents his observations on the quirks of life in the U.S. at such a neck-breaking pace that I thought I was participating as a bidder at an auction, where the auctioneer speaks at world record speed so that I, as one of his “bidders,” was unsure at times if I was buying or not. So as not to miss his many powerful insights, wrapped in highly addictive humor, I was forced to listen carefully. And listen I did.

The next day, the comedian who has entertained millions, gluing together historical events and the foibles of human beings, then and now, answered my questions—well, most of them.

Henrik Eger: Colin, how have your perceptions of the U.S. evolved as you studied American history in creating Unconstitutional?

Colin Quinn: My studies and view of America have changed. One of the frustrations that I have is that we’ve almost thrown the baby out with the bathwater. In righting a lot of wrongs, we also dismiss any of the positive aspects of the earlier times.

For example, the 1950s, today, are characterized by their hypocrisy, banality, and conformity, but there were also standards, discipline, and common sense that were lost along with the rigidity.

HE: Where did you find the many details about the founding fathers for your historical show, especially as James Madison had destroyed most references to his personal life?

CQ: I didn’t find that many facts about Madison that were outside of the books written about him. I looked at quotes, and just imagined the mindset of a man who’s shorter than everyone else, who grew up rich, but was never “one of the guys.” And then I just arrogantly profiled him, based on the info I had.

HE: It seemed that the words were coming out of your mind faster than your throat and mouth could deliver them. Is it possible that new thoughts and jokes hit you in the middle of a performance, creating new improvisational comedy?

CQ: Sometimes new thoughts or jokes hit all comics during the show, and when they happen, it’s the happiest time for us.

HE: Given that you’re addressing a wide-ranging audience—different ages, educational backgrounds, income, ideologies, etc.—how do you make your show relevant so that both sides of the aisle are laughing in unison?

CQ: I don’t care about both sides of the aisle. It’s just my personality to feel like there’s got to be hypocrisy on any side and in every person, myself included.

HE: Your show was directed by Rebecca A. Trent, described as a “one-person comedy industry.” Could you tell us about that process of working together and compare it to your work when Jerry Seinfeld directed you in the popular Colin Quinn Long Story Short?

CQ: Rebecca’s knowledge of comedy and love of comics had a big influence when we worked together. And she’s also a Virginia girl who has her own feelings on the Constitution and America. She’s funny and brings humor to the process.

Jerry is a master, of course. He’s got the eye for the joke like few people do. He’s also a great editor. He would jump up on stage and show me how he thought it would look. It was pretty charming to see the legend up there acting out a piece. He’s an amazing friend, too.

HE: In your one-man show, Colin Quinn Long Story Short, you channeled the demise of various world empires. In Unconstitutional you skewered the contradictions in the history and the life of America. Pray, what’s next in your creative life?

HE: We’ve seen you as a high-energy, intelligent, and sharp-witted comedian. How do you, as a mensch, strike a balance in your personal life?

CQ: I don’t. My personal life has always been banal, yet disastrous.

HE: You seem to be as tough with yourself as you are with the founding fathers and their arrogant and foolish great grandchildren today.

With all of your hard-hitting criticism of the foibles, the ignorance, and the cruelty in this society, we saw in Unconstitutional a deeply committed American artist. Mark Twain would be damn proud of you, Colin Quinn.