Multimedia theater designer Jorge Cousineau is moving abstract objects under the rustic dance studio in the Maas Building in Northern Liberties. Niki Cousineau is rehearsing with her Subcircle dancers for new piece  All This Happened, more or less, the title is the first line of Kurt Vonnegut’s modern classic novel Slaughterhouse Five, which figures in the Cousineaus dance memoir that examines their creative and personal life together, raising two children and establishing their company Subcircle.

“I’m not afraid of the personal. It feels like in our work together, it’s a good time to think about these things,” Jorge intimates, “In many artists careers they need to look back and take stock of where they are and where they want to go.”

With “All This Happened, “ the Cousineaus wanted to examine the process of how they have collaborated on creative process. For the first time Jorge will be performing onstage with Niki and their troupe of frequent Subcircle dancers Beau Hancock, Rosie Langabeer, Christy Lee, Scott McPheeters and Christina Zani.

“It was both our idea that I be in it, this is our 15th piece together. We crossed paths 20 years ago and then really connected 18 years ago. Then we realized we were meant to be together and wanted to be together, and all this stuff happened,” Jorge said.

Time puzzles
“All the pieces we have worked on, I’ve been in the background, creating sound scapes and video, making the space in which the performance happens real. We thought we should include that as a concept in itself… So we started rehearsals with just the two of us in this room, with all these objects, pulleys and old mirror, but the improv feel is now gone, it’s more structured, but there are pockets that are now completely clear.”

“My design right now is driven by these weird objects made of foam core.”  Material that he retrieved from the trash and is re-sculpting for this project.  “The design idea was to build a really big structure and break it down and then organize the piece about the reconstruction of what those pieces are- what they mean, where they belong, how they create a new relationship. There objects have a new life and meaning.”

Niki’s choreography, Jorge’s video/sound designs and the sculptures are meant to be equal ‘protagonists’ in the piece. “Niki and I always talked about a structure that would collapse in context with All This Happened,” he explains, “As a retrospective our life, what led to where we are and on a larger scale where we’re heading in the world. We’re at a point where everything is complex, sometimes you just feel like it would be beneficial if we could start over or if things would break, down completely and be forced to rethink things. “

You must remember this
The section the Cousineaus are rehearsing with the dancers that “is a remembrance of original choreography of Banking Hour a piece we did from 2000. Then have the other dancers are playing with the material in their own way. Then there are sections that was developed with everybody goes through memories, what they were doing in those years and how would that look if you compress it into five minutes and the company members recalling memorable choreography they danced of their years, not related our company.” 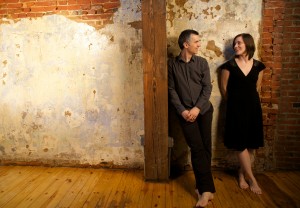 Beau Handcock’s image is projected on the wall speaking about dance and now, Jorge explains Hancock

“Can’t be here physically because of another engagement. We filmed him earlier for two sections. We did a version previously, where Beau was speaking text and it was so interesting because Scott and Beau are in a relationship and in those years, they hadn’t met. So that gave it a whole different meaning.”

The image of Hancock may play into Jorge’s remembrances for the piece, “Cousineau is going to talk about his tech and creative work remembrances in a ‘tech-talk’ computer transcribed voiceover.  It will talk about Slaughterhouse Five and Dresden, Germany, my hometown, my grandparents, who survived the Dresden bombing in 1945. And both by chance, as I realize now. They had my mother shortly after, and I was born in 1970. That personal history might flow into it. “Niki will be doing live narration of her timeline, “he said, drawing the vital distinctions of “an actual timeline and the remembered, emotional timeline, the way we stack events in our memories is not necessarily accurate,” Jorge says.

Stage directions
Jorge mainly works in theater and during the last weeks preparing ATH, he was simultaneously working on the video/sound designs for the Arden Theatre’s new adaptation of Anton Chekhov’s Three Sisters. “I don’t work on any other dance projects than Subcircle, which I don’t even want to think of as dance-dance, we call ourselves performance installation and a lot of it has to do with the space. It includes dance but it is not limited to that category,” he said.

As a performer Jorge doesn’t have any formal training, so says that he and Niki are “developing his moves together,” Jorge confesses. When Niki returns to the studio and hears this she jokes “He’s lying!…just kidding, actually yes, Jorge and I are both developing his choreography. It’s hard to choreograph for someone who is not used to moving onstage. But, he’s been onstage as musician with dancers and he’s been in the ‘techies’ dances at the Rockys. He has certain Jorge ‘isms’ that can crack me up.”

The Cousineaus have been working on their duet sections separately from the other dancers and . The other  dancers don’t have a feeling for the whole yet. And this is the first time I’ve worked this way. Usually I’m making a group piece and we’re all in it for the whole process. “

Even though Niki is a seasoned dancer she admits to “a moment in the piece, when we rehearse it, that I’ve gotten emotional every time, I’m not used to being in that moment facing him. He does such a good job with collaboration on all of the other things, but then to be with all the other dancers and Jorge there too, I haven‘t gotten used to getting through rehearsal without getting emotional,” she admits.

Niki echoes what Jorge observed about the dancers they have been working with, this….wonderful group that I’ve been working with the past couple of years. And I feel like we’ve really started to gel as a company who can find language through improvisation,” she said, adding that it is improvisation is always “a very slippery thing. A puzzle. what’s the safety if something goes wrong. Recognizing our trust. Can we dump all the blocks out and show collaboration?” Niki asks. [The Performance Garage, 1515 Brandywine St.] April 3–5, 2014, philadanceprojects.org.