Josh McIlvain is into collaboration.

He and Deborah Crocker (his wife) co-founded theater company SmokeyScout Productions in New York City in 2008. Since moving to Philadelphia in 2010, the company has put on six collaborative productions in Philly and its outskirts (like Mt. Airy). SmokeyScout has really begun to draw attention to itself with Nice and Fresh, an ongoing performances series which began last year as a collaboration with John Rosenberg’s Hella Fresh Productions (now relocated to the west coast). Presenting four original short works per month, the series straddles the most experimental dance and theater in Philly, and draws local gems such as Megan Mazarick, Jenna Horton, Annie Wilson, and Shannon Murphy, among others.

And now, AMERICAN WISDOM, a mainstage collection of three of Josh’s one-acts, is a handshake between Philly and New York, featuring actors and directors from both sides of the ancient and abiding divide—and performing for one weekend in each city. What’s more, it was launched through an IndieGoGo campaign, representing McIlvain’s collaboration with his audiences.

Josh took a break from a busy city-hopping schedule to sit down with Phindie editor-in-chief Chris Munden and talk about making a living in theater, National League East predictions, and some good old American wisdom.

PHINDIE: How come things sound cooler when you preface them with “American”? Like “Pie” “Beauty” “Gigolo” “Psycho” “Werewolf” don’t sound as good on their own, or with “Canadian” as the adjective.

JOSH MCILVAIN: Because American starts with an “A” which is number one in the alphabet, just like we are number one as a nation.

PHINDIE: How did you come up with the title? Is there something that links the three pieces in American Wisdom.

JM: I think all three plays are about contemporary American life. In some sense, though the plays are very different, there are common themes of money, personal philosophy that helps supersede current circumstances, and the ideals people are living towards. Everyone has created their own world and in some way seeks to justify it, which is a very American thing to do.

PHINDIE: You’ve spent about half your adult life in New York and half in Philadelphia and started SmokeyScout Productions in NYC before moving it to Philly, so tell me, who has the better National League East team?

PHINDIE: No really, what are some of the differences in putting on theater in the two cities?

JM: I think the DIY attitude is a bit stronger in Philly. In New York, very generally speaking, productions by companies like mine are often [created] to attract someone’s interest in order to be asked to do your work in a bigger, better theater. I am not interested in our productions being auditions for something else. Every time we do this kind of show, audiences should feel it is the definitive version. In NY you cannot help but feel a pull to Broadway because, frankly, that’s where people can make a living. It would be nice to have more options in Philly to make a living creating theater. On the other hand, it seems that Philadelphia is becoming more and more about creating original work, throughout performing arts disciplines, and there is more of a mix of disciplines percentage wise. (It’s hard to believe that NY doesn’t have more of everything numbers-wise)

But I really have no idea what I am talking about since I haven’t made work in NYC in five years. And I have two young children so I stay home a lot so I can’t really speak with authority about Philadelphia either.

PHINDIE: American Wisdom is co-produced in the two cities, tell me a little about how that came about and what you liked about it? 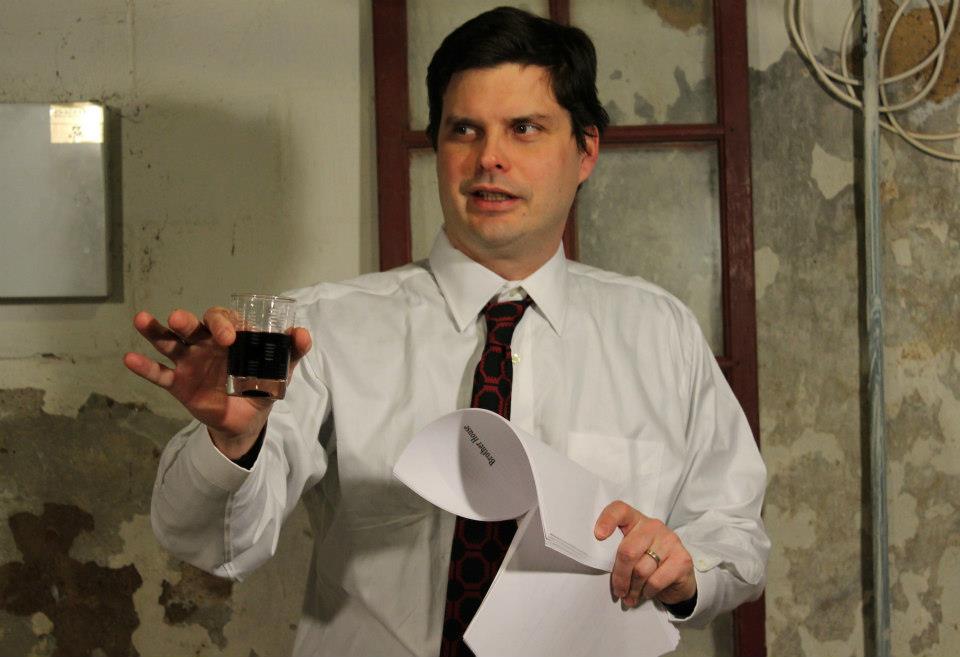 JM: SInce Deborah (Crocker, co-prodcer and wife) and I both lived in NY and have a certain comfort level with the city, it seems to make sense to start expanding there—and obviously it is the place for the theater in America, so if you can build an audience there that will be a good thing. Also, instead of always doing 2-3 weekends in Philly of a show, why not take one of those weekends and do it in NYC. Generally speaking, you won’t decrease your audience with less shows. It also gives me an opportunity to take Philly talent to NY and visa versa—half this cast in NY-based, with people I’ve worked with before. It’s also cool to introduce NY talent to the Philly scene. You would never get to do a show in a place like the JUNK performance space in NY, those spaces—an old church sanctuary with an open floor and 40ft vaulted ceilings, just do not exist [in NY], or are way out of my price range.

I have had a lot (like around 40) of my one acts performed there in various festivals and short play nights.

JM: Yes, though New York is daunting if you haven’t lived there and don’t have a place to stay. It is easy to find space there, however, but very hard to get a crowd if you don’t know anyone. People will not come by coincidence. I’m surprised that more New York companies don’t come to Philly, because there are more—or less crowded—avenues to get the word out, and we’re more hospitable.

PHINDIE: SmokeyScout has used the Performance Garage for a couple of its Fringe shows, had some shows in the Circus Arts school in Germantown and this production is in Brian Sanders’ space, is there something you like about dance/movement venues for theater?

JM: Yes, they can be very open and expansive and yet the audience can be sitting very close to the stage. I think they force you to unburden yourself of a lot of theater’s formalities.

PHINDIE: I saw a production of one of the plays, Waiting for the Boss, a year or two ago. It’s about two workers waiting for a boss. I think we talked at the time about how few plays focus on work relationships. What attracted you to this subject?

JM: People spend a lot of time and emotion with other people they don’t necessary like or know that well, and then go home and pretend that’s not what their life is about; they try to shut out those hours. Yet those hours take up a lot of one’s life, and those dramas over work or clashing personalities can be quite intense and reveal a lot about a person. Those are vanished moments I am interested in bringing back. It’s like people try to dream their way out of letting those hours affect them. There is also something very interesting about those who are so into identifying themselves with their job, especially when they probably shouldn’t, and certainly when that workplace betrays them, or when that person realizes that no one else is sharing their dream.

Plus, I just find it fascinating to look closely at what people actually do with their day. The stage is a great place to do that. I like to take very real situations where people are naturally theatrical and put them on stage.

PHINDIE:  It’s like an employment-based Waiting for Godot, right?

PHINDIE: Tell me a little about the other pieces and their performers.

JM: For the Dogs is a one woman play about living one sickness away from financial disaster, and not letting life’s impediments block a couple from loving each other. It’s performed by Anna Watson, who is just amazing. The other play THANKS FOR THE PLANT, THANKS FOR THE CONE is about a neighbor who has lost her cone, a neighbor whose plant has died, and the neighbor who wants to helpful. It features Josh Lay, Thomas DeMarcus and Valerie O’Hara, and is directed by Chris Czyz—it’s the NYC contingent. I’ve worked with all of them before except Valerie. Thomas and Josh are super talented actors and performers, Thomas in the national tour of Spamalot, and Josh has done work for Jimmy Fallon and was once the mascot for the NJ Devils—so I’m looking forward to seeing what they do with this nasty little play.

PHINDIE: Wow, American Wisdom sounds awesome! How can I get tickets?