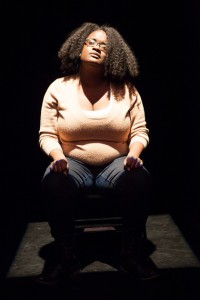 Over time, the very nature of identity changes—or at least our conception of it, and ways of presenting our identities, personas, and profiles—and so do the forms of the art which express it. The choreographers behind Hybridge Arts (Britney Hines, Sam Tower, and Kelly Turner) implement cutting edge techniques and forms, but it is against this backdrop, the cave painting, that their work is best considered.

Four years ago, a group of students graduating from Headlong Performance Institute started Hybridge as a logical first step in their careers. That group eventually boiled down to three—Kelly, Britney, and Sam—but until ID:3, last month’s showcase of original compositions by the three founders, they had poured its energy into curating and presenting other choreographers’ work.

“We all had pieces we were thinking about that really did speak about the concept of personal identity,” says Kelly. “I think three pieces that are about personal identity that are done by very different people can be very interesting.

ID:3, which ran only one weekend in February, was certainly not boring. The press image for ID:3 was a fractured bathroom mirror over a sink with a few personal items. In the margins are primitive drawings of faces in sharpie on the bathroom wall.

The night opened with Britney’s “SBF: Single Black Female,” about a young black woman exposing her inauspicious OKCupid adventures on her YouTube channel. The story is one of race—a young, uncertain woman pinioned between her affections for a white man, her past experiences, and the online horde’s venomous opinions about interracial love.

One woman’s true identity, a solid force, clashes with the diffuse collaborations of online identity defined both by her input and others’ takeout, then suffers a breakdown which seems half emotional and half electronic, while internet trolls—negative commenters—blithely participate in her mental dismantling.

Kelly’s four-dancer composition, “BEAST,” begins when three young women in pretty dresses enter columns of light and dance singularly. A man weaves in and out of the columns. As he enters a column, the dancer stops dancing and applauds slowly. He stalks slowly through her light, observing the unenthusiastic, mechanically-given applause, but not really accepting it. Then he exits her column of light and she goes back to dancing.

Disconnected scenes abut one another, suggesting a pattern or a narrative but not fulfilling it. At one point, the four performers stand downstage in a line, making series of fawning expressions directly at the audience. This continues for long enough that it is agitating. Near the end of the play, they take turns forcefully telling the audience “I was right.”

Where Britney’s main tension was between the reflexively self-asserting identity and the persona it creates, in “BEAST,” identity gets no stage time. Persona is what matters, and it’s a fragmented, dangerous thing, like a Picasso portrait, a collection of jagged presentations.

Kelly says, “It’s about a lot of what I think are the more selfish and more self-destructive parts of myself. And having all of those be like relentlessly on-stage, the piece is meant to be like a very,” she considers, “a slap in your face.”

If Kelly’s piece is about missed connections within a single mind, Samantha Tower’s piece, “THE TRAVELERS,” describes the separation between individuals, and voids in space which individuals fill.

Against the nihilistic backdrop thrust salients of frenzy and near-connection. In one brief scene, a dancer repeatedly throws cups of water in his own face. A row of cups waits, invisible to the audience and uncountable, on a windowsill. He expects something from each splash, and nearly achieves it. He attacks himself again and again, each time with certainty of release and subsequent frustration.

“You see bodies,” says Sam, “and textures of light”—fragmented prisms of white light on the black backdrop—“and you see them all working together. That inspires you to fill in that situation with your own past or your own yearnings, your own desires.”“THE TRAVELERS” explores the expectation of a train that never arrives. Identity flickers into existence in that moment that the train does not, and is most awake when it’s so tied up in desire that it’s blind to its surroundings.

At some points, profound physical contact is achieved. In a movement which Sam repeats several times, one dancer sits on a bench gazing out, another approaches and then climbs laboriously over the first’s shoulders, the first guiding her along; neither acknowledges the other. They connect, but do not conjoin.

“We’re never really saying what we mean,” says Sam. The pieces included in ID:3 contain patterns of truth. Identity is a beast whose shadow can be traced on a wall, whose shape can be illuminated by labels or intentional profiles, but these are at least a partial lie, limited by the particularities of the medium. Truth, they suggest, is a destination which we never quite arrive at, and the greatest lie is to claim that we can define it.