Okay, Kevin Allison’s RISK! is the undisputed G-spot of the 12th annual First Person Arts Festival. The format is simple: five people step behind a microphone and relate their most private thoughts in the form of a story to an audience of strangers. This year the storytellers roster consisted of: Dawn J. Fraser, Kitty Hailey, West Mt Airy’s own, Katonya Mosley, Andrew Panebianco, and Katie Samson.  The one rule of the evening: twist stories loosely around a common theme of the night. Saturday, November 15th theme was “Excitable”. Anyone who has ever been to a First Person Arts Story slam knows the deal, but kids, kids, kids, this is not your average story slam. Why? 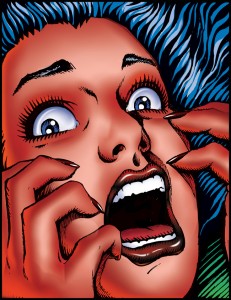 Because, Kevin Allison, that’s why! Allison has served as the ultimate MC injecting his Ohio-midwestern charm into every show since the inception of his RISK! at  Arlene’s Grocery in New York City in August of 2009.  On the First Person Arts Festival’s program it reads: “It’s About to Get Personal.” So acting on that cue. Allow me to get personal for a second.

In August of 2009, I auditioned for the role of lifetime: Elma, the young waitress in William Inge’s classic play Bus Stop at Montgomery Theater. The audition, I nailed it.  Tom, the director, allowed his actors to all perform in front of each other. Perhaps, because everyone performs better in front of audience? All I know is I felt it in my bones that I would get Elma.

A day or two later, I got an email from Tom that read: “So sorry but I will not be able to offer you the role of Elma.”

I have no words to describe just how seriously distraught I was. I was living in the basement of my father’s funeral home to allow me the chance to work in theater, but if I can’t get roles like Elma, what is the point of any of it? I felt it in my bones and still didn’t get it? I didn’t even trust my own bones. I had to get out of the my father’s funeral home, out of Philadelphia!

Jumped on a bus to Bushwick, Brooklyn to see my badass bass play’in book keeper, Brian. At this point I knew Brian since 2004, in college and he was always and forever bugging me to visit him in Brooklyn to see him. We liked each other, but I barely ever make it to Brooklyn. My plan was I would go to Brooklyn, marry Brian and just dissolve into the oblivion of his Brooklyn studio apartment.

Exiting the L-train subway I was underwhelmed. Brian’s Bushwick looked post-appocolyptic: vacant, lots in the white hot Augustnoon sun were blinding. I called Brian on the phone to get directions to his loft. I was pissed off that he didn’t meet me at the train, and now I’m surrounded by vacant houses, hipster-trust fund kids from Ohio, flocked around the one shiny café serving up counter culture espresso at $5 a shot. (But apparently he wasn’t kidding when he said he hated to leave his apartment before 9pm.)

Finally, after making my way to Brian’s 4 story walk up, I found him sitting on the couch, the air conditioner on full blast. Dropping my backpack on the floor, I dropped to my knees on his hardwood floor, resting my forehead on the cool hard wood floor I said: “Brian, Inge-Bus Stop- I- Didn’t-Get-Elma!-I just want to live in this spot on your floor.  I can pay rent. Just don’t make me move ever!

My full on melt down went on for a while longer, I can’t exactly say how long, but hours later, I was sitting on Brian’s couch, beer in my hand, and laughing at MTV’s sketch comedy show, The State the full series on DVD. Brian said like three times:

“Yeah, the red-headed guy, Kevin Allison?” I saw him on the L train, with his boyfriend at like 5 am and he told me I should take a story telling class at the Pit.”

In all seriousness, the State coupled with copious amounts of alcohol restored my will to live. Kevin Allison was 22 years old when the sketch comedy show, The State was picked up by MTV in December 1993. Featured the raw talent of the Allison, Thomas Lennon, Michael Ian Black, and Michael Showalter just to name a few.. After hours of watching sketch after sketch I thought who needs Inge? Who needs directors to decide to put you in stuff? These eleven young kids from NYU made their own brilliant eff-ing show!

I eventually left Brian’s apartment and hopped a bus back to Philadelphia. Where I found an email in my inbox from Tom at Montgomery Theater asking if I was still available to take the role of Elma in Bus Stop. (The extraordinary lovely and talented Emily Kraus too busy with course work at Temple to do it). So, no I did not marry Brian, but I did get to be Elma.

Brian never took Allison’s class, and I suspect that he would be horrible storyteller because he barely ever leaves his apartment.

To be a great storyteller you gotta live with your hypothetical balls out, and you take action making your own fortune. On Saturday, November 15th, Allison opened this in 90-minute installment of RISK! with a story about the month before MTV picked up the State. 22 year old Kevin didn’t know how he was going to pay the rent.

I suspect Allison’s show is called RISK!  because in order to succeed in show business you have to put yourself on the line, and live an all or nothing kind of lifestyle. I hope on buses and propose to men in Brooklyn when I don’t think I will get epic roles like Elma, the waitress, and Kevin well— he explained:

The future of The State was uncertain, and 22 year old Allison thought about pursuing a life in prostitution. (Haven’t we all, but thank God that career path didn’t work out for Kevin) Allison’s brand of self-effacing Mid Western charm belongs on stage behind a microphone like the one at Christ Church Neighborhood House on Saturday, November 15th.

As he does year after year, Allison gathered the very best storytellers: Dawn Fraser, the host and producer of “Barbershop Stories” spun a tale about her run in with the Brazilian police. Although, the stand out story of the evening came from the pillar of strength and humor Katie Samson, who incredibly recounted how she reclaimed her life after becoming paralyzed from the neck down in a horrible sledding accident in the second year of college. Samson ended her heroic ultra personal tale by saying: “I got game.” I left thinking: “Yes, she does, yes she does.” November 15, 2013. firstpersonarts.org.