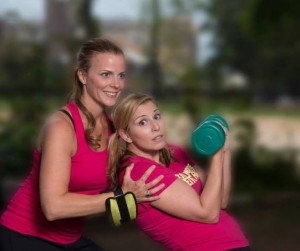 Lunging onto the stage with the gusto of 1000 aerobics classes, HANDS ACROSS VERONICA sets the tone for a high energy, neon fueled performance. Many of the scenes to come take place during the almost ritualistic exercise classes of the main characters Veronica (Shelli Pentimall Bookler) and Aubrey (Kirsten Quinn). Though the leading ladies are slim, the chorus of three women that sporadically interject song and dance numbers, are bodacious to the plus size max. The intention of this stark contrast in body size is never addressed. Since HANDS ACROSS VERONICA is primarily concerned with how women relate to food and deal with their body image, it seems against the mission of the play to have a chorus of “Phat Ladies” only supporting the story of skinny obsessed women, never clearly defining their roles or personalities.

With abrupt changes between musical and play, method of delivery, and tone HANDS OF VERONICA never seems to strike the right balance between comedy and commentary. If the message had been more focused and deliberate, the action could have fit neatly into one act instead of two. As it were, the length felt unnecessary for a play that didn’t delve deeply into the questions it asked. Still, thought and laughter were provoked, and even though some of the mechanisms used were flawed, it was overall a fun and refreshing look into age old issues of weight and body image. Co-produced by Walking Fish Theatre and Nakedfeet Productions. November 7-30, 2013, walkingfishtheatre.com.