Okay, this production had a short run of only six performances. Opening on November 6 and closing on November 10. Still (drum roll please): I have the distinct pleasure of introducing to you, Murmuration Theater, the melding of the creative forces of four Swarthmore alumni: Nell Bang-Jensen, Jessie Bear, Brian Ratcliff, and Isa St. Clair, a self-described “collection of actors, playwrights, dramaturgs, designers, and artists”. 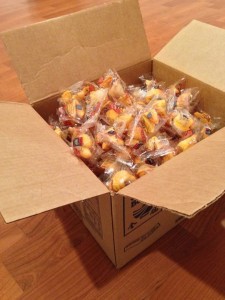 Ten seconds into Murmuration’s inaugural production of Jessie Bear’s brand spankin’ new play, MAKESHIFT, Brian David Ratcliff, stands like a little boy by his lonesome on stage in what he describes as a devastated post-apocalyptic earth donning a royal blue super hero cape, goggles strapped to his head, holding a tape recorder up to his mouth declaring: “I, Michael Bolton will save the world.” I thought: “Wow, we are really on the edge of a cliff here, and Oops, I think we fell off into—I don’t know what.”

You don’t always have to know exactly what is happening in a play. It is okay to have the carpet pulled out from under you, to lose everything in a foul swoop. Surrender to disorientation. This is essentially what Bear’s play is about. Director M. Craig Getting lends a smoothness to the execution of this magically realistic production expertly intertwining scenes between two ordinary people, roommates, Trisha, (Nell Bang-Jensen) and Matt (Brian David Ratcliff) grieving over the death of a loved one, Emily by the glare of the television into fire-lit scenes between their fantastically bad-ass alter-egos, Julia and Michael Bolton (also played by Jensen and Ratcliff).

Still, this play is on the verge of being overwritten. The constant oscillation between the two realities does get a bit tedious. (Key to magical realism: the scenes with the magical people serve as the subtext for the ordinary ones.)

One moment that is lodged in my head: Trisha bakes a two decker vanilla cake with rainbow sprinkles for Matt, carries it into the living room, says: “Happy Birthday”, and throws it on the floor. The cake is smashed. Trisha exits only to return a moment later. Matt, a journalist on a deadline, typing on a laptop looks over at the devastated cake and asks her: “Why?”

Trisha says: “Because I thought you’d like it. I wanted to surprise you. I spent all day making the cake. “ Together they clean up the icing-cake-wreckage, mourn the loss of this cake, and the cakes of their childhoods and then bust out laughing.

Maybe I am alone here but what I saw in this moment goes beyond a cake’s fluffy vanilla goodness ruined to bits on the floor. The cake Trisha bakes encapsulates the experience of American young adults. Recent college graduates who lived through disasters like 911 and Hurricane Katrina. Kids who accumulated a massive amount debt in student loans to attend college and upon graduation, as they are joining the American workforce the economy collapses on itself. The Federal Government shuts down. Congressmen spend two weeks tossing the term “parliamentary inquiry” back and forth like a tennis ball at Wimbledon. What else can we do but laugh? As Trisha says: “Hey, at least we have milk.”

Just try taking your eyes off the luminescent Isa St. Claire as the sweet figment of imagination, Calalily, and the pragmatic psychic, JT. St. Claire  gracefully allows the English language to wash over her. She studied across the pond at London’s British American Drama Academy, but training aside St. Claire, as you may already know just devoted many months to the role of Shakespeare’s Juliet in Curio Theater’s daring interpretation of Romeo and Juliet. You spend months working on Juliet, and language will wash over you too. November 6-10, 2013. murmurationtheater.wix.com,

Read another Phindie review of this show.

One Reply to “MAKESHIFT (Murmuration Theater): A play not just about cake”