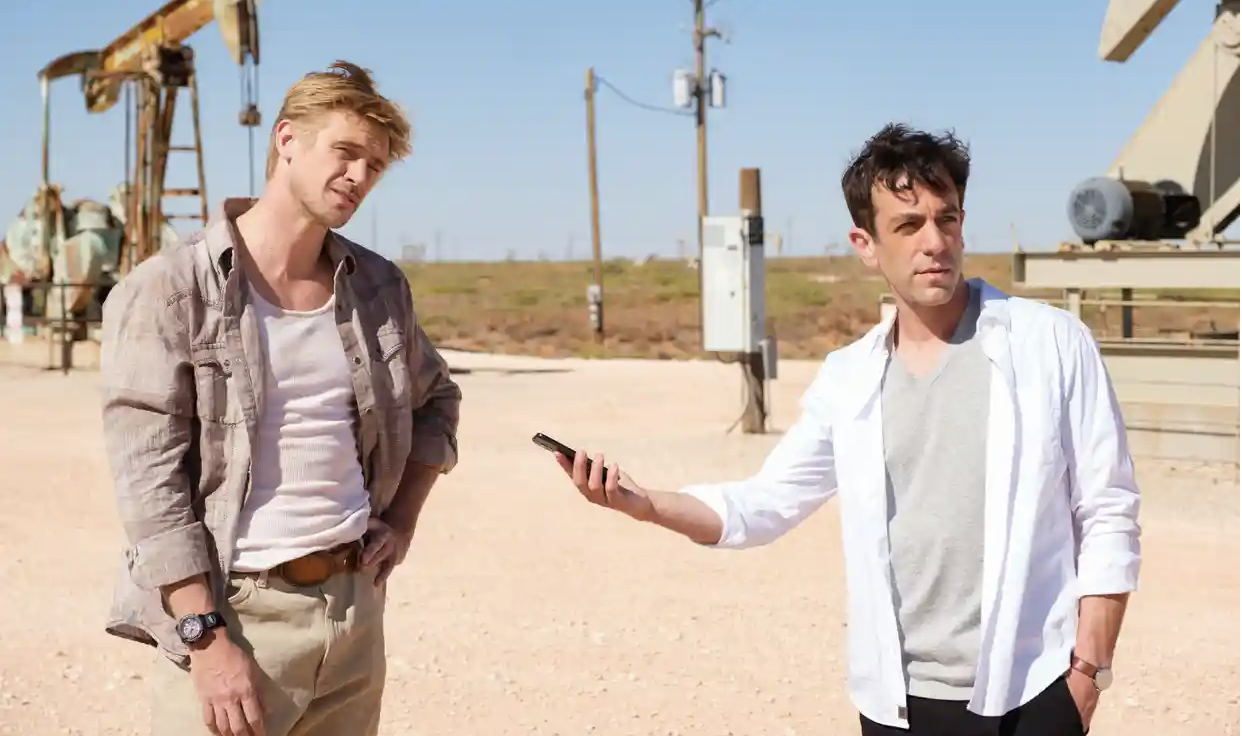 Vengeance walks a pretty confident tightrope as a crime-focused, West Texas-set black comedy with more substance than a deep-fried Twinkie. It never really comes across as a filmmaker’s first time at the helm, and yet, this is B.J. Novak’s feature directorial debut. Known for playing Ryan Howard in The Office (of which he was also an episode writer, producer, and director), Novak hands in his chits and makes a tastily southern-fried, smartly observed dark comedy about the line between journalism and exploitation and the red-blue state divide in America.

Novak stars as Ben Manalowtiz, a writer for The New Yorker who’s also a podcaster looking for a good story. One night after going out with wingman John (surprisingly, a naturally funny John Mayer) and having a regular hookup with a young woman, he gets a call in the middle of the night. It’s a man named Ty (Boyd Holbrook), the brother of Abilene “Abby” Shaw (Lio Tipton), one of Ben’s former hookups. Thinking Ben and Abby were actually in a substantial relationship, Ty breaks the news to Ben that Abby’s body was found in an oil field. This sparks a fire under Ben’s butt to get to Texas for the funeral, where he’ll get close to Abby’s family, record everything, and turn it all into a worthwhile story full of “local color” for his podcast. Things get even more interesting when Ty believes Abby was murdered (even though the cause of death was ruled as an opioid overdose) and wants Ben to join him in avenging his sister’s murder. It is sensationalistic and opportunistic on Ben’s part, but the pitch excites Ben’s producer Eloise (Issa Rae), and maybe the podcast, dubbed “Dead White Girl,” could be a surefire hit.

Vengeance does initially feel like a pretty standard “mistaken identity” setup that leads to some fish-out-of-water comic situations. Early on, Ben ends up being asked to give a brief eulogy at Abby’s funeral, even though he didn’t even know Abby well enough or that she was an aspiring singer. Later, when he’s already ingratiated himself with the Shaws and attends a local rodeo, Ben is the only one to stand up and cheer for the University of Texas, only to be ridiculed. Luckily, Novak is not vain enough to not make his own protagonist the target of a joke on more than a few occasions, and that’s one of the film’s freshest wrinkles.

The murder mystery in the film is certainly engaging, but it isn’t the only important element. Novak’s savvy script upends our (and Ben’s) expectations of Lone Star State stereotypes when it could have very easily felt like low-hanging fruit handled with smug condescension. Abby’s little brother (an endearing Eli Bickel) goes by “El Stupido,” but it’s more of an affectionate nickname than anything. When Ben asks one of Abby’s sisters, Kansas City (Dove Cameron), how she takes her coffee, she replies dumbfounded: “in my mouth?” Sure, Abby’s family members seem like good-hearted but soft-headed folk who eat Frito Pie and love fast-food chain “Whataburger” because it’s always “right there,” but they’re not stupid. And they’re definitely not bad people.

Besides Novak’s likable lead performance mostly tracking as Ben undergoes a less-selfish, less-opportunistic arc, other supporting performances pop in this ensemble piece. J. Smith-Cameron is terrific, getting to play more than one note as Abby’s mother Sharon; her use of “bless your heart” is the equivalent of the middle finger, but she also gives such an emotionally true monologue about life being full of regrets upon regrets. Never given the chance to be funny, Boyd Holbrook is having a blast as Abby’s seemingly dopey but loyal brother Ty (and keep your ears out for a funny meta moment about looking like “a guy from a Liam Neeson movie” when, in fact, Holbrook was in a Liam Neeson movie). As Abby’s plainspoken grandmother, Louanne Stephens is a total spitfire and more endearing than her enthusiasm for firepower. Issa Rae, with her expert comic timing and infectious megawatt smile, even makes the most of Eloise, Ben’s podcast editor who becomes engrossed in the material Ben keeps finding and sending.

The biggest surprise of all, though, might be Ashton Kutcher. Yes, Ashton Kutcher is in here, too. Not to say Kutcher hasn’t been fine or even more than that before (his strong work in The Butterfly Effect still remains one of his best performances), but Novak gives the actor a real re-breakout role here. In character-actor mode, Kutcher manages to be unpredictable and endlessly watchable as Quentin Sellers, a charismatic and profoundly thoughtful record producer who can wax philosophical and has such a way with words that he couldn’t possibly be a murderer.

Novak does corral a lot into 107 minutes, being able to always track what makes his main character tick but also give refreshing humanity to would-be colorful caricatures. Only does Novak not seem completely certain on how to end this story, especially after such a satisfying moment between Ben and Abby’s mother on their way to the airport. Taken as a whole, however, Vengeance is offbeat and involving where it counts, zagging when you expect it to zig. If you think you know it’s going at every turn, well…bless your heart.