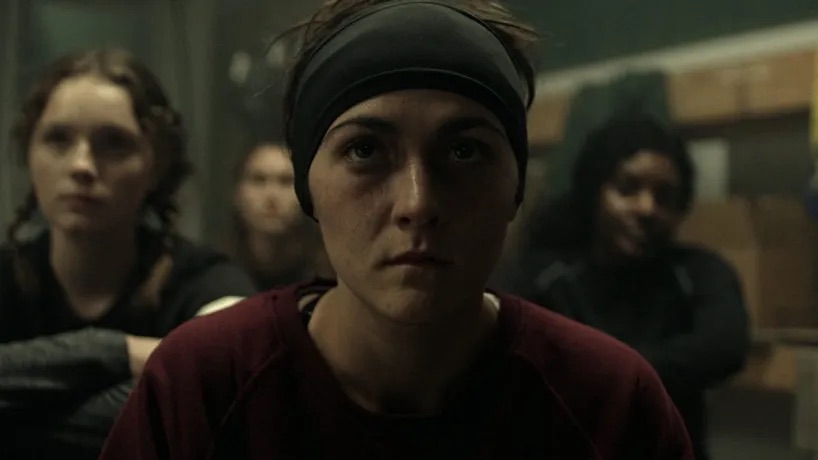 A basic description of The Novice would be “Whiplash, but with rowing instead of drumming.” It’s not a one-to-one comparison, but it’s a great starting point. In it, we follow the trials and tribulations of Alex Dall, an extremely obsessive young woman who, for reasons I won’t spoil, needs to be the absolute best at everything she does. But this doesn’t mean following her natural talents, but rather seeking things she has no aptitude for, and then conquering them through brute force will.

So while the main idea (an obsessive obsesses) is similar to Whiplash, the differences end with motivation. In The Novice, there is no abusive coach with a violent ego. In fact, the coach is an exceptionally nice guy. Played here by Jonathan Cherry (who was ripped into three sections by a wire fence in Final Destination 2), he’s the exact type of leader any unskilled hopeful could ask for. Supportive, kind, and willing to look past mistakes as long as the members of his team wish to learn from them. But Alex is not the type to really need a coach, at least not how she sees it.

Isabelle Fuhrman (Orphan) delivers a star-making turn as the titular novice rower. Sweat, blood, tears — she sheds it all and wears every strain, every disappointment, every piece of spiteful fire on her face. Her Alex is so compelling that we want to see her become the best of the best, but we don’t want to watch her destroys herself in the process. However, to categorize this as a typical narrative about “the price of success” would be to miss what makes the film special. As we learn more about who Alex is and, more importantly, where she’s from, her motivations become that much clearer, and that much more ethically complicated.

Written and directed by Lauren Hadaway (who I now see was sound editor on Whiplash), the construction of The Novice is a clinic on how to make heightened visuals feel organic, while using them to really rattle the viewer. This is one of the most tightly edited movies I’ve ever seen, and every shot is perfectly composed. In fact, one could rip the soundtrack out entirely and still follow it. The craft is impeccable.

I entered The Novice knowing very little about rowing — having very little interest in rowing. But afterwards I found myself googling the physics of it while courting a desire to work up a sweat in any way I could. Unlike Alex Dall, however, I plan to sleep when I’m done.