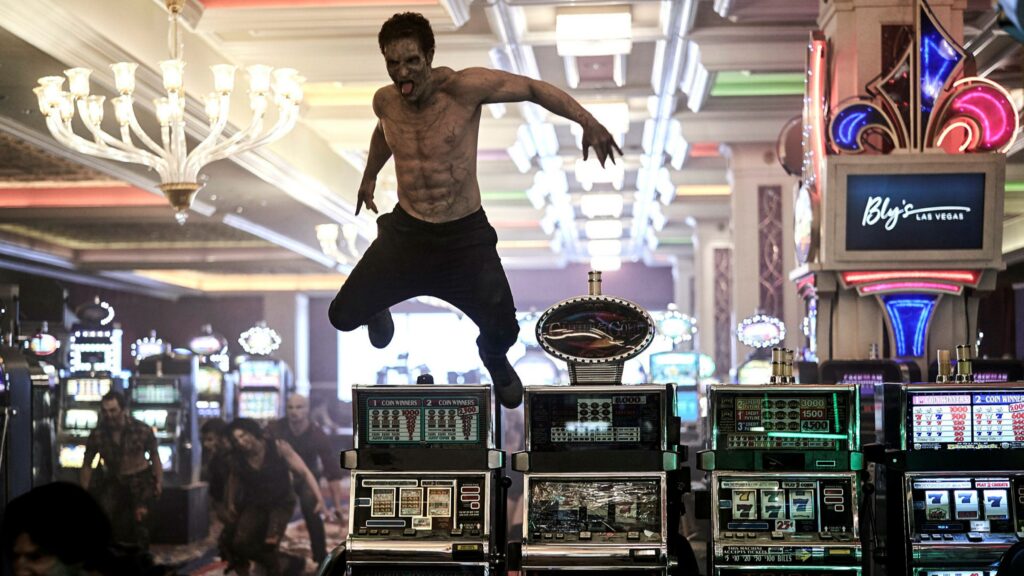 Zack Snyder is a workhorse. The dude never seems to stop making movies, and always seems to be doing so with a smile. Earlier this year he released the controversial “Snyder Cut” of Justice League, which clocked in just over four hours, and now he’s back again with an original property that clocks in at nearly two-and-a-half hours. It’s an impossible workload if you ask me, and it’s beyond insane that either film functions at all, not to mention that both are quite good (his cut of Justice League, in my humble opinion, is one of the best superhero movies ever made). Snyder’s films aren’t for everybody, and for some reason a lot of people carry an oddly personal hatred toward him and his movies, but no one can dispute his work ethic or his technical proficiency. Whether you dig his style or not, the man is a master craftsman.

Army of the Dead hearkens back to Snyder’s feature debut: his terrific remake of Dawn of the Dead.  With the original largely regarded as the greatest zombie film of all time, he again managed to pull off the impossible by creating a respectful remake that also succeeds on its own terms. Much like Dawn, Army is not filled with the speed ramping and painterly visual flourishes that have come to be Snyder’s trademark through the years. While it is indeed a very pretty film, it’s much more about sequence than moment, which serves the material well. As a run-and-gun picture, there’s hardly time to stop and smell the roses. Nonetheless, this is still very much a Zack Snyder film, and a good one at that. Violent, action-packed, funny, and surprisingly moving, it delivers on everything it should. Watching it I really understood why Snyder was so successful at adapting both Dawn of the Dead and Watchmen (itself yet another impossible adaptation): the dude has a command of melodrama.

In the opening sequence of Army we meet a handful of military guys transporting a mysterious package via convoy. We also meet a pair of newlyweds driving in the opposite direction and engaging in the dangerous act of…I don’t wanna say it. It rhymes with “road bread.” This confluence of events results in a gigantically explosive accident which releases the mystery cargo. It’s a zombie, and a powerful one at that. Before long the entire convoy is dead and the zombie is on his way to the nearest population center. You guessed it: Vegas, baby!

This brings us to the present day where Las Vegas is now a town overrun entirely by zombies. After a huge battle between the living and the dead, Sin City is now walled off and quarantined, and in just a few days, on July 4th no less, a nuke is scheduled to be dropped on the strip, ending the infestation of ghouls for good. Currently, the military is working on relocating the denizens (prisoners?) of a nearby Vegas refugee camp in anticipation of the blast, while those inside are seeking to obtain their freedom at large. Meanwhile, the heroes of the battle to free Vegas are mostly living unimportant humdrum lives.

A rich businessman (Hiroyuki Sanada) sees opportunity in the upcoming elimination of Vegas. He’s got a safe full of cash sitting in one of his properties within city limits, and since he’s already collected insurance on it, it’s now totally tax-free. His plan is to pay off a bunch of freelance thieves to break into the city and retrieve the cash in exchange for a healthy cut. And who better to lead the squad than Scott Ward (Dave Bautista), one of the few who made it out of Vegas intact. The team consists of Scott, his old friend Maria (Ana de la Reguera), a handful of highly weaponized toughs (Omari Hardwick, Samantha Win, Raúl Castillo), a locksmith (Matthias Schweighöfer), a pilot (Tig Notaro), and a handful of others.

Many of this too-large roster of characters are there just for the money, but a few have personal reasons to embark on the mission. It’s a lot of characters and material, sometimes too much, and since we all know the real reason behind it all (you simply can’t have an effective zombie movie without a pile of victims to gruesomely dispatch) it feels like a fair amount of wheel-spinning. As such, the film takes a little while to find its energy. The entirety of the first act is spent gathering the team and establishing the stakes of the mission. This is a necessity, but the way it’s handled pays off only partially. It’s an onslaught of names, faces, and information, and while the emotional beats the film eventually aims to hit with its core characters emerge well-established, the rest are diluted by sheer volume. It’s never boring, per se, but since we know that a large portion of these folks are destined to become zombie food, it’s easy to mentally dip out (and you wouldn’t miss much if you did).

Once the mission begins and the meat of the story gets started, however, the pace is downright explosive. It’s pretty much non-stop action and excitement until the maniacal finale. Plenty of jokes punctuate the proceedings, adding to the fun of it all, but it’s the central emotional beat that stuck with me. Dave Bautista’s Scott is currently experiencing a rough patch with his daughter Kate (Ella Purnell), whose mother he had to kill when she became infected with the zombie virus. Both Bautista and Purnell navigate these familial stressors with a level of grace uncommon to a large-scale action flick, and one gets the sense that Snyder, who co-wrote the film, has a personal stake in this portion of the tale. It was a family tragedy involving his daughter that pulled him from originally completing Justice League, and one gets the sense he’s communicating some of his thoughts on the situation here. It’s very mature, and when viewed through this lens, extremely moving. As far as athletes-turned-movie stars go, I think Dave Bautista might be the best actor of the bunch. He has such a unique look, but is capable of a very broad range of emotional bandwidth. Great sense of timing too. He carries the movie like a goddamn superstar, and it’s just awesome to see.

And is there anything more endearing than him putting on glasses? I don’t think so.

Visually, Army of the Dead is a treat. The “post-apocalyptic” Vegas is the right level of colorful and decrepit, and the micro-locations exist on a broad expanse of color palettes and lighting formats. Snyder popped his cinematographer cherry with this movie and does a bang-up job of it. Early in the film there are some odd focal choices (lots of foreground heads in front of non-descript, highly blurred backgrounds) that didn’t work for me at all, but this style choice dissolves as the story presses on. The reset imagery here comes in the zombie design. Taking a page from Matheson’s I am Legend, the zombies inside Vegas have a hierarchy amongst their numbers. There’s a king, a queen, and multiple levels of ghouls below them, each with different strengths, weaknesses, and abilities. Their social caste system features prominently into the larger plot as well, and their appearances are all true to the types of people you would meet on a given day in Vegas. There’s a ton of imagination here, and although it’s applied clunkily at times, it’s just so so much fun.

Naturally there are a bunch of great needledrops (how the hell did The Cranberries’ Zombie never appear in a zombie movie before now?!), and one line in particular was so brilliantly funny that I choked on my dinner. Kudos to Tig Notaro, who gets most of the film’s other laughs, and gets them despite having been DIGITALLY ADDED TO THE FILM AFTER THE FACT. For real. When Chris D’Elia got in trouble for something or other (I can’t keep up), he was struck from this movie and replaced by Notaro at the last minute. It’s a seamless replacement. You’d never know she wasn’t the original performer, and frankly, she’s so good in it that I can’t picture D’Elia in the role. Movie magic, baby!

It’s no secret that I love the films of Zack Snyder and respect the hell out of his work ethic. I choose to remain uninvolved with the whole pro/anti-Snyder Cut malarkey because as I see it, it’s two small, toxic, very-online elements of a much larger fandom that are not representative of real people in the real world, getting at one another for reasons that are not worthy of any of our time. The fact of the matter is that Snyder himself seems to love making movies, and takes a very thoughtful, technologically crafty approach to doing so. He’s always trying to push himself and his work to the next level, which is more than many filmmakers can say. With Army of the Dead he seems to be having a ton of fun, and it’s a wonderful thing to be swept away into this amusement park ride of a movie he’s created for our entertainment. Army of the Dead, more so than anything else, is just that: a great piece of entertainment.