The Barrymore Awards, Philadelphia’s bastard stepchild of the Oliviers or Tonys, took something of a hiatus for the 2012/13 season, as the downfall of the Theatre Alliance meant no annual awards were given for the season. (Phindie made some attempt to fill the gap with its a selection based on a poll of local theater critics). Nonetheless, the Alliance’s successor organization, Theatre Philadelphia, is having an awards ceremony and “Theatre Prom” tonight in Old City. (Awards will be presented for Lifetime Achievement, Emerging Artist, and in non-production specific categories.) 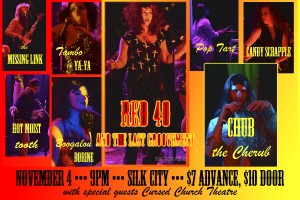 Most theater artists would balk at producing a show on the same night as the annual theater establishment event, but the 2013 graduates of the Pig Iron School for Advanced Performance Training are not everyday theater artists. Red 40 and the Last Groovement is a 10-piece clown-funk-R&B experience created by talented Pig Iron alum, including Barrymore-acclaimed Alex Bechtel and Jess Conda, as well as Martha Stuckey, Ben Grinberg, and others. Described as “part dance party, part funk concert, part idiot-clown theatrics, and all heart”, Red 40 sounds like the perfect antidote to a self-congratulatory theater fete.

Includes special guests from Cursed Church Theater, who will be playing excerpts from their upcoming B-52’s musical. TONIGHT ONLY at Silk City! November 4, 2013, facebook.com/events/541699599242483.