Regina King’s directorial debut puts to shame so many projects that apply intense prosthetic makeup to recreate the images of real people (I’m looking at you, Bombshell) [*or so it seemed to this reviewer, see note below], instead showing that in order to accurately capture the spirit of a real person, the best way to do it is through performance. As evidenced by one of the finest casts of recent memory, this story of a fictional meeting between four very real, very important people bristles with the intensity required by such challenging material, and showcases a wealth of talents both in front of and behind the camera. Regina King has now earned the incredulous audience declaration of “is there nothing she can’t do?!?!?”

February 25, 1964 was a huge night in the world of sports. Cassius Clay, mere hours before announcing to the world his membership in the Nation of Islam and his requisite name change to Muhammad Ali, took the heavyweight championship from Sonny Liston in what was largely considered an upset (Clay was a 7-1 underdog). It was a globally recognized event, but due to segregation laws, Clay was not permitted to celebrate alongside the droves of folks convening on Miami Beach. Instead, he and a few of his friends, Jim Brown, Sam Cooke, and Malcolm X have retired to the Hampton House hotel in the largely black Overtown neighborhood. Cooke (Leslie Odom Jr.) wants to party. Jim Brown (Aldis Hodge) is thinking maybe they should find some ladies to hang with. Clay (Eli Goree), is too charged up to call it a night, but is stuck between wanting to celebrate, and preparing for his upcoming announcement. Malcom X (Kingsley Ben-Adir) is the most on edge of the foursome, and naturally so, given his high profile in the civil rights movement and the dangers such an image can bring.

Adapted by Kemp Powers from his play of the same name, a lot of what occurs on this evening leans on the fact that we in the audience know what fate befalls these gentlemen. This evening occurs less than a year out from the untimely deaths of both Cooke and Malcolm X, and any culturally literate person knows the career path of Ali (who remains the greatest – sorry, Mayweather). Jim Brown has less of a notorious story (despite having been an outspoken advocate for people of color and their place in American society for as long as he’s been active in his career), but this is by design. The inclusion of each of these men has a purpose, and it’s all in service of a supremely compelling theme. 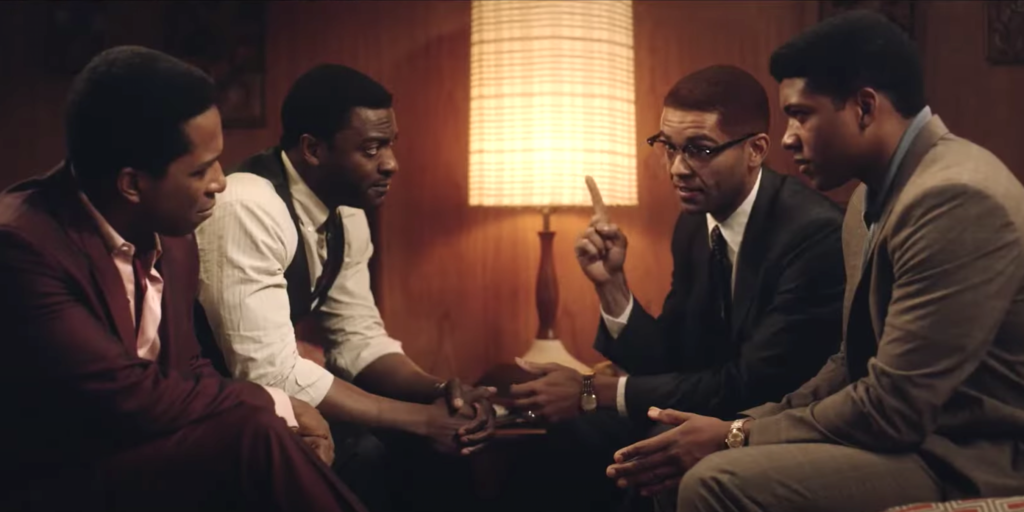 You see, all four of these notables found success and/or notoriety at a time when there was nothing scarier to white America than educated people of color, and no metric through which a bigoted society could better measure/guard against change than by that of black success. Yet amidst these four similarly positioned men, we find four very different viewpoints regarding racial liberation. Presently, at a time when even the most well-intentioned activist mistakenly (and in the world of politics, often tragically) regards racial populations as monoliths, reducing a sea of personalities and opinions to one single list of ideas, usually based in the assumptions of an outsider to the cause, it’s good to be reminded that no stereotype, even one applied altruistically, can give a complete picture of any individual. One Night in Miami depicts, in no uncertain terms, both the difficulty and the beauty of allowing conflicting ideas to be investigated through passionate conversation and an exploration of the merits and demerits of each.

Our main cast is stellar across the board, each capturing the essence and image of their real-life counterparts in a way that feels like magic. All four leads look just enough like their role that any physical differences can be paved over by performance, and even if they looked nothing like the men they were playing, it wouldn’t matter. They’re that good. Mark my words, one day Leslie Odom Jr. is going to be regarded as one of the greats. Somehow, amidst a foursome of masterful performances, he rises to the top. Sam Cooke’s story is a tragic one, and even though we’re only seeing one night of his life here, Odom wears this role with the full weight of Cooke’s future on his face. With Cooke not being a psychic or anything, there’s no way he could have known that his time on this mortal coil was to be short, but the knowing air of doom makes sense to have manifested for a figure like Cooke (and for all of these guys, really) given his role in a world designed to have barriers in place for people of color looking to rise above a certain station.

Regina King shows off considerable skill as a director, most notably through the performances she no doubt helped to coax from the cast and crew. While it would be an assumption to call her an “actor’s director,” I don’t think it’s too wild of one to make. The fact of the matter is that King knows how to give a killer performance, so it stands to reason she’d be helpful in this regard even behind the camera. As for her direction from a filmcraft perspective, there is a bit of blandness that is typical for first-time directors, as well as for films adapted from plays, but I must commend her reticence to add too much flair where it wouldn’t belong. Don’t get me wrong, this is not just a “filmed play,” but it does exist somewhere between that designation and “movie that fully justifies its own existence.” This is a good place to be, and King is smart to focus on shot composition, scene structure, and giving a space for her actors to do what they do best.

Small notes of directorial inexperience are hardly even worth noting, as it’s clear King’s choices, successful or not, are indeed choices, which puts her light years ahead of so many actors that make the jump to directing. This is just the beginning of what is sure to be an exciting directing career, and it’s proof positive that whatever King does next is going to be just as thoughtful, entertaining, and unique.

*note on prosthetics:
As it turns out, not only was prosthetic makeup used, but it was used wonderfully. As you can see in the text of my original review, I was fooled by it entirely, and only alerted by a comment from Scott Wheeler, head of the makeup department for the film (see below). Credit to Scott and the makeup department for bringing the movie to life with their excellent work. It’s absolutely seamless.