I don’t believe the content of a movie has ever lived up to its title more accurately than Psycho Goreman. The movie itself beyond psychotic, and it’s filled to literal bursting with gore, man. Existing somewhere between Power Rangers, the early work of Peter Jackson, Gwar, and the apocalyptic things Ron Burgundy says while emotional, Psycho Goreman is like a lot of things you’ve seen before, but is also a total original. If that description pricks up your ears even a little, I assure you that you are going to love this movie. And if you aren’t quite sold on that (what hell is wrong with you?), please note that the closing credits feature an original rap song the lyrically covers the plot of the movie.

Remember when that was a thing? Remember when the Ninja Turtles got both a Vanilla Ice and MC Hammer song, or when Freddy Krueger’s story was rhymed by The Fat Boys? Well, it’s a thing once again!!

Now I have to figure out how to spell out the basic plot for you. Here goes:

Mimi and Luke are two precocious children who, during an intense game of Crazy Ball, accidentally awaken an ancient being whose only function is to bring death and destruction upon anything and everything which may get in his way. He has super strength, laser eyes, and a violent imagination that has him dispatching insolents in extremely creative and horrifying ways. The only problem is that his powers come from a magical gem, and whoever holds this gem has complete control over his destructive will. Since Mimi technically won the round of Crazy Ball which lead to the release of Psycho Goreman (“PG” for short) from his underground prison, the gem is hers. And since Mimi was already the type to do whatever she wants whenever she wants to do it, regardless of the whims of others, the additional power granted to her by the gem is immediately and thoroughly intoxicating. This means that little Mimi can pretty much do anything she can dream up, and Psycho Goreman, who only wants to regain his freedom to bathe in the blood of innocent people, is stuck doing her bidding, and doing so in costumes of her choosing. 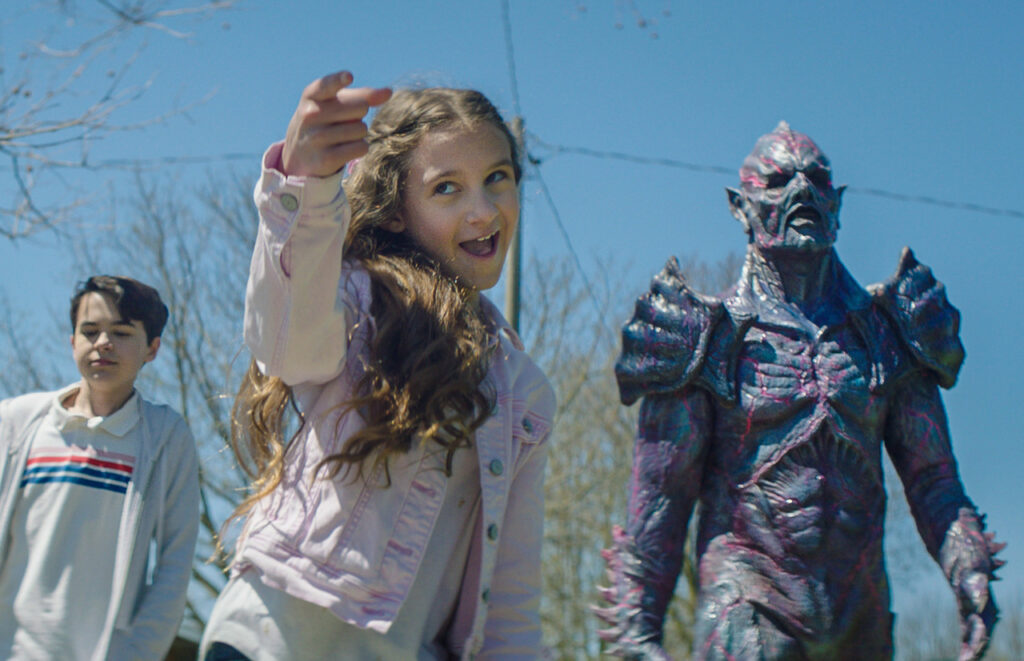 Writer/director Steven Kostanski applies the same practical goops and gore that made his previous film, The Void, so effective and unsettling. But here the splattery body horror is mostly applied for laughs. That said, there are more than a few goofy moments that are Hellraiser levels of fucked up. Nay — Hellraiser II levels of fucked up. One character is so distorted by PG’s magic that he spends the film regularly begging to die while failing to take his own life. Trust me when I say that it’s never not funny. But also trust me when I say that a lot of the laughs were very much a coping mechanism for the horror displayed on screen. It helps that the world in which this story occurs is somewhat adjacent to reality. When you meet Mimi and Luke’s parents, whose relationship can only be described of as “dysfunctional to the point of absolute absurdity,” it becomes clear exactly the spirit with which all of this should be taken in. It also makes the aggressive attitude of Mimi (played here with unending, demanding spit and vinegar by Nita-Josee Hanna) somewhat understandable in a vacuum, and exponentially hilarious with every plot development. I’d voraciously consume a TV show about Mimi dealing with monsters of the week.

Psycho Goreman himself is quite the creation. He’s the visual embodiment of a villainous action figure, forged from the same foam rubber as your favorite kaiju, and he seems incapable of saying a word that isn’t in service of some biblically-phrased threats of epic violence. One would not normally be tempted to call him a softie, but in comparison to Mimi, the film finds a way to make him a functionally empathetic being. Perhaps this is due to his determination in destroying the universe. In a lot of ways, his mission is impersonal, but we should all be so proactive in our own interests, and nobody likes seeing greatness (even in the realm of pure evil) squelched by the selfishness of a third party (in this case, a power-drunk adolescent).

These odd characterizations result in a film that is as crass and goofy as it is touching. Gorehounds will love the imaginative design and the creative ways of applying a gigantic mythology to something so silly, while genre squares will, at the very least, get a few chuckles out of how bizarre the whole thing is. It’s the kind of movie that I want to show to my friends in a post-quarantine nachos-and-beer party, while also being the type of film I’d happily show my mom, who would be confused, but would ultimately laugh, or my teenaged niece, who would be absolutely enchanted by the meme-like humor scattered (splattered?) throughout.

Watching Psycho Goreman, my distaste for the concept of “there’s nothing new anymore” has been pushed into overdrive. There’s plenty of new stuff out there. You just have to know where to look. Now do my dark bidding and spend a cursed night with our new savior, Psycho Goreman (once again, “PG” for short).