Promising Young Woman is a fearless, angry movie, the likes of which we rarely see anymore. Since we live in a cultural marketplace where we demand every film be sanitized to the point of broad appeal but then lament that everything is so similar and safe, it’s goddamn refreshing to see something so filled with spit and vitriol. A candy-colored tale of vengeance, trauma, and a culture that is only half-committed to actual progress, with an utterly terrifying performance at its center, the feature directorial debut of Emerald Fennell (who also wrote) is an unmissable treat — even if I can’t promise you’ll like it.

Here’s the thing: it does not give a single fuck whether you like it or not, and chances are, if you’re upset by it, well, maybe you should be. While this is indeed a feminist text with some very sharp satirical barbs, it’s one that ultimately plays pretty fair with what has proven to be hot button material in recent times: consent, assault, and the short-term memory we all apply to such things. Like Sorry To Bother You before it, Promising Young Woman is a high-concept satire that simply must be seen to be believed, driving home heavy thematic material in a supremely stylish and engaging way, with a pitch-black sense of humor to boot. This, to put it quite simply, is how it’s done. 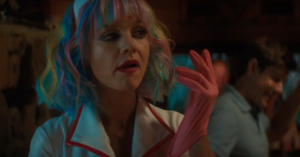 Carey Mulligan plays Cassandra, a young med school dropout who passes her days working at a coffee shop, and her nights pretending to be inebriated at nightclubs so she can test the ethics of any man that tries to bring her home. The details of these encounters, and her methodology of said tests are best left discovered by the viewer, but I will say that on a scene by scene basis, these encounters demonstrate incredible management of tone. Balancing humor, urgent social commentary, and deeply felt moments of pure cringe on the behalf of the actions of these men, it gets established pretty quickly that this movie is interested in making our tumblies grumbly. While the film takes its time getting to the motivation of Cassandra’s actions, it leans on the fact that all of us, me and you included, can very easily make an accurate assumption.

Things start to change for Cassandra when she begins to fall in love with an exciting new man (Bo Burnham). He’s a guy who could potentially re-jigger her current attitude towards men and dating. The thing is, she’s essentially living a double life at this point, one which could get in the way of her burgeoning romance. I’m going to have to leave the plot description here, because the less you know, the better. But I assure you, it hits hard.

While Mulligan’s performance is demented in the best of ways, and her Cassandra is easy to root for, even if it’s clear she’s unwell, I found myself wanting to know more about her. For the function of the movie, it makes sense that she self-defines with her trauma, but it also leaves her feeling too often like a plot device rather than a person. Part of this is surely intended, as someone in her situation would naturally put up a defensive shield, but some assertion of personhood beyond this would have gone a long way, especially since Mulligan is keyed up to eleven and taking some really big performance swings that land wonderfully. My thought is that the movie didn’t want to lean too hard into the idea that Cassandra, despite being morally correct, is quite dangerous herself. It’s as if, in anticipation of the think-pieces that will surely manifest in the coming weeks, the film doesn’t want to sell out its (anti)hero as a sort of tainted messenger. It’s not a huge complaint, but the movie, being as fearless as it is, steps back from the edge in this regard, and I’d have loved to see it go all the way.

Then again, maybe it’s not really about her so much as it’s about the world that created her. I’ll certainly need another handful of viewings to really sort it out, but that’s not even a remotely tall order, as I cannot wait to watch this one again.

The soundtrack, filled with Britney Spears, Paris Hilton, and a bunch of stuff that I’m not nearly cool enough to recognize (but are ripped from the teenage years of most people my age) gives the film a unique forward propulsion. The needle drops act sometimes as punchlines, sometimes as tonal guideposts, and always as an enhancement to what’s on-screen. So often a song will appear in a film’s soundtrack and despite being a sick tune, it’ll pull the viewer out. Here they only serve to draw us in, which is essential for a movie that wants to invite the viewer in close before fucking with their head…and when you know more about the plot, this is wiiiiiildly appropriate in helping the audience to understand the experience of the main character (and so many of her real-world analogs). One particular audio treat is lifted right from the audio of Night of the Hunter, a movie that Promising Young Woman makes plainly clear was an influence, and one that is honored quite nicely here.

Promising Young Woman is a stylish, angry feminist thriller/dark comedy with attitude to burn. The kind of fearless, emotional filmmaking that sears its satirical targets at a high temperature while always managing to stay true to its flavor as entertainment. I’ll be first in line for anything Emerald Fennell makes henceforth.