Directed by Michael Blakemore, who directed the play in London, New York, and Paris, the production boasts multiple layers of producers. 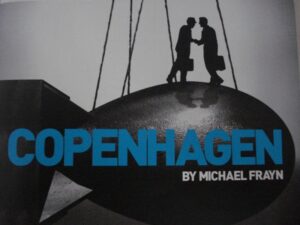 Mariette Hartley appears as Margrethe Bohr in a dumpy 1941 suit and sensible shoes. I had previously associated her with an old and very successful TV commercial. The quality of her work here is excellent. She speaks with a vaguely foreign accent and has stage presence to burn.  The two men, Niels Bohr (Len Cariou) and Werner Heisenberg (Hank Stratton), both accomplished actors who approach their roles with fine temperament, are just not credible as German or Danish physicists, or any kind of physicists. This presents a stumbling block for me, no matter how good they are– and they are good.

The play presents the different imagined recollections of Bohr, Margrethe, and Heisenberg as they search for their lost relationship. Along the way discussions about the uncertainty principle and complementarity and what happened in the past at their critical meeting is constantly intercut with talk of physical action: skiing, walks, hikes. Haunting personal tragedy is woven into the fabric, as is commentary on their own behaviors as they perform them, re-playing critical moments, differently each time, postulating alternatives. Sometimes it’s funny. Heisenberg just doesn’t ‘get it’ about life under the German occupation, and this provides a real source of amusement, strange as it sounds.

Heisenberg presents himself as a pacifist, which turns as Margrethe challenges this point of view. Why was the German atomic bomb project unsuccessful? Was it because the numbers were accidentally calculated incorrectly? Or did Heisenberg deliberately sit on it? Did any of the genius physicists really understand what they were doing, working toward a terminally destructive weapon? Frayn’s work is lucid, complex, teasing.

The very effective set has been much remarked about in other reviews, and I will not describe it again here, but a real star of the show is the lighting. Subtly shifting lights underline the characters’ words and movements. The lighting changes as the emphasis moves from the Bohrs to Heisenberg and back. In the second act, the light remains bright and unchanging for a long time, setting you up for the special effects, and some very carefully focused units trace a precise path of light to the tip of a triangle on the stage floor. Lighting designers Mark Henderson and Michael Lincoln deserve kudos.

I couldn’t dream of handling the math, but years ago I read popular quantum physics books and loved them: Gribbin’s In Search of Schrodinger’s Cat and In Search of the Big Bang. And of course Hawking’s best seller, and Einstein’s correspondence with Planck, Schrodinger, and Lorentz. Also Feynman’s books for laymen, and more. For this reviewer, a Pop-Quantum Physics junkie from way back, it is a pleasure just to hear the names spoken: Irwin Schrodinger, Wolfgang Pauli, Fermi, Born, Bohr, Heisenberg.

I believe that much of this play flies over people’s heads, but that doesn’t ruin its effect. Far from it.  I suspect that among the reasons Copenhagen has been a success is that it makes audience members think -for two hours- that they are smarter than they actually are. I sit safely among my fellow audience members and think, “Yeah, Heisenberg, do the math.”