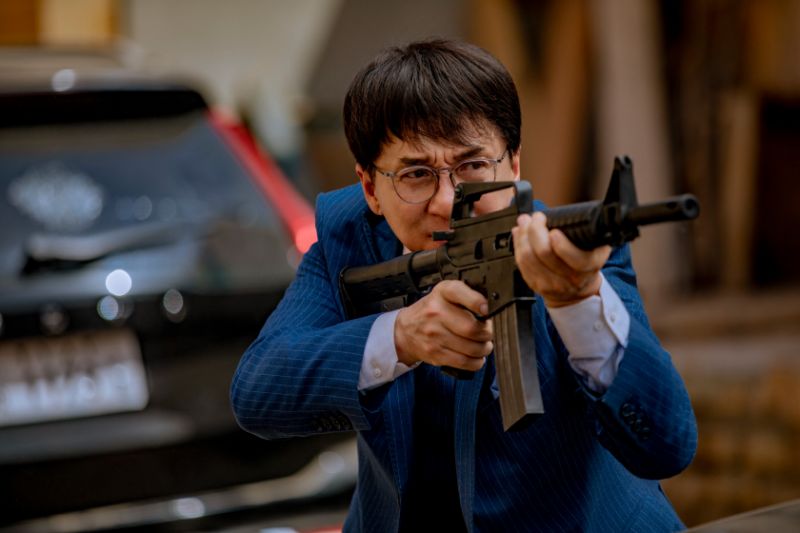 When I was a child I was a bit of a connoisseur of Jackie Chan cinema. A “Chan Fan” if you will. And why wouldn’t I be? The man mixed comedy and karate better than anyone on the planet, and short of dinosaurs, there was nothing that young me cared about more than comedy and karate. The first and probably still my favorite of his early American releases was Rumble in the Bronx, one of many collaborations Chan had with director Stanley Tong. The two also worked together on Supercop and First Strike, two of my all-time favorites (yes nerds, I know these are teeeeechnically considered Police Story 3&4). So when I saw that Vanguard, a Chinese production that makes an attempt at aping the Fast and Furious brand of action, was a new collaboration between Tong and Chan, I had to give it a shot.

Vanguard is, well, something. It’s big and loud and colorful and action packed…but it’s also cheap looking, nonsensical, and could loosely be described as propaganda (to be fair, it’s the same as the American essentialism we see in our movies, just of a slightly different flavor). It’s also not really a Jackie Chan movie as it were, but rather a potential franchise launcher that uses the inclusion of Chan as a profile boost. While it’s fair to say that the beloved actor gives it his all (and sings a song in the closing credits to boot), he’s far from the star of the show.

Who is the star? Well, I don’t really know. Vanguard is the name of a group of super agents employed to stop bad guys from doing bad things, typically by doing karate fights. Jackie Chan plays the head of this agency, and the proposed stars are his underlings. The thing is, I don’t really know who any of these characters are outside of being young, flexible, and camera friendly. No matter, character work is not really what I’m here for. The gist of the plot is this: a group of bad guys want to do bad things, so they kidnap the daughter of a businessman in order to get him to join in on the bad things or something. Vanguard steps in to rescue the girl and protect the businessman in the process. From here the plot expands to include a powerful magnate from Dubai, a handful of virtuous soldiers, hoverboards, boat-jeeps, and even a group of CGI-rendered lions of middling quality (to go along with the CGI car chases of low quality).

So our crew of interchangeable agents moves from place to place, hopping from one green-screened location to another, all the while fighting baddies with fisticuffs and firearms. Oh, and there’s a scene with some troubling application of brownface that, if the rest of the movie weren’t so chock full of odd cultural elements, would’ve been pretty shocking. But as it is, my reaction was more of a “of course this is happening right now.”

The action is pretty solid if you can get past the effects work and some occasionally choppy shooting/editing. The choreography is tight, and short of a few moments, mostly shot with clarity. Even Chan, who is now in his sixties, can move pretty well, and is given a chance to show us he can still exchange punches and kicks with the best of them. He even nabs a few laughs with his classic facial mugging. It’s fun to see.

The time I spent with Vanguard was not wasted time, but I’d be lying if I said it were a good movie. It was a fun way to pass a Saturday morning, due both to the inherent joy I get from martial arts cinema as well as the fascinating weirdness that comes from a product so gaudy and foreign, but as far as Jackie Chan flicks go (and this really is only a Chan flick by the most minimal standards), it’s on the lower end of things.

The real question that remains, however, is this: If Vanguard manages to successfully become a franchise, will I come back for more?

If I get to write about it, yes.