It’s hard to believe that it’s been 14 years since the release of the first Borat film, in which Prankster Laureate, Sacha Baron Cohen used his oddball Kazakhstani reporter character to comment on an America newly embroiled in a post-9/11 feeling of Nationalism, itself coming with a hearty side of racism toward the Middle East. Watching people be dismissive of the confused, offensively forward character, while simultaneously wanting to appear helpful and progressive is a joke that never seemed to get old, and Cohen, master satirist that he is, was able to put forward a scathing comedic product that manages to have partisan targets without feeling like partisan material. I’ll put it simply: My dad, as aggressively right-wing as they come, found the first Borat flick to be hilarious (although, true to character, he “could’ve done with a bit less nudity”).

After Borat came Bruno, and after Bruno, America agreed that Cohen was too recognizable to be as effective as he once was — it’s rather difficult to fool someone who knows they are being fooled. So to combat this, Cohen brought us some new characters via This Is America, all of whom are hilarious, but none of whom are as instantly iconic as Borat Sagdiyev.

Naturally, as we approach an election that leaves our country more divided than I’ve ever seen it, Cohen is dipping back into his old bag of tricks, promising to bring Borat back to the American stage for a new adventure – an adventure sure to be filled with stuffy people tricked into acting like buffoons. Releasing another Borat flick is a gamble, what with “my wiiife” and “very niiice” being as played out in the culture as “get in mah belly,” while the world is actively relitigating what kind of comedy is acceptable (almost entirely on party lines, without any adherence to logic or actual care toward others). Going in, there’s a very big chance that a straight to streaming sequel to a beloved, very much of its time classic, would be a total dud. 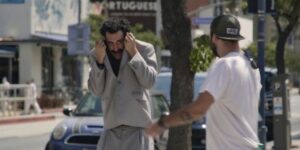 I am pleased to report that this is very much not the case. Borat Subsequent Moviefilm is hilarious to the point of incapacitation. My laughs sounded more like screams since my jaw was planted firmly on the floor for the entire runtime. It feels just as fresh, funny, and satirically sharp as its predecessor, and it could not have come at a better time. What I mean to say is that we need more laughter in this world, and we need more of it to be at the expense of the very powerful people who have forgotten what it’s like to be a human being. Borat shall lead the charge!

The framing device is as bizarre as one could expect. Borat, serving at a labor camp as punishment for disgracing Kazakhstan with his previous “moviefilm” has been hand-selected for a mission: Deliver Kazakhstan’s biggest TV star (a monkey) to “Vice Premier Mikhail Pence” as a gift to help raise the profile of the Kazakhs on the global stage. Should be relatively simple, right? Well unfortunately for Borat, his “non-male son” Tutar (who he has abandoned on account of her gender) has stowed away with the monkey, eaten it during transit, and is now inserting herself into her father’s life. This causes trouble for Borat, who is told by his government that he will be drawn and quartered for losing the monkey. But Borat, resourceful as he is, has a new plan: In the absence of the monkey, he will instead gift Tutar to Pence, who is a “pussy hound” in Borat’s eyes, due to his assertion that he not be left alone with any woman who isn’t his wife. What this means is that Tutar will need a makeover and some behavioral training, both of which Borat is all too eager to provide, even if just as a way to distance himself from his daughter, who I remind you, is female. Tutar loves this idea. She sees it as an opportunity to become “the next Melania.”

You pretty much know what to expect here. A mix of hilarious scripted segments and sneaky “on the streets” pranks are stitched together to make a film, and much like its predecessor, the final product manages to be the best of both worlds. The “narrative” is compelling and unexpectedly heartwarming, while the pranks are hilarious, shocking, and if they weren’t pointed at some truly despicable targets, borderline cruel. With Borat being such a recognizable face here in the real world, Cohen and the gang have written this limitation into the script. Borat wears disguises, all the while maintaining the same quirks, and manages to get away with figurative murder as a result. In addition, Borat plays second fiddle to Tutar, whose cultural anonymity gives her the freedom to go HARD in any situation.

The actress behind the comedic powerhouse that is Tutar Sagdiyev gives a career-making performance. Her name is Maria Bakalova, and at this juncture, I have little information about her. The cast listings conflict one another, and every piece of press material I can find mostly leaves her out. This makes sense, given the nature of the project — if I didn’t know it were all a big goof, I’d really think she was the repressed child of a woman-hating reporter from a cartoonishly backwards culture who desperately wants to prove her worth by being sold to the Vice President as a sex slave. There is no amount of words I could put forth to effectively clarify how brilliant her performance is, I only wish I knew more about her so I could scream more than just her name from the mountaintops.

There is one scene that could be considered “the big scene,” and yes, it’s as damning and hilarious as you’ve likely read. Critics will say that it’s a case of entrapment, while fans will say that the target has no business not shutting down the situation immediately. Both are valid interpretations, but I couldn’t give a shit either way. The fact of the matter is that the big scene is funny as hell, and the target is someone who needs to be knocked down a peg.

What is it about politics that attracts creeps? Dunno, but it also attracts people so damn clueless that they can be exposed by Borat. You love to see it.

You already know whether or not you’re going to see this movie, and if you are, you won’t be disappointed. My main fear going into this was that it would be a pale sequel, existing just to bank on an old cash cow, but we can relax, as this couldn’t be further from the truth. Once again, Cohen has found a way to make fun of Americans while keeping us in on the joke. He has pointed his barbs directly at the current presidential administration, but I bet even the most ardent Trump supporter would find themselves laughing at the film. Cohen has masterfully interwoven hidden camera pranks, scathing satire, and gleeful absurdism into a deeply satisfying and hilarious movie that made me laugh so hard it scared my cat. Very nice.