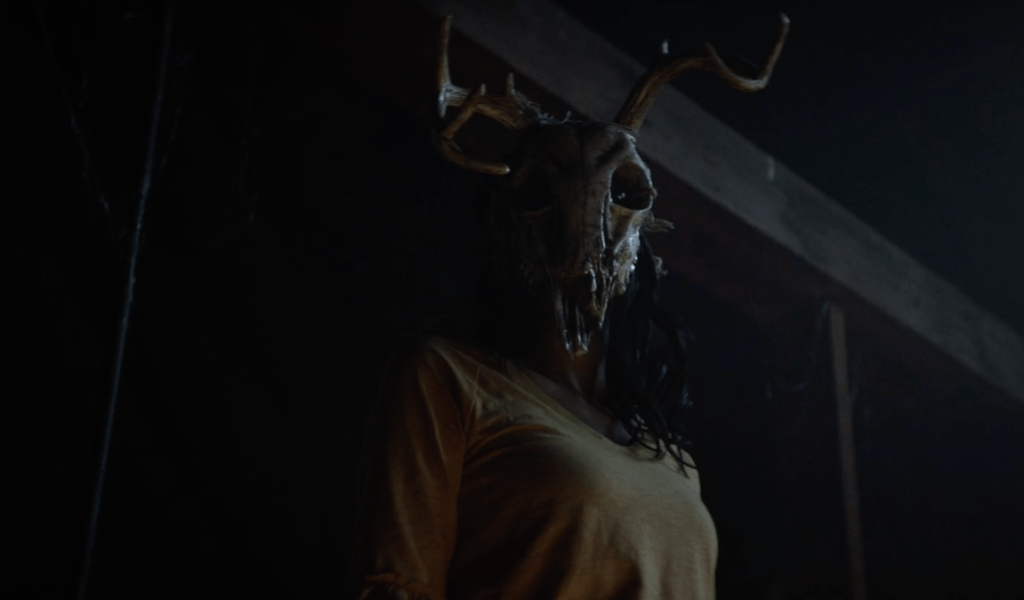 “This movie just got good,” remarks our hero as he watches his potentially haunted neighbors in a bit of Rear Window-inspired spying as they make love in front of an uncovered window. This cheeky comment occurs at just about the halfway point of The Wretched, and had he waited another 20 minutes or so of runtime to say it, he’d have been spot on.

Not that this witchy, spooky film is a dud or anything. In fact, there’s a lot to love about it. But since it works so hard to invoke so many influences, the film dilutes itself from being as memorable or as effective as it so clearly wants to be. That said, when the third act hits, kicking off with a cleverly conceived surprise, The Wretched asserts its own identity and transcends that pastiche feeling it has up until that point. Overall, this is a solid way to spend 90 minutes. I imagine that its intended audience, the teenage horror crowd, will love it, partially because the plot is clearly skewed toward the social interests of that demographic, and partially because the many influences on the film’s sleeve may not feel so well-worn to a younger viewer.

John-Paul Howard plays Ben, a teenager who, after some trouble at home, is sent to live with his dad for the summer in a resort town. The hope is that Ben and his dad (Jamison Jones) will rekindle their floundering relationship, while a few weeks of hard work and personal responsibility will help Ben to escape his own demons. The house next door is currently being rented out by a family whose son Dillon (Blane Crockarell) takes a liking to Ben. Unfortunately for them, an evil force living under the property has taken a liking to Mom (Zarah Mahler). As these things go, Ben is now tasked with the responsibility of alerting the neighboring family of the supernatural misdeeds apparently afoot, but given his own checkered past and the surface level insanity of his claims (a rotten monster lady made of grass is coming to eat your memories!) it’s not easy for Ben to make any headway. Add to that a burgeoning romance between he and a new coworker (Piper Curda), as well as a new woman in his father’s romantic life (Azie Tesfai), and Ben’s got a lot on his plate.

This thoroughly plotted film draws upon a wealth of influences, most specifically Rear Window, The ‘Burbs, The Conjuring, The Grudge, The Blair Witch Project, and The Evil Dead. There are worse things to draw from, but as is the case with The Wretched, not enough is done to separate these ideas from their source material, leading to a film that feels less like a complete narrative and more like a greatest hits reel of superior work. This is not necessarily a problem since the film mostly works as a piece of entertainment, but there are so many cool ideas floating around within it that are abandoned to make room for tried-and-true spooky imagery. There’s an identity brewing just below the surface, and it stings to see how close it comes to manifesting. It would be easier to forgive a less ambitious film for making this mistake, but in the case of The Wretched, an often beautiful film that is skillfully made as a piece of horror craft, it’s a bit disappointing. As previously mentioned, however, the third act is one for the record books.

This final reel is chock full of sudden shocks, slow-release spooks, and some pretty off the wall gore effects. The creature design for our big baddie, when she finally does show her rotten, earthy face, is some of the best of recent memory. It’s a very scary look, and the execution (Performance? Effects? Both?) is aces. If the preceding movie is meant to be a slow burn — a concept at which it is only intermittently successful — the payoff retroactively makes it worth the wait. A few surprise developments bring some weight to the scares, even if one of these reveals features a fatal flaw that makes it impossible to link with strong character work. It’s an either/or situation that I can’t discuss in detail without spoiling what is, by most metrics, a pretty good reveal, but it’s quite emblematic of the main problem I had with the film: it could have benefit from a few more rewrites.

All in all, The Wretched is a mostly effective thriller whose biggest sin is how frustratingly close it comes to clearing the bar. Even so, an ambitious horror movie with a roster of great performances and a keen eye for craft is not something that a horror hound like myself can resist, and I would absolutely recommend it to anyone looking for a solid coming of age story with a few good scares peppered throughout, and a beastie that totally rocks.

The Wretched is now available on VOD.