The Hunt was supposed to see release in the last quarter of 2019, but due to the current media machine in which hair trigger, reactionary anger reigns supreme over the collection of actual information, the release was pushed back to spring 2020. For those who don’t remember what went down, here’s a short primer:

The trailer dropped, and its inclusion of politically loaded language spurred a social media reaction. Depending on who you asked, the film was either about good guy conservatives hunting bad guy liberals, or good guy liberals getting revenge on bad guy conservatives. These ideas bounced around Hell for a bit and then — oh wait, did I say “Hell”? I meant to say “Twitter.” My bad.

These ideas bounced around Twitter for a bit until eventually President Baby chimed in with a tweet storm of his own:

“Liberal Hollywood is Racist at the highest level, and with great Anger and Hate! They like to call themselves “Elite,” but they are not Elite. In fact, it is often the people that they so strongly oppose that are actually the Elite. The movie coming out is made in order to inflame and cause chaos. They create their own violence, and then try to blame others. They are the true Racists, and are very bad for our Country!“

While he wasn’t specific as to what movie he was referring to, the message was clear (well, as clear as such messages can be). Reactionaries on both sides of the political aisle had their say and before long, the studio pulled the release indefinitely, citing recent shooting incidents as their reasoning for doing so. Convoluted, yes, but also quite culturally on-brand, as it were. 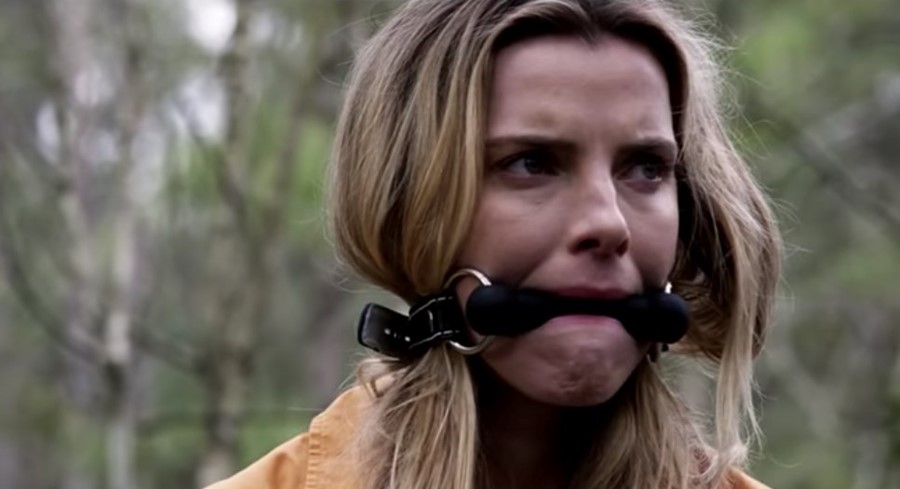 Now, just a few months later, The Hunt is finally hitting theaters, and is doing so with a host of free marketing at its back (which was likely the plan ever since the first trailer caused such a stir). Time will tell if the trumped up controversy (pun intended) will help or hurt the film, but those who do plunk down a few bucks for a ticket will hopefully share in my enjoyment of the ridiculousness of it all. No, this movie isn’t even remotely skewed to the left or the right. Nope, it’s explicitly about how fucking stupid people are when they blindly subscribe to a tribe, narrative-skewing information be damned.

Granted, the cultural commentary on display in the film is not very deep. The Corman-esque thematics are much more in line with They Live or The Purge than they are with Us. And really, when you’re dealing with a gleefully-violent riff on The Most Dangerous Game, a degree of thematic shallowness is certainly appropriate.

The Hunt wastes no time getting to the goods, opening on a gory, violent scene which occurs on a private jet to an undisclosed location. Shortly after, we’re introduced to a group of twelve strangers who wake up in the middle of nowhere, stripped of their personal possessions and with their mouths gagged shut. No one can figure why they were brought to this place, but when bullets immediately start flying, it’s clear that they’re all being hunted.

After a batshit insane sequence of poetically designed violence, the story primarily follows Crystal (Betty Gilpin), a woman whose general mistrust toward everything around her, mixed with her considerable skills as a fighter and survivalist, makes her a force to be reckoned with. She decides that she’s not only going to survive this strange ordeal, but she will also be bringing the fight to her captors. That’s all there is to it, really. What follows is a gruesome survival movie that uses the loaded language of our left vs. right OBSESSED culture for humor.

Yes, humor. The hunters are portrayed as liberal elites whose obsession with performative wokeness makes them blind to their own capacity for evil. The hunted are portrayed in an equally unflattering light as a bunch of nationalist conspiracy theorists who fear change and anything non-white. Neither group is expressly condemned or applauded by the movie, but both are thoroughly mocked for their equal ability to make extreme assumptions about people and situations of which they have very little information, as well as their disinclination to be even remotely introspective. This will undoubtedly piss both conservatives and liberals off for identical reasons, namely that neither side wants to be told that their approach to political discourse is both childish and lacking in effectiveness. How brilliant, whether intentional or not, for a film that speaks on how we need to be better about obtaining information before forming die hard opinions to have been made into a controversial cultural item by way of the angry opinions of people who haven’t even seen the damn thing.

Now that people can see it, you will see two types of reviews for this movie:

“It’s bad because it’s about liberals hunting conservatives, which is very anti-conservative”

“It’s bad because it’s showing liberals as evil, which is anti-liberal.”

Both of these reads are purposefully myopic, and will be put forth by people who have difficulty accepting that their “team” isn’t above criticism. It’s my opinion that these takes are not to be trusted, and are furthermore emblematic of the exact mentality that this movie is lampooning.

Yet as I sit here and type type type away about the thematics of the film, I’m leaving little space for what really makes this film worth seeing: it totally rips. Heads explode, arrows pierce torsos, land mines liquify people. Heck, even the blade of a food processor is used to incredibly gory effect. While some of the action direction leaves a bit to be desired, favoring fast (although not cryptic) edits over clean blocking, the tension and fervor of the action never loses its edge. Kudos to Gilpin and a scene-chewing Hilary Swank for really digging into their roles in an infectious way.

Above all dumb political concerns, this is a “humans being hunted” movie, and it’s a pretty good one.