Still in his early thirties, playwright Tarell Alvin McCraney has already achieved uncanny success, with half a dozen plays produced by the top theaters in England and America, including the Royal Shakespeare Company, New York’s Public Theatre, Chicago’s Steppenwolf Theatre, and London’s Young Vic. He is most acclaimed for The Brother/Sister Plays, a trilogy set in Bayou Louisiana and incorporating elements of West African mythology.

“McCraney has created a family quilt of sorts with The Brother/Sister cycle,” says Allen Radway, artistic director of Simpatico Theatre Project, which is currently producing The Brothers Size, part two of the series. “Each generation adds its own patch and voice to the history, sometimes reinforcing it, sometimes refuting it, but always providing new perspectives and progress.”

“He is one part William Shakespeare, one part Bertolt Brecht, one part August Wilson, and jumps from Yoruban spirituality to Beyonce quotes in two lines of dialogue,” says Daniel Student, artistic director of Plays and Players Theatre. “His characters are highly recognizable and contemporary and, much like the work of one of McCraney’s mentors, August Wilson, seemlessly confront every day challenges within much larger, grander themes.”

Plays & Players is staging part three of the series, Marcus; or the Secret of Sweet. “The play is set in ‘the distant present.’”, says Student, who is directing the work. “It reminds us all of this ancient ritual we are taking part of, with roots as far back as our first ancestors in Africa. It also focuses us in on the simplicity of character and emotion. It allows you to strip away the rest of it as a director and just tell the truth.“

James Ijames, director of Simpatico’s The Brothers Size, was attracted to McCraney’s depiction of black characters. “I was really taken by how fraternal relationships were drawn in this play. He is engaging black masculinity and black male affection in such a fresh way,” says Ijames. “They are complicated and flawed and human and beautiful.”

In November, Temple University is staging student productions of all three works in the Brother/Sister series. The trilogy begins with In The Red And Brown Water, about an attractive track star, Oya, dealing with the death of her mother. The Brothers Size features one of Oya’s suitors, Ogun Size, and his brother Oshoosi, newly released from prison.

“McCraney really finds his style in Brother Size,” says Ijames.”I think this play is the cornerstone of the trilogy.”

“It operates like a parable or fable,” adds Radway, “which unpacks itself uniquely for each audience member while stressing the basic human need for community, fellowship, and understanding. It also has gorgeous, effective poetry—spoken by men who usually aren’t credited with rich, eloquent inner-lives.” 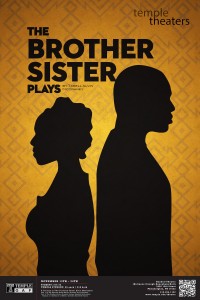 Characters from both Red and Brown and Brothers Size appear in Marcus, a coming-out story set in a Louisiana Bayou housing project. “It would be technically a drama, but its got a lot of funny.” says Student, “The humor is really built out of the true love between so many characters onstage. There is so much vitality in these people, these strong people who face storms and poverty in one of our most devastated areas of the country.”

“Marcus fits the scope of Plays & Players mainstage while Brothers Size is really appropriate in its space in Walnut Street Studio 5, There are more than three times as many characters in Marcus,” says Student. “I really urge people to see both; you get a sense of how a great playwright can write two plays in the same world that have such different tones and have openness to such different interpretations.”

One Reply to “Tarell Alvin McCraney’s Brother/Sister Trilogy: Philadelphia audiences get a great look at an acclaimed new playwright”