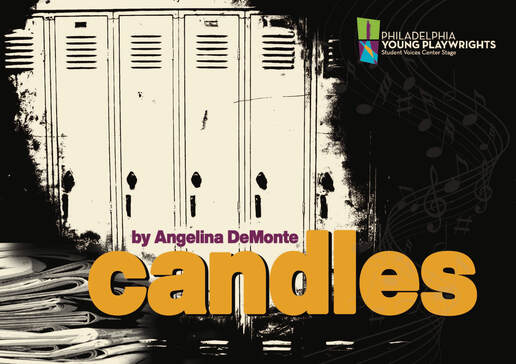 Inspired by the experience and advocacy of students at Marjory Stoneman Douglas High School after the 2018 school shooting in Parkland, Florida, one local young playwright is asking audiences to pay attention to youth voices and to see past partisan politics.

In Candles, Angelina DeMonte, Philadelphia Young Playwrights resident playwright and Harriton High School sophomore, shows how deeply youth are affected by these tragedies and highlights the multitude of ways they can – and do – grieve, process, speak out, and advocate for themselves. With at least 100 incidents of gunfire on school grounds in the US in 2019 so far, and over 100 reported threats against schools a month in Pennsylvania in the last academic year, this incredibly timely world premiere will be Philadelphia Young Playwrights’ first ever Barrymore-eligible production.

“I created characters who are journalists, because as a writer, I understand how writers think – the ability and the drive to pick something apart in order to figure it out, to look deeper into questions that some people may be too scared to ask,” says DeMonte. “The writing and speeches of the Stoneman Douglas students after the 2018 shooting were also inspiring. And I was curious about the idea of speaking out in different ways than what’s usually publicized, and to explore how student journalists might navigate the issue fake news.”

Directed by Bi Jean Ngo, Candles will premiere at the Arden Theatre’s Hamilton Family Arts Centeron Thursday, January 16, 2020, at 7:00pm and run through January 25. Supported by DeMonte’s extensive research into the Parkland shooting, the play follows three students in the school newspaper club after their Philadelphia area school high school is attacked by an armed student. Candles explores their carefully crafted, individualized responses to trauma, and seamlessly integrates poetry, spoken word, and music as the students realize they can make their voices heard not only through traditional protest, but by using what they know best: writing, reporting, and music (sound design by Lucas Fendlay). It stars Ang Bey, Danielle Coates, Owen Corey, Tyler S. Elliott, and Yannick Haynes.

“DeMonte researched the effects of trauma, and then took the different potential responses to trauma and personalized them, grounded them in the details of these characters’ lives to show that there’s more than one way we can walk away from a devastating event like this. She has an incredible ability to synthesize information she’s passionate about and put it down on the page so that it comes to life as a story rather than just facts,” says Mindy Early, Philadelphia Young Playwrights’ director of education and program services, and a trauma-informed teaching artist and trainer.

This production of Candles builds on Philadelphia Young Playwrights’ efforts in recent years to lift young people’s voices into community conversation as legitimate artists. It is the first production of their Resident Playwright Professional Development Project, which offers one student playwright the crucial opportunity for pre-professional development; a full-fledged, professional production; and portfolio-building.

DeMonte started writing plays in eighth grade through Philadelphia Young Playwrights’ in-school program. Her first play, Say Who Are You That Mumbles In The Dark, was selected among over 700 entries for Philadelphia Young Playwrights’ New Voices Festival and was performed at Temple University in October 2018. It was during this production that she first realized she could channel her passion for speaking out against gun violence through her playwriting. She has been in the Resident Playwrights Program, where she developed Candles, since 2018. The multidisciplinary play draws on her experience as a poet, actor, spoken word artist, and musician.

Each performance will include a talkback led by a Philadelphia Young Playwrights staff member. The talkback will feature various members of the artistic team, and will give audiences and artists the opportunity to learn from one another, while offering insights into the creative process and the thematic content of the work.