The night I saw The Irishman was a night seemingly designed by fate to keep me at a perfect level of discomfort. Being a sold out screening, audience members had to wait in line for access. Unfortunately for us, it was pouring rain, and the previously scheduled film hadn’t let out yet, giving the festival brass no other choice but to keep us outside. Once we got in, the not-so-spacious seating of the Philadelphia Film Center in conjunction with the entitled attitude of old white people made for an extremely difficult pre-film rush. The film itself is just under 3.5 hours long, and the bathrooms at the theater are literally in the basement. Together, this pretty much ensured that every aspect of seeing The Irishman would be distinctly uncomfortable top to bottom. Needless to say, before the movie even started, I was regretting having picked up a ticket.

But then the movie began, and it was so damn good; so damn engaging, that I never thought about my surroundings once. I never had to leave for the bathroom. I never had to deal with some stuffy old guy making passive aggressive comments in response to his own discomfort. I never once had to weigh my own discomfort against that of my seat neighbors. Nope, once The Irishman began telling its epic tale of mob life writ large, I, along with everyone else in the theater, was transported to Scorsese’s stunningly realized world, surrounded by an ensemble of legends doing what they do best.

My intention with these comments are not to disparage the festival itself (which worked commendably hard to minimize discomfort as best as they could) but more to highlight that for so much discomfort to fade this quickly and thoroughly is a testament to how perfect a moviegoing experience The Irishman is. 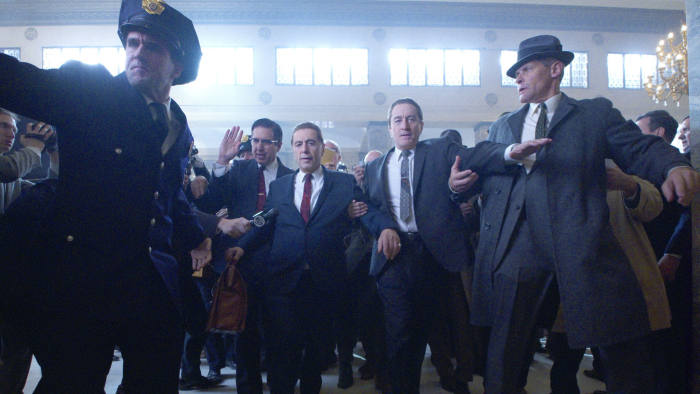 Based on the book I Heard You Paint Houses, in which author Charles Brandt brought prose to interviews conducted with retired hitman Frank Sheeran, The Irishman aims to tell a sprawling story. Beginning in an retirement home where our hero (although not a hero) is living out his unceremonious final days, we are told of his first interactions with mob life. In the present day, Sheeran is played by Robert De Niro in heavy old age makeup, which looks genuine. In the earlier flashbacks of the film, he is played by De Niro under heavy digital de-aging makeup. The de-aging is not the distraction we all feared it would be, however. It is indeed noticeable, but after just a few minutes, it’s easy to forget about. This is due in part to the quality of the digital work, but also due to the thematic material on display. As these early flashbacks are coming deep from the recesses of an old man’s memory, it’s natural that they would look a little heightened — that young Frank Sheeran might have fewer creases on his brow in his mind’s eye.

Sheeran’s career began as a delivery driver, but as these things go, he’s soon carrying out hits for local gangsters (Philly represent, babayyyy). He’s a “house painter,” a nomenclature made in reference to the splatter of blood which accompanies a well-placed bullet. Stoic and professional, Sheeran’s connection to the mob increases at the same rate that the connection with his family dissolves. Meanwhile, he starts to win the favor of two powerful gangsters: the number one man Angelo Bruno (Harvey Keitel), and his number two, Russell Bufalino (Joe Pesci). They assign Sheeran to protection detail for Jimmy Hoffa (Al Pacino), and as these things go, loyalties clash, triggers are pulled, and snarky dialogue is uttered at a clip.

But Goodfellas this is not. In telling such an expansive story, Scorsese (operating from a delectably thorough script by Steven Zaillian) focuses less on the glamour of the mob life and more on the emotional toll it takes on a participant’s life, villainous as they may be. It’s a mature work, made by a master in the final act of his life. Not only is this a biopic about Frank “The Irishman” Sheeran, its also a metatextual commentary on Scorsese’s career in whole. Fitting that he’d hop into the mob genre once again, given that he has always been mislabeled as a guy who only makes gangster films (they actually make up the minority of his filmography). The biggest indicator that this is a departure from his previous work in this genre is the way that the violence is framed. Contrary to the violence in both Goodfellas and Casino, the camera does not linger on the bloodletting in The Irishman. Sure, it’s often sudden and always shocking, but it’s never the focal point of the scene. Sheeran may empty a gun into the back of someone’s head, but rather than reveling in it and trying to shock the audience, Scorsese smartly presses forward, instead focusing on the weight being a triggerman places on our protagonist.

A lot of deserved praise has been heaped on the performances of the film, and I can confirm that across the board every one is fantastic. Many critics have highlighted the deeply felt performance from Joe Pesci as the film’s standout, and while his performance is more than award-worthy, its Pacino’s Jimmy Hoffa that runs away with it. As someone who popped into existence long after Hoffa popped out of it, my knowledge of who he was has come from sound bytes and conspiracy theory subreddits. Pacino brings to life a man who exists in the cultural zeitgeist similarly to Bigfoot and the Loch Ness monster. It’s easy to see why Hoffa was able to build such a prominent groundswell of support among the teamsters.

It’s easy to see why his ego eventually lead to imprisonment. It makes perfect sense that, even after
spending time in prison for fraud, people would be happy to see him rise to power once again. And with Pacino’s energetic performance, I can understand why someone like Hoffa, even after being told to step down from the union at the threat of his own life, would press on with glee.

Pacino, too, gets the bulk of the film’s laughs. It’s worth noting that in the conversation that The Irishman wants us to have about Scorsese’s career, we must remember that when it comes to character-based comedy, few filmmakers can do it better than he.

Needless to say, none of this works without the editing prowess of one Thelma Schoonmaker, who deserves a mention in any piece written about any movie she’s attached to, even The Snowman.

Listen, you already know if you’re going to watch this movie or not, and luckily for you, it’s going to be available on Netflix in a few short weeks, but if this is your sort of thing (and I urge you to make better choices if it’s not), make the effort to see it on the big screen. You could be soaked, uncomfortable, surrounded by mouth-breathers, and courting a finicky bladder, and The Irishman will whisk it all away with its cinematic wizardry. I’m living proof.

Part of the 2019 Philadelphia Film Festival. Scheduled for general release on November 1, 2019