The buzz going into The Lodge has been considerable. While early horror reviews are often replete with hyperbole, there was still good reason to believe that the latest film from Austrian duo Severin Flavia and Veronica Franz would be worth checking out. Their previous collaboration, Goodnight Mommy, was a stylish slow burn thriller which, despite its painfully obvious twist, had enough command of mood to keep it afloat. The same can’t be said for The Lodge, a film which opens strong and then fizzles almost immediately, ultimately descending into a series of utterly moronic plot revelations that not only fail to keep the film afloat, but actively sink it.

Set shortly after a tragedy leaves young Aidan and Mia in the care of their father, The Lodge places the two children alone in a remote winter home with their soon-to-be stepmom Grace (Riley Keough) for a few days while Dad (Richard Armitage) takes care of some vague business in the city. The siblings are distinctly unhappy with this situation. Neither of them care for Grace that much, partially because they see her as the reason for their parents’ initial split, and partially because she’s the sole survivor of a cult that their dad, champion of journalistic ethics as he is, has been writing a book about. It’s gross, and the film does little to address just how gross it is. Then again, the film doesn’t really use this cult backdrop for much of anything beyond surface-level plot thrust, none of which is engaging. 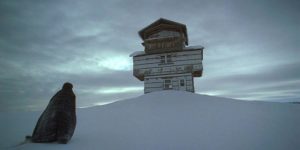 Once dad drives off, things start getting weird pretty quickly. The tension in the household is understandably high, but every time the emotional posturing looks as if it may begin to fade, and the children may start seeing Grace as a family member, seemingly supernatural weirdness starts getting in the way. A few jump scares here, a couple of unsettling images there, and you’ve got yourself a perfunctory little thriller that is largely absent of any thrills. The turgid pace has a sedative effect, making the space between the jolts extremely difficult to sit through. At one point, our snowbound trio watches John Carpenter’s The Thing together, inadvertently reminding the audience of a high bar that this film falls flat on its face trying to clear.

The performances are excellent across the board, even though the characters are powerfully unlikable (with the grand prize going to Dad, who is just the woooooorst). None are able to rise above the ridiculous material, and they receive no help from the bland, flat filmmaking which houses it all. What begins feeling like a strong sense of mood soon reveals itself to be the accidental product of filmmakers having the right ingredients and chancing upon a tried and true tonal concoction (see: The Thing). But without a knowing command of said tone, the mood fades by the end of act one and never recovers. And really, if your movie hinges upon a big reveal, the reveal can’t be this aggressively stupid.

I would like to note that Aidan and Mia are played by Jaeden Martell and Lia McHugh. Aidan/Jaeden, Mia/Lia. That is all.

Part of the 2019 Philadelphia Film Festival. Scheduled for nationwide release in February 2020.