Alison Whitehurst plays songwriter Cynthia Weil in the touring production of Beautiful: The Carole King Musical. Weil and her partner, Barry Mann, have penned some of the most recognizable songs from film, theater, and radio. Beautiful features some of their hits including “Up on the Roof,” “You’ve Lost That Lovin’ Feeling,” and “One Fine Day.” Whitehurst talks about the award-winning show and being on tour.

Beautiful is playing at the Academy of Music January 8th through January 20th.

Debra Danese: You started your musical training as a pianist and vocalist. How did this segue into theater?

Alison Whitehurst: I did!  My father is a pianist who played in a band for 30 years. I grew up by his side at the piano at home, and crashing various gigs watching the band from the sound booth as a kid.  I experienced the power of live performance. It moved me and felt different than the way I felt when I listened to a record. There was a magnetism about it that was unique and made me feel viscerally because, looking back now, seeing the singer’s face or feeling the horns swell right in front of me added this extra element of drama.   I transferred to a new school in middle school, and my mother recommended I sign up for theater as an elective hoping it would help me make friends. I was introduced to acting there, which gave way to musical theater – the art form that hit all the boxes for me: live, visceral, the perfect blend of physicality and voice, and that invites anyone willing into a story.  It’s magic!

DD: What was your very first experience onstage in a musical?

AW: My very first experience in a musical EVER was Fiddler on the Roof, Jr. in the seventh grade. 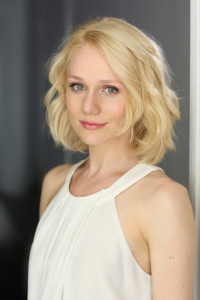 DD: What did you learn about Cynthia and her creative process while researching this role?

AW: From what I’ve gathered from various interviews, it seems Cynthia’s process is methodical and efficient – working with each verse until it’s right, while still managing to stay on the cutting edge of the teeming competition of 1650 Broadway where she, Barry, Carole, and Gerry wrote.  She largely drew inspiration from the experiences of her friends rather than her own, with the exception of “Don’t Know Much,” which she specifically wrote about her love for Barry. She values the relatability of a lyric and prizes the songs she feels speak from a unique perspective. To quote Barry, “her lyrics are sophisticated and soulful.”

DD: Did you have the opportunity to meet and discuss your role with Cynthia Weil?

AW: It would be an absolute honor, but unfortunately I have not had the privilege of meeting her personally. I would love to someday. Thankfully, Cynthia and Barry are so generous with their time and insight in countless interviews accessible to us online.

DD: What song from the show do you find most stuck in your head when you’re not onstage?

AW:  “Walking in the Rain.”  It comes at such a pivotal point in the musical for Cynthia from a story-telling standpoint, and the orchestration of this moment in Beautiful is wonderfully dramatic and incredibly lush!

DD: What is your favorite part of being on tour with this show?

AW: Where to begin!  Being on tour with Beautiful is one of the best things that has ever happened to me.  I love the work, I love the travel, and I love the friendships I’ve built.  Telling this triumphant story successfully and truthfully 8 times a week all over the US and Canada is a marvelously satisfying challenge, and I get to do it among the most intelligent, above and beyond performers and crew that stretch my idea of excellence every night.  It feels good to share a story that celebrates the resilience and brilliance of the legendary Carole King. But even simpler, it’s a story of blossoming into who you were always meant to be, and that’s special to me.