Philadelphia prepared itself for the first snow storm this season. Within minutes, the large Buddha in my garden looked like Santa Claus and the life-sized sculpture of a young centurion looked like one of the wise men who had aged before his time. One news flash after another warned about accidents, especially with a long downpour of rain afterwards.

One of the secrets of the Walnut Street Theatre success story

I had hoped that the Walnut Street Theatre would reschedule its opening of its Studio 3 production of WINTER WONDERETTES, directed by Richard Parison. At 5:43 PM, 107 minutes before curtain time, I received this email from AnnaBeth Crittenden, the new press person at WST: “It’s Snowing Outside and WINTER WONDERETTES Opens Tonight”.

That update reminded me of a conversation I had with Denise Daher Hodgson, the former chair of the board of directors. She told me how, a few years ago, when there was a really bad snow storm, she and the entire WST board called every single ticket holder to let them know how much they appreciate their support and that the show was still on.

Such commitment from everybody, including the board of directors, explains part of the reason why the Walnut has the world’s largest subscriber base and plays to mostly sold-out performances night after night, matinee after matinee—rain or shine, or Philly snow and sleet.

Frankly, I didn’t want to brave the weather, but after that email, I didn’t want to ask for a rain check. As I didn’t trust the roads with my car, I walked 10 minutes toward the nearest Septa stop. Big mistake. In both the suburbs and the city, many storm drains were clogged. The trains were delayed, but I managed to make it to the Walnut on time, looking like a madman who had waded into a lake, with my trousers dripping and my shoes squishing because of all the water. I still didn’t want to see the show.

And then the magic of theater took over, making me forget all about my wet and ice-cold feet. 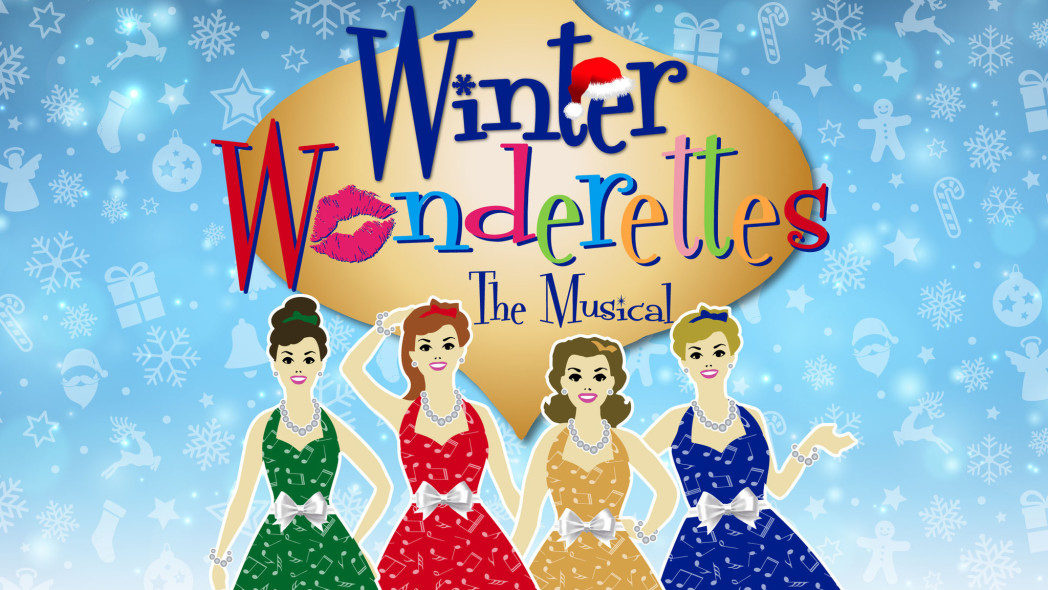 The brilliant Billy Thompson from California—pianist and vocal director for this show—created the musical backbone to the WINTER WONDERETTES. Sitting at the back of Studio 3 in a cleverly-devised place where furniture, even trees, could be turned into something else within seconds (designed by Colin McIlvaine), the pianist sat behind what looked like an upright piano dressed up with cheap Christmas wrapping—actually a musical wonder machine that created any sound imaginable (enhanced by John Kolbinski’s sound design).

Four ditzy employees at Harper’s Hardware Store in a Midwestern town (talented actors and singers Jenna Pastuszek, Rebecca Robbins, Amanda Jill Robinson, and Kayla Tarpley) dressed to the hilt with sets of the glitziest, most elegantly overdone costumes and shoes (dazzlingly created by Amanda Wolff and enhanced by Robert Perry’s lighting design), went all out to produce their annual holiday party—with the audience cast as the other employees. Yes, squishy shoes or not, we all became part of the most unusual Christmas party ever.

I asked the director, Richard Parison, long-time casting director at the Walnut, former associate artistic director at the Prince Music Theater, and now artistic director for The American Theatre in Hampton, VA, to tell me about the selection process of the delightfully wacky country bumpkins: “The ladies in auditions each brought a unique authenticity to the role. Bernard Havard and I saw each of these [artists] as talented singers, actresses, and comediennes.  The show doesn’t allow itself to be taken too seriously, and audiences will enjoy it only when the actresses do take it seriously. Comedy is hard, but [they] make it look easy.”

Going by the laughter in the audience in scene after scene, the hilarious script by Roger Bean and the work of the director, the actors, and the creative team created a most entertaining evening, with a number of thought-provoking moments. Studio 3 at America’s oldest theater got into the Christmas spirit just in time for Thanksgiving. 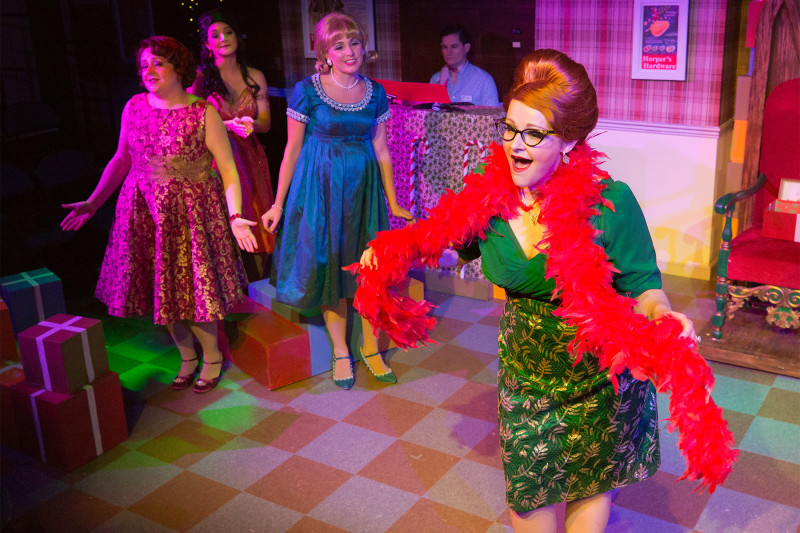 Christmas: “In honor of our friends of the Jewish persuasion”

We laughed when one of the lovely ditzies earnestly declared that there was something for everybody:

SUZY: And just by coincidence, I’m wearing blue in honor of our friends of the Jewish persuasion. [SHE looks proudly to the others.] Happy Hanukah! [SHE mispronounces Hanukah as Hanookah. The girls correct her.]

Studio 3, decorated to the hilt with Christmas paraphernalia, exploded with joyful, sparkling laughter.

In his review of WINTER WONDERETTES—in the 11th Hour Theatre Company production at Theatre Horizonin 2012—theater critic Steve Cohen asked, “Was Santa Claus Jewish?” and listed some of the many Jewish writers or composers of Christmas songs: “Irving Berlin (“White Christmas”), Mel Tormé (“Chestnuts Roasting on an Open Fire”), Jay Livingston (“Silver Bells”), Johnny Marks (“Rudolph the Red-nosed Reindeer”) and Sammy Cahn and Jule Styne (“Let It Snow”). He ended his review with a question that some folks with kippahs might ask each other at a Chinese restaurant on Christmas Eve: “Where would the Christmas season be without the chosen people?”

Coming from Germany, I was intrigued when one of the employees (the hilarious Amanda Jill Robinson) took apart the old German song “O Tannenbaum” from 1824, with the music going back to a Silesian folk song from the 16th century. “The lyrics do not actually refer to Christmas, or describe a decorated Christmas tree. Instead, they refer to the fir’s evergreen quality as a symbol of constancy and faithfulness,” as my old friend Wiki reported.

The American employee didn’t want to sing the song in German and had to be persuaded—nay, forced—by her three coworkers. She sang it with such disgust that the audience laughed out loud, even though there were moments when, I must admit, I cringed a bit at the old stereotypes of German culture. However, throughout the whole show, these loveable characters made fun of themselves and each other—all part of an evening filled with humor and satire, making fun of and even celebrating human foibles.

I couldn’t think of a more enjoyable evening during the holiday season—German, Jewish, or American, even Chinese!

Our lovely Winter Wonderettes, with Billy in tow, will entertain Virginians in January

Instead of attending the reception after the opening, I dashed home, soaked even more because of the accumulation of melting snow from the clogged and overflowing storm drains. Humming some of those catchy Christmas jingles, I inadvertently jumped into one foot-deep puddle after another and arrived home, ready to write my review of the show that will run through December 30—dripping like a snow man in July.

Richard Parison, with whom I talked briefly during the intermission of this 1 hour and 40 minute show, told me gleefully that one of the many reasons he likes living in Virginia is that, “We have 65 degrees down there now.” I tried to ignore that comment, but my cold Philly toes replied silently by wriggling fiercely inside my waterlogged loafers.

On that ice-cold, stormy, snowy opening night in Philadelphia, I counted fewer than 10 empty seats. If the weather holds in Virginia, I am sure The American Theatre in Hampton will have to add chairs to this glitzy, ditzy, delightful WINTER WONDERETTES show when it opens there on January 11, 2019.