“Performing this piece is probably the most terrifying thing I’ve ever done.”
—Josh Hitchens

With a one-man adaptations of Dracula and Frankenstein and a terrifying dramatization of Jeffrey Dahmer’s own words, Josh Hitchens has become known as “Philadelphia’s foremost purveyor of the macabre” (as Deb Miller put it). His newest work, GHOST STORIES, premiered this year at SoLow Fest and returns Halloween night (October 31) at the Hill-Physick House. Josh talks to Phindie about horror theater, phobias, and his haunted autobiographical solo show.

Josh Hitchens: On a phobia level, I am absolutely terrified of spiders and I hate the sensation of falling, so no roller coasters for me. On a more primal level, I am deeply scared of not being really seen for who I am as a person, of feeling insignificant or invisible. And the idea of completely losing the ability to be in control of myself mentally or physically is horrifying to me.

Phindie: Yes. That and ghosts. What do you think we like about ghost stories?

Josh Hitchens: On one level, I think we as human beings love being scared because it gets the adrenaline pumping. If you’re really frightened, all of your senses are fully engaged and you know you’re alive. With ghost stories in particular, I really believe we cling to them because, no matter how much they may disturb us, they are a comfort. If ghosts exist, either in reality or because we make ourselves believe in them, it means that maybe death isn’t the end. That maybe those loved ones who have gone before may not be lost to us, that maybe one day we could see them again. The act of telling or experiencing ghost stories can allow all of us to engage with our deepest fears and trauma in a way that makes it safe for us to process those feelings on our own terms. 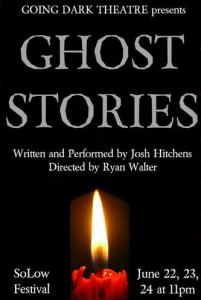 Phindie: What inspired the show?

Josh Hitchens: For a while I’ve had the idea of writing a play where characters tell each other horror stories, but I felt I couldn’t write that play without writing my own personal stories first. The piece that became GHOST STORIES has been in my head for at least two years, but I was afraid to write it down and really confront all the things that happened to me. But one day I felt ready to start telling my story, and I wrote the entire play in ten days. I couldn’t stop writing once I started, it just poured out of me. Then I started rehearsing it with Ryan Walter, who also directed Dahmer and understands me and my writing better than anyone else. We made very few alterations to the text, but we worked on finding the best ways to get the play’s message across clearly.

Phindie: You’ve produced several “horror” shows, how does this mark a departure for you?

Josh Hitchens: The major difference with GHOST STORIES is that it’s an autobiography. It’s not me playing all the characters in Dracula, or impersonating Jeff Dahmer. It’s just me up there, talking completely openly and honestly about my life. Performing this piece is probably the most terrifying thing I’ve ever done, because there’s no other persona to hide behind. I have to be completely open and exposed, and it’s scary to be that honest, and let people see who I really am. But I think it’s the most important thing I’ve ever done as a performer. It’s been extremely cathartic and healing to face my darkness and survive to tell the tale.

Phindie: What appeals to you about horror theater?

Josh Hitchens: I’ve always been drawn to making horror theater because I think it gives you unique tools to create a visceral experience for an audience, and allows you to tell powerful stories in unexpected ways. I saw the original production of The Pillowman at the National Theatre in London, and I had never felt so frightened watching a play. I screamed, I felt intense dread. And then out of that dread it would make me laugh before scaring me again. And by the end I was deeply moved by what the play was really about underneath the fright. I’ve been chasing that feeling in theater ever since. Horror gives you so many delicious ingredients to tell stories with, things an audience will never forget.

Phindie: How is theater well suited for horror stories?

Josh Hitchens: I think it’s actually more well suited for theater than it is for film in many ways. You can easily remind yourself it’s just a movie you’re watching on the screen. But theater is happening right now, in this room. That illusion of distance and safety can be shattered much more easily with theater, and become much more frightening—if it’s done well.

Phindie: What are some challenges?

Josh Hitchens: People don’t trust that unlocking and feeding the audience’s imagination is the most powerful weapon when it comes to horror. What you don’t see is always more powerful than showing the monster in full view. And never underestimate the power of taking away the lights. Then anything might be there in the dark.

Phindie: What are some examples of the genre you recommend or draw inspiration from?

Josh Hitchens: In terms of truly great horror plays, there simply are not a lot of them. But I think it’s because horror theater is a hugely untapped phenomenon, while horror movies bring in hundreds of millions in ticket sales. That’s why I’m so passionate about doing the kind of work I do. In terms of what works of horror I recommend that have inspired me, I think recent films like The Babadook, The Witch, and Hereditary really show again that a horror story can be real, and that it can be about very deep human problems while giving you supernatural shocks at the same time. Stories like those remind me why I’m doing what I do.

Phindie: Did you carve a pumpkin this year?

Josh Hitchens: I am ashamed to admit that it has been many years since I carved a pumpkin. But it’s not too late!