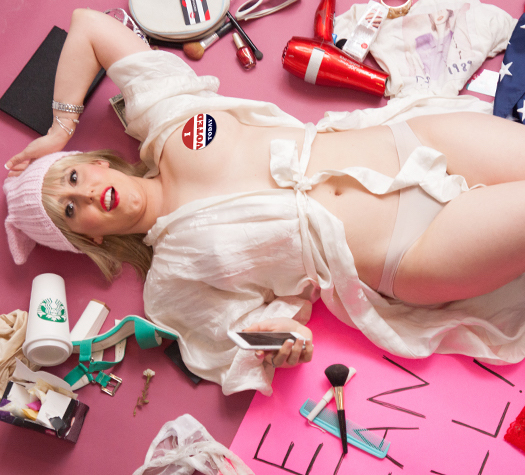 “What can I do?” asks, demands, and finally implores, Becky Harlow (Lee Minora) a perky daytime talk show host, who has just been accused of being a “classic white feminist.”

Minora, whose one-woman show was seen last spring at the Wilma Theater, has brought it back to the Fringe with all its humor and pain. WHITE FEMINIST is a no-holds-barred look at the ways in which white feminists, with the best of intentions, don’t always walk even their own talk.

“Did you vote?” Becky asks us, “Did post that on Instagram?” Then she challenges us, “Did you call your senator?” Did you do anything more than post on social media, she wants to know. It’s a scathing reproach for everyone who wanted to do well and just didn’t do enough.

Dressed in pink pussy hat, bra, and pantyhose, with middle fingers raised in defiance, Becky goes from a woman in her power to one devastated by a series of mean tweets, until she is forced to strip herself bare emotionally in order to find her own humanity and regain a sense of connection with her audience.

But is that the answer? Is claiming #MeToo status, whatever our stories, the only way to claim power? Is woman’s vulnerability the source of her strength?

Minora engages the audience, even as she challenges us to look at the ways in which we don’t always know to live up to our ideals. Or the ways in which those ideals are not necessarily as sacrosanct as we thought. Wearing a white wrap dress with a cape, she’s incessantly cheerful as the cameras roll, and in a catatonic state while they’re off.

While we can all be Beckys, showing everyone how strong and woke we are, in these challenging times, it’s good to remember that there are actions we can take IRL that are more than posting on social media. WHITE FEMINIST challenges us to do that.