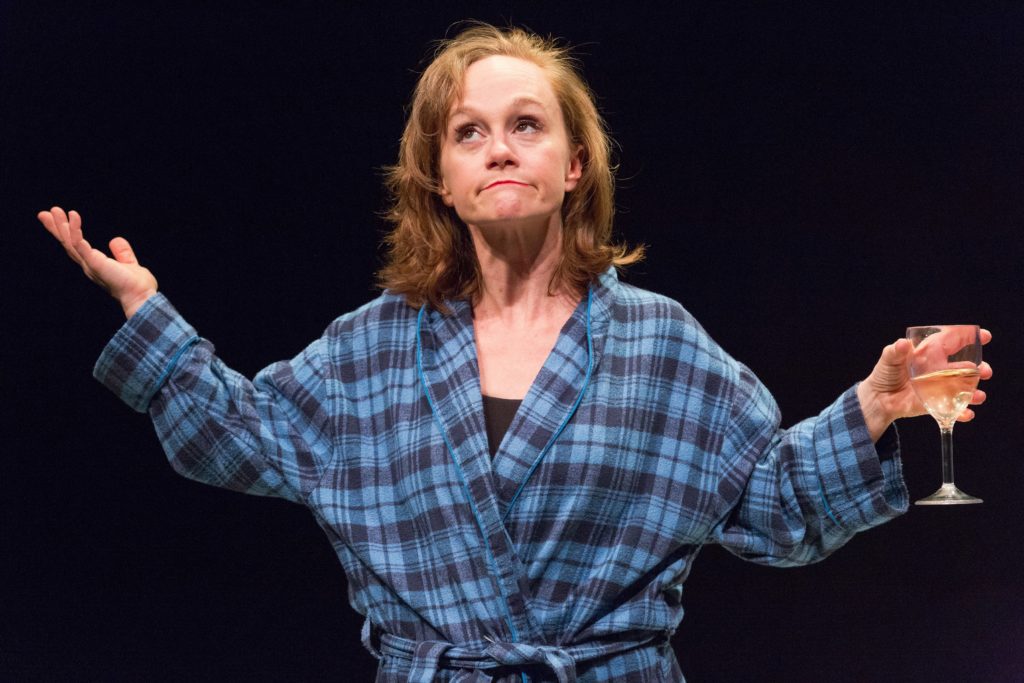 I don’t know whether Jennifer Childs has been honing and perfecting her one-person look at middle age as the near-50 examine themselves, get examined by their teenage selves and daughter, and take a peek at old age, or if the crisper, cleaner production of values at People’s Light provide advantage Plays & Players and Act II couldn’t, but this third time seeing Childs in I WILL NOT GO GENTLY is the charm.

I’ve gone from a fan and admirer to an enthusiastic supporter who believes Childs, her play, and Harriet Power’s production should make a fourth stop, to Broadway. Childs has been remarkable from the beginning playing a passel of characters ranging from a 47ish rock star making a comeback after 15 years absence to a 90-year-old making her standup comedy debut.

Acting is finally matched by sensibility. Childs’s script doesn’t seem to have changed significantly from its 1812 premiere in 2016, yet it came across as more cohesive, more cleverly structured, and totally to the point. Hitting points was the weakening spot in previous outings. I found some parts labored and too much effort given to providing a point of view. At People’s Light, I saw a total package I think is brilliant, chocked with insight, consistently witty, and filled with accurate and important notions about age.

Hey, I am not saying the other two outings were less involving or impressive. I’m saying maybe I am more in tune with all Childs is doing and expressing. Maybe I had to catch up to I WILL NOT GO GENTLY and have finally done it. All of Childs’s character creations are perceptive and on the mark. Her British rock star, Sierra Mist, has several clichéd traits, but those, including her less than Mayfair London accent, help establish her as interesting and lead to a woman who knows what she’s about and is going to get it. An insomniac podcaster asks many prime questions. Her and Childs’s mind wander into funny but familiar directions.

In fact, whether playing Sierra, the podcaster, or the 90-year-old comic, Childs’s musings are both funny and in keeping with what is on many minds. A motivational speaker is a stitch, and the insomniac’s teenager, surrounded by a sea of tablets, laptops, mobiles, and similar devices, each of them tuned to someone else — The “hello” sequence is a hoot. — is an inspired creation. Childs knows the world and proves it.

She also knows about aging, ambition, and daring to do the new. Songs by Childs and Christopher Colucci are often fun. I wish we heard more in their entirety. At least we get the seminal “Jack in My Box” on television as an epilogue. Miss this at your peril, even if I WILL NOT GO GENTLY seemed destined to have a local regional theater tour. Read more reviews at Neals Paper >>>