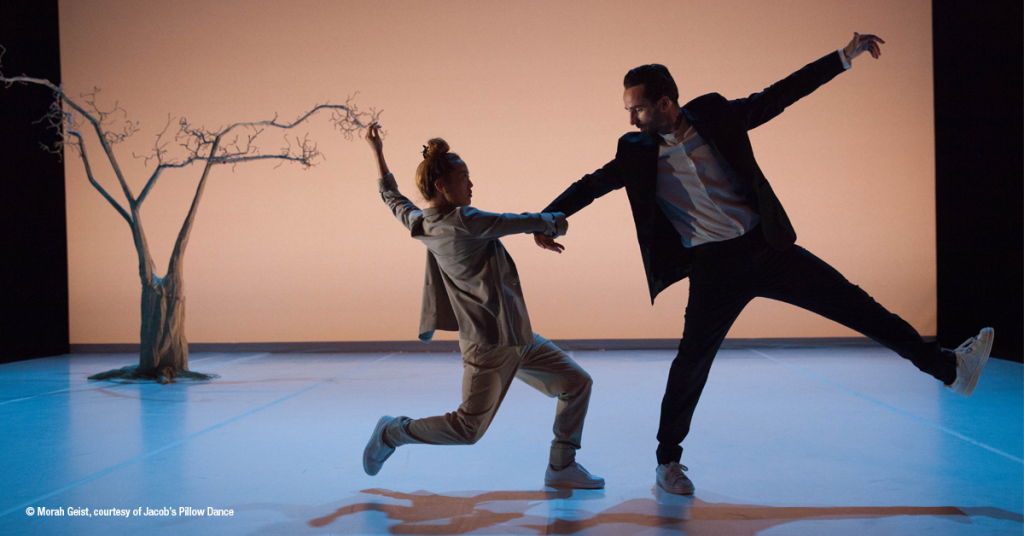 Company Wang Ramirez’s 55-minute piece, onstage this week at the Prince Theater, is titled Monchichi. For some people, the name must click their nostalgic memory of the adorable stuffed toy monkey that was big in 70s and 80s. Perhaps, they decided on the title hoping the piece would be  globally accepted and loved like the doll?

The stage set is simple. There is one white tree at the left rear of the stage. The shadow of Honji Wang, who was born in Frankfurt to Korean parents, displays slow dance movement that has some components of Tai chi.

Sébastian Ramirez, who is a Spanish born in the south of France, joins with his unique style of dance, which is based on hip hop or street dance but more fluent and aerial.  Ramirez casually throw silver stilettos to Wang. She puts the shoes on, awkwardly move around, and change into a blond wig and a blue dress. With Ramirez in black suits, they try a new dance style. But soon they agree that the style is not for them. They toss and catch a red light – a fruit that was on the tree and it leads to the unique dance style of Wang and Ramirez. It is much more than a dance performance as some elements of play such as mime and voice are incorporated.

The choreography is intellectual and consists of unexpected steps and complex but fluent movements.  At the same time, it is improvisational and spontaneous as if they are having a chat. Two people with very colorful background bring in their cultures that have made them who they are.  They test each other’s capacity, tolerance and space to know each other better and to explore and deepen their relationship.