Paul Curatolo is no stranger to Beatlemania. He grew up with their music and is following in his father’s footstep as “Sir Paul McCartney” in the touring production of RAIN: A Tribute to the Beatles. He took over the role after his father, Joey Curatolo, retired from it.  An accomplished musician, Paul’s love of the Beatles has driven him to master the character of McCartney.

RAIN: A Tribute to the Beatles will celebrate the 50th Anniversary of the Sgt. Pepper’s Lonely Hearts Club Band by playing the album in its entirety — along with other favorite Beatles classics — at the Academy of Music on March 23-25, 2018.

Debra Danese: When were you first introduced to the Beatles and how did their music influence you growing up?

Paul Curatolo:  I’m sure I was still in my mom’s belly! I was born with the Beatles music all around me. I grew up to the four lads.

DD: Who are some of your other musical influences?

PC: They include Michael Jackson, Billy Joel, David Bowie and Green Day. The list goes on and on.

DD:  How did your own musical journey begin?

PC:  I was gifted drums when I was ten for Christmas from my parents. My father and I had begun playing Beatles songs together at home. I had experience playing in bands but not portraying any characters.  I would say that it’s a family business. I’ve grown up watching my father portray McCartney with RAIN. He asked me one day if I would be interested in training for the part and the rest is history.

DD:  You play “Paul” in RAIN. What did you do to prepare to undertake such an iconic figure? 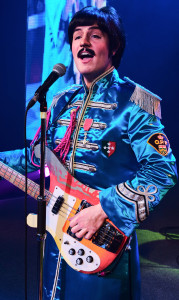 PC: Lots and lots of YouTube! Playing Sir Paul is a dream come true! The most challenging part for me would be sounding like him vocally. The most fun part is the feeling of “Beatlemania” that we create and that I feel every night on stage. The pre- show prep for becoming Sir Paul is that of mind and body. I stretch to get nice and loose and relaxed; followed by plenty of vocal warm ups. I then transform using makeup and costuming.

DD:  Your role requires you to play bass, piano, guitar and sing. What is the most challenging part for you?

PC:  The singing is, and will always be, the big challenge for me. Sir Paul has such a beautiful, precise, and powerful voice. It takes a lifetime to get it just right.

DD:  Your father, Joey, was the original “Paul” in the band. What advice did he give you when taking over the role?

DD: What is your favorite Beatles song?

PC: It varies from day to day. Their catalog is so vast that there’s a song for every mood.