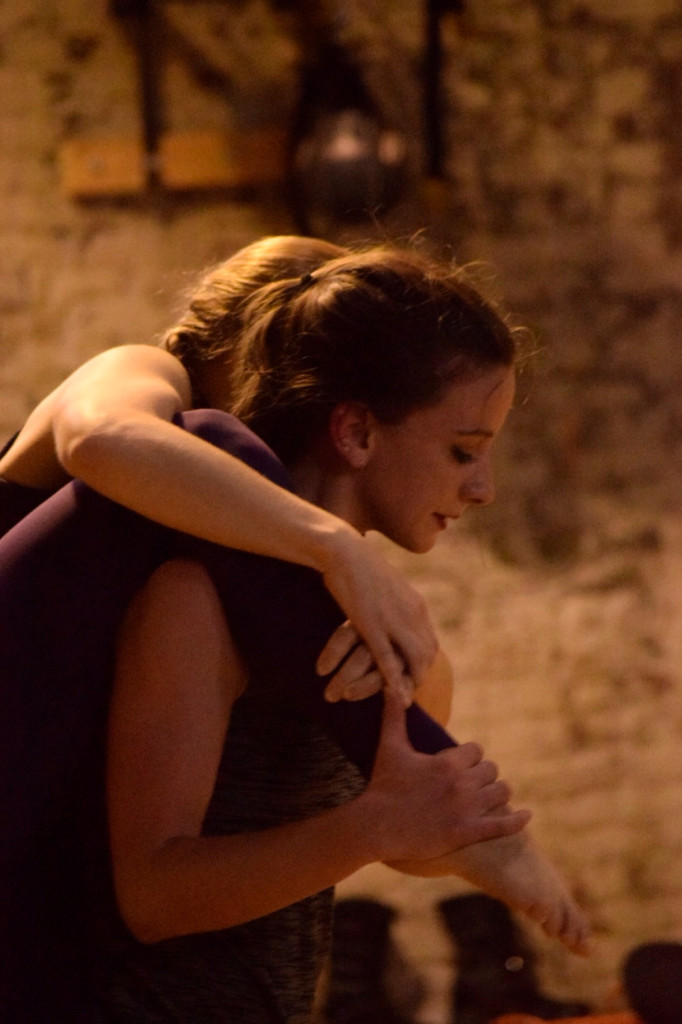 Everyone kept saying that winter was coming. It finally came on December 9th this year with several inches of snow. This winter wonderland appeared just in time to thwart any efforts of the Megan Flynn Dance Company performing outside at East Passyunk’s Second Saturday Festivities. The dancers were able to relocate inside on the second floor of Sweat Fitness, which provided a beautiful exposed brick backdrop to two well executed pieces.

The first piece, “We’re all a little bit stubborn” featured original music composed by Alan Terricciano. It originally premiered at the Conwell Dance Theater during the 2016 Philadelphia Fringe Festival and seems to have simply gotten better with time. The dancers moved effortlessly through lifts and it was mesmerizing to watch the ebb and flow of each dancer as they were entering and exiting the performance space. The obvious physical strength of each performer was complimented by their grace and intentioned focus. The small groups, duets, and solos were articulated to engage the audience in a tenacious way through persistent movements that repeated themselves throughout the piece, making the half-hour seem to go by in no time at all. Sarah Braviak’s duet with Jennifer Yackel was a personal favorite, as well as the solo performed by Katrina Juliette Muffley.

The second work, “All Dreams Collapsed in One Second,” was premiering in Philadelphia for the first time, but was selected to be performed at the Actors Fund Arts Center in New York City earlier this year. Randall Anthony Smith was a perfect pair with Marcie Mamura for the velvety five-minute duet. The use of repetition here made for a very strong, albeit short, performance. The juxtaposition of height provided intense level changes that were not seen in the New York performance, and made the collapse of dreams all the more literal for the audience.

Though outside was cold, the inside of Sweat Fitness was warm, inviting, and inspiring to all of those who witnessed the Megan Flynn Dance Company’s pop-up performance.