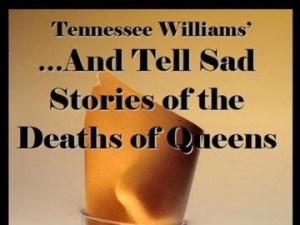 Two young guys who moved here from Tennessee in 2012 started their own theater company, which they named Blue Suede Productions as a tribute to Elvis. John-Thomas Appling and Chris McCollum deserve a lot of credit for stepping up to the Fringe so fast. For their premiere production they were smart to choose a one-act that taps into the deep wellspring of Tennessee Williams fans. A capacity crowd filled the small performance room at London restaurant. Jason Fasio and Dev Drollinger joined the co-artistic directors  to perform this sometimes funny, tender little work with Williams touchstones—an abusive alcoholic male and a delicate female (in this case a transvestite) who longs for gentility in her life, and suffers from loneliness and also from one of Tennessee’s pet physical ailments. The enthusiastic young actors do a creditable job, the set design is a perfect fit for the space, and a costumed waitress serves the drinks named in the play. Blue Suede’s fledgling effort is a promising one.

Note: Williams’s well-known works (The Glass Menagerie, A Streetcar Named Desire, Cat on a Hot Tin Roof) are vague about homosexuality. But he began writing this bold play with its openly gay characters in ’57, well before Stonewall. He didn’t publish it. AND TELL SAD STORIES OF THE DEATHS OF QUEENS finally premiered at The Kennedy Center in 2004 and was published the following year. [London Grill] September 8-9, 2013, fringearts.ticketleap.com/and-tell-sad-stories-of-the-deaths-of-queens.