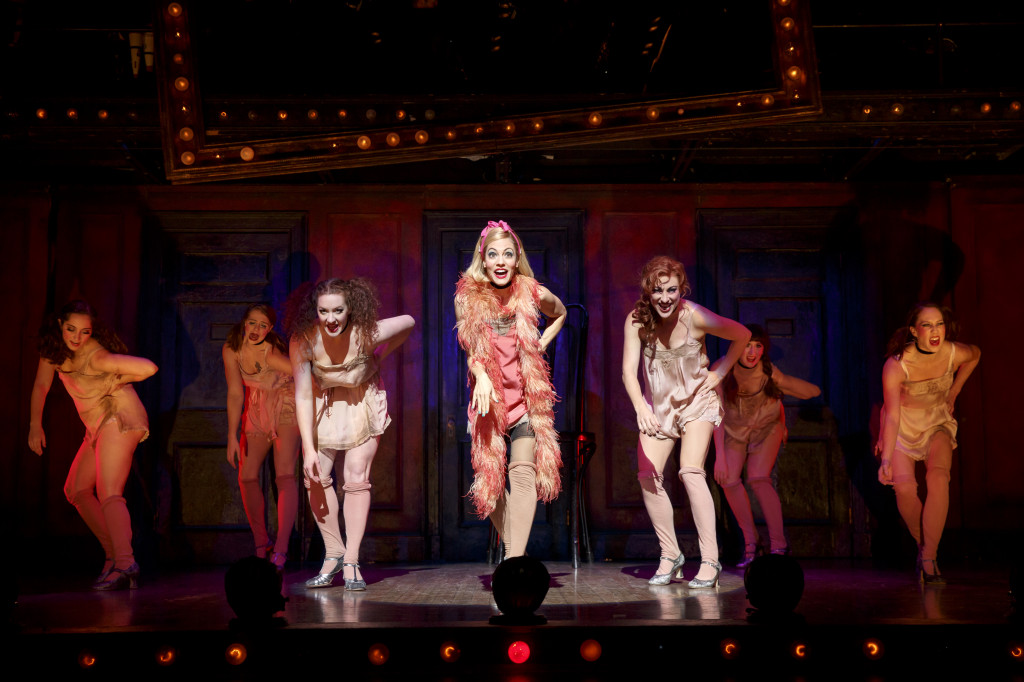 I had a panicky moment at the end of Act I when, at the party celebrating the engagement of Fraulein Schneider (Mary Gordon Murray) and Herr Schultz (Scott Robertson), Herr Ludwig (Patrick Vaill), wearing a swastika armband, begins to sing “Tomorrow Belongs to Me,” a horrifyingly catchy Nazi tune. He turns to us and asks everybody to join in, and, for terrible moment, I feared the audience would begin to sing with him. They didn’t, of course, but it did speak meaning about today’s political climate. And, I suppose, about the state of my psyche.

CABARET, the brilliant Kander and Ebb show, filled with some terrific songs (“Wilkommen,” “Maybe This Time”) is about the decadence of Weimar Germany and the rise of Nazism. A young American, Clifford Bradshaw (Benjamin Eakeley) arrives in Berlin to write a novel; he meets Sally Bowles (Leigh Ann Larkin), a showgirl at the Kit Kat Klub who becomes his roommate and his lover.

The show is a blunt assault rather than an insidious argument; loudness is a problem throughout, as it often is with touring productions, as if everyone not in New York were somewhat deaf; the cast is miked to the max, obscuring lyrics and blasting the dialogue.

Whatever the distinction is between vulgar and decadent, it is a distinction blurred here: this debauched and degenerate Berlin looks more like a crude TV show, not a dangerous and somehow sophisticated ruin. But maybe the relevance factor is that it takes more to shock us these days: when everybody and his/her aunt/uncle is wearing green nail polish, we can’t be expected to gasp at Sally’s.