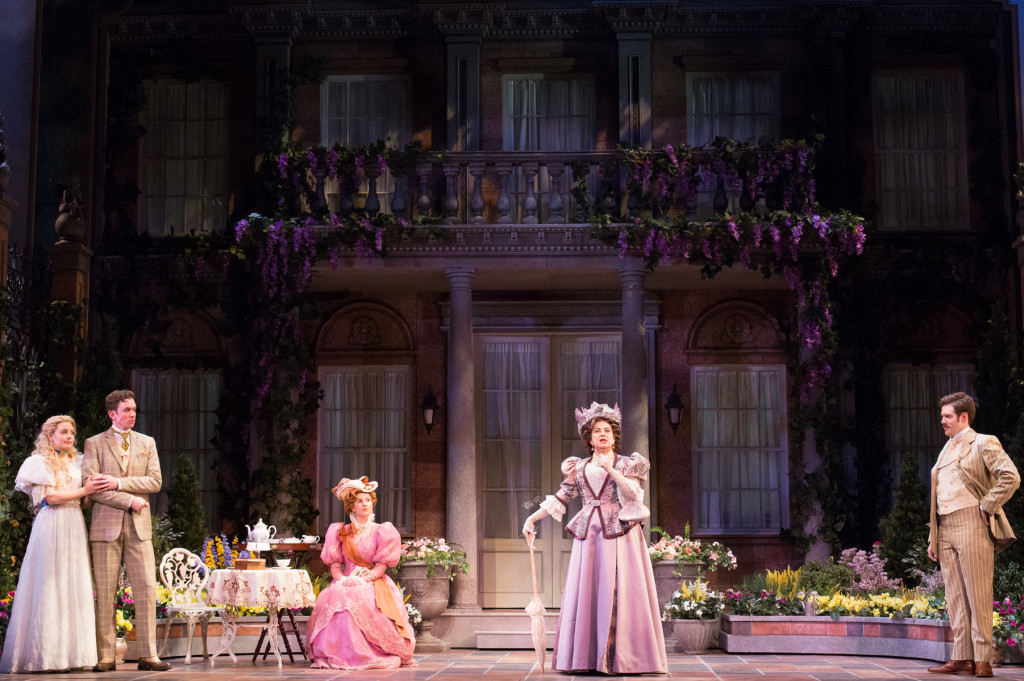 Oscar Wilde, that dandiest of dandies, lived through much of the Victorian era’s earnestness about the importance of being earnest. He attacks it with a feather, as if he would tickle it to death. Under director Bob Carlton’s light touch, the Walnut Street Theatre’s delectable production of THE IMPORTANCE OF BEING EARNEST finds just the right tone and style. The play’s subtitle, “A Trivial Comedy for Serious People” seems a perfect description.

The frothy plot is preposterous, involving two frivolous young men, the two frivolous young ladies they want to marry, a formidable dowager, a prune of a tutor, a dithering minister, and all the necessary butlers. In this mockery of the social conventions of marriage, Wilde piles on the happy endings with wild abandon.

The prize role in a play filled prize roles, adorable characters all delivering witty dialogue, is that of Lady Bracknell, the aforementioned dowager, wearer of astonishing hats and barker of imperious orders. Mary Martello is can curl a contemptuous lip with the best of them (and the best who have played that role include Edith Evans, Maggie Smith and Judy Dench; it is sometimes a trouser role, and Brian Bedford, Stephen Fry, and Geoffrey Rush took their turns).

Martello predictably steals the show, although everybody else is just fine: Daniel Fredrick as the always hungry for cucumber sandwiches Algernon Moncrieff who, with Jake Blouch as “Jack” Worthing can stand with feet in ballet’s third position with preposterous grace. Lauren Sowa as Gwendolyn wears her chin very high indeed, while Alanna J. Smith is ridiculously blonde and lovely as Cecily. Ellie Mooney is a charming Miss Prism.

The lavish sets—first a London drawing room, next a gorgeous garden– are designed by Robert Koharchik who seems to have taken this bit of Lady Bracknell’s dialogue as his guideline: “ We live…in an age of surfaces. He has nothing, but he looks everything. What more can one desire?”

One Reply to “THE IMPORTANCE OF BEING EARNEST (Walnut): A trivial comedy for serious people”

The Importance of Being EarnestWalnut Street Theatre