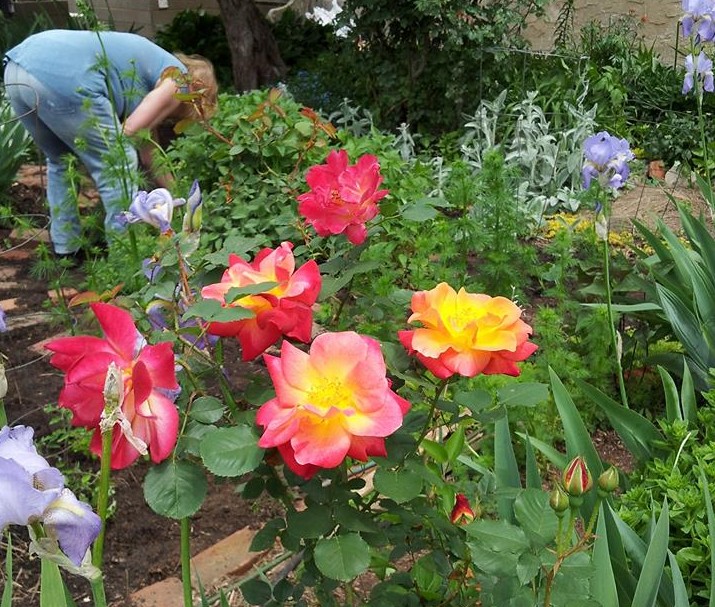 The Southwark Queen Village community garden, in the 300 block of Christian Street, has been in the neighborhood for over 40 years.

With the constantly changing face of urban neighborhoods, 40 years might seem like a lifetime. However, it represents only a piece of the history of urban community gardens in America, which stretches back to the 1890s. Then, 19th-century social-reform groups, like the Philadelphia Vacant Lot Cultivation Association, provided aid to unemployed laborers in the form of garden plots. Education reformers of the same era promoted school gardens as an instructional adjunct to teach good work habits and civics to young citizens. During both world wars millions of Americans planted household and community gardens to supplement food supplies and as an exercise in patriotism. In fact, in 1944, 44 percent of the nation’s fresh vegetables were grown in 20 million victory gardens.

During peacetime the number of gardens diminished, but a few of the World War II victory gardens survived and became the community gardens of the latter 20th century. The postwar demographic shift that saw growth in the suburbs and abandonment of the inner cities created a need among remaining residents to counter growing urban ills like litter-strewn vacant lots. In the early 1960s Philadelphia had an ambitious urban renewal program and, with support from the U.S. Department of Housing and Urban Development, created small parks on tax-delinquent land. These parks and playgrounds were developed only in the neighborhoods where residents requested them and where the residents agreed to help with planning, construction, and ongoing maintenance.

In 1976, perhaps buoyed by bicentennial spirit, community groups nationwide organized and created vegetable and flower gardens and received horticultural training from employees of the U.S. Department of Agriculture. The Southwark Queen Village community garden was born that year.

There are important differences between the community gardens that had their origins in movements in the 1970s and their historical counterparts. Earlier urban gardening efforts often had the support of or were initiated by local governments for larger civic purposes. In the 1960s and early 1970s, a different breed of citizen activism came into play. A convergence of the civil rights movement, nascent environmentalism, and a back-to-the-land philosophy coupled with population loss in the inner cities to create a diverse urban population whose members sought to revitalize their neighborhoods. This was the scenario in Queen Village in the early 1970s when residents began a grassroots effort to turn a rubble-strewn lot into a place where neighbors could grow food.

It was during the bicentennial celebration in 1976 that the Queen Village Neighbors Association began transforming the former site of the Henry Berk elementary school at 311–33 Christian Street into a garden. In 1977 the garden became one of Penn State Urban Gardening Program’s demonstration sites, showcasing community food production, recycling, open-space preservation, and nutrition programs. The gardeners were encouraged by the Queen Village Neighbors Association to try to acquire the site legally, and they worked diligently with local politicians to make it a permanent neighborhood green space. While the garden was owned by the federal government in the 1980s and considered “excess property” slated for sale, the government would not sell the land to the gardeners. However, in 1985 it allowed the city to lease the garden from the National Park Service for a period of 10 years. In 1991 the National Park Service and the General Services Administration honored the requests of Mayor Wilson Goode and other local politicians and deeded the land to the city for gardening in perpetuity. A key factor in the decision was the devotion and care exhibited by the gardeners toward the former vacant lot.

Over the past 30 years, the neighborhood has experienced major economic and demographic changes, but the spirit of the garden remains a constant. It began, and continues, as a labor of love for a diverse group of local residents who represent a wide range of ages, ethnicities, and economic backgrounds. To me this is the real story of community gardens and our garden, the Southwark Queen Village community garden, in particular. What is it that creates such devotion and cooperation among such disparate groups over such a long period of time?

Libby Goldstein is one of the garden’s founders and driving forces. She is also the de facto garden historian and maintained a thriving plot there until 2011. She can point to no single motivating factor among the original gardeners. Some were older African Americans who grew up in a rural environment, some were representatives of immigrant groups with gardening traditions, and others were younger white neighbors who came of age during the countercultural years of the 1960s and were influenced by the back-to-the-land ethos of that era. The common desire among this diverse group was to have a place where they could grow food. The garden served a social purpose as well, and gardeners spent a good portion of their time sitting, chatting, and drinking beer together. Gretta Norton, a community gardener in Boston in the 1980s, said of her own garden, “It’s a bridge between minorities and people of different backgrounds.” This is still true of Southwark, where blue-collar retirees give horticultural advice to younger lawyers, architects, and realtors. Community gardens are said to foster diversity, which they do, but there is a common deeper yearning to work the soil that ultimately creates the multicultural face of many urban gardens.

Is an impulse to work the soil an antidote to hours spent indoors tethered to a desk in a cubicle? Is growing our own food such an essential part of our nature that in even the most urban and “civilized” of environments we still seek out a way to till our own land? Only in the past hundred or so years have we lived in an industrialized society. Psychological studies have shown gardening to be mentally restorative and, by extrapolation, restorative to communities as well. Simply stated, gardening is good for us.

After four decades the Southwark Queen Village community garden continues to thrive. The neighborhood has changed markedly, and there is intense development pressure as the area becomes an ever more desirable section of the city. Gentrification has been extensive, and the average household income is probably much higher than it was when the garden was founded. Some veteran gardeners in Queen Village may be nostalgic for the spirit of the early garden, but history is about change, and there are important new movements in American cities that will inspire a new generation of gardeners and hopefully keep this a green space for decades to come. The local food movement, with its emphasis on sustainability, as well as a renewed interest in urban agriculture should help ensure the continued existence of today’s community gardens.

The Southwark garden also remains true to one of its original purposes as a demonstration site, even though today it showcases new technology in the form of solar power. The new exists side-by-side with the old, as new technology illuminates plots sprouting heirloom varieties of tomatoes, eggplants, and other vegetables. Perhaps this juxtaposition is just another example of the coexistence that defines this community garden—young and old, black and white, pensioners and professionals. At the same time, our common connection to the earth mutes these differences and creates a harmonious, cooperative endeavor that serves as an anchor in a changing neighborhood. I hope it will do so for years to come.