The lights show a bare stage; the set is two dilapidated buildings with scaffolding. The curtains intermittently change from day to night with a transient light. The place is Verona, and we witness the banishment of Romeo. Media Music Theater is showing Shakespeare’s ROMEO & JULIET: “there is no story more woeful than that of Juliet and her Romeo.”

This romance between two hearts should be a relief for some of us. For others the uncomfortable conflict between morals and socio-political principles can be unsettling. The poetic feature that Shakespearean drama brings to the English Renaissance is the sense of individuality in his characters.

Director Bill Van Horn’s ROMEO & JULIET focuses on Mercutio (Nick Parker), Tybalt (Leighton Samuel), and Lord Capulet (Anthony Marsala). Mercutio is made out to be a riot, and his antics with Benvolio (Luke Brahdt) are ridiculous. Tybalt gives us the rage that is internalized by the two families, the Montagues and the Capulets.

From this love story we have West Side Story? Or Baz Luhrmann’s 1996 adaptation William Shakespeare’s Romeo + Juliet, staring Leonardo Dicaprio? The setting of Bill Van Horn’s version, with the use of scaffold along buildings in need of repair shows restoration. Lord Capulet mistreats his daughter (Lexi Gwynn) and is a role which paints embarrassment on the presage. “A rose by any other name,” would save the unruly murdered love story.

The first and second acts are full of playfulness by Mercutio and Benvolio. It is not until the death of Mercutio that we are to feel any concern for the characters. Tybalt is quick to pick on Romeo (Brandon O’ Rourke) during a masquerade in the hall of the Capulets. He runs up the scaffolding and peers down at him like a hawk. The gang of Montagues appears under the scaffold in masks. Time freezes and the commotion freezes and all of the players are frozen, but Romeo talks to Juliet with his hand on his heart and another hand graces her presence from afar. “If love is blind it best agrees with night,” and this verse is juxtaposed with a neon blue light which shines where Romeo is up on the scaffold. 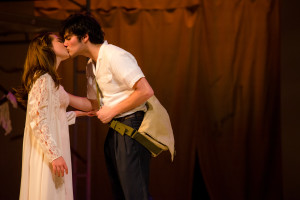 Characters reveal this “bitter conduct” in confidence with an “unsavory guide.” Juliet looks to the nurse (Susan Wefel), and Romeo to Friar Laurence (John Morrison). When Tybalt is murdered by Romeo we have yet again another ridiculous pleasantry. The message is misinterpreted by Juliet about whether husband or cousin is slain. Susan Wefel’s performance as the nurse is moving, and without a doubt she knows what she knows. On the other hand John Morrison’s Friar Laurence is comical and his judgement of Romeo shows less pity than that of the nurse.

The play begins with two Montagues, one biting their thumb at the other. This was indecent sign language of the time. Mercutio and Benvolio act childishly among themselves, making fun of Romeo. With a baguette as an erection and two sweet potatoes as testicles, Benvolio squats behind Mercutio. Nichalas L. Parker’s drag-like impersonation as Mercutio shows a brute with a high voice. This is a laugh to be had because they go on and on and it doesn’t seem to end until the audience is immersed in their foolishness.

This ill manner which Shakespeare brings to us on stage still presents relevant faults in our own modern time period. Lord Capulet, played by Anthony Marsala, in act III, scene III, is equivalent to the rage of Tybalt and the brute force of Mercutio. He is a terror and it is a terrific act of patriarchy gone bad!

The sexual tension is mostly elusive, That is, hands and lips are for prayer but Romeo insists, “Oh then, dear saint, let lips do what hands do…” The dancers at the masquerade stand in pairs, and move in sync with one another, each miming an imitation of the other, and their palms are almost touching.

Lexi Gwynn stands taller than the set, and in plain costume, slacks and a grey top. She is standing in front of the magnificently lit architecture which makes this Juliet a strong symbol for women, like the goddess of victory. Beautiful colors reflect off the facade. In a similar way, Susan Wefel adapts to the golden sunlight on the backdrop directly behind her. She adds her two sense, and her last snickering comment implies sex-filled, sleepless nights in her future.

For me the body and the mind, and passion and love, are made into divided entities in this ageless story of the Montagues and the Capulets. Juliet makes note of all of her body parts, and finally the name Capulet which is her fate. Likewise, Romeo in confidence with Friar Laurence says hang up philosophy, and his reason is that if he cannot feel then he cannot speak. The inevitable end we all know is coming, a double suicidal death, and in this adaptation by Bill Van Horn’s direction Juliet’s deathbed is most memorable by having her lying head first. By positioning her this way, the cast is looking down on her and facing the audience. It was a shocking moment of self-consciousness, and unconsciousness for Romeo and Juliet.