For their debut production, Susanne Collins and Kevin Meehan, an experimental devising and performance duo based out of West Philadelphia, looked to one of the most iconic actors of contemporary cinema. TWO WALKENS, which launches a short citywide tour this Thursday, features two Christopher Walkens having a showdown at the crossroads of memory and nostalgia.

A smash-up of Walken’s best-known works (Pulp Fiction, The Deer Hunter, SNL & more) with The Little Prince, TWO WALKENS explores how we cope when the world outside gets to be too tough to handle. Individually, Collins has worked with Pig Iron Theater Company and Sam Tower + Ensemble, and is a member of the arts collective Plant Me Here; Meehan is a New Paradise Laboratories company member, a Wilma Theater Hothouse Resident Artist, and has worked with Lightning Rod Special. Together, they spoke to Phindie about their joint work. [various locations] December 1-4, 2016;

Phindie: Is this a holiday show?

Phindie: Well, thank fuck for that. How did the piece come about?

Susanne Collins: Over a year ago, inspired by Kevin’s incessant use of his Christopher Walken impression, we had a half-joking drunken conversation about how funny it would be if we made a show where we both played Christopher Walken. Cue the light-bulb moment.

Phindie: Why Christopher Walken? Did you consider other actors?

Kevin: We were first and foremost tickled by the fact that Christopher Walken impressions are a notorious staple for actors. After we started our research phase (watching Walken films on end for months), we were also struck by his versatility as an actor, his odd energy, and his varied choices of roles. So no, we didn’t consider any other actors, but another American icon of the same ilk makes a small appearance in the piece.

Susanne: The first part of the process simply comprised of us watching Walken films on end for a few months–really get to know the guy to make sure we wanted to make a whole piece about him. We tested a few minutes of material to gauge interest at Kevin’s work-in-progress series 4 Weeks in January this past January, and got some exciting feedback. Then, this summer, we were lucky enough to be the inaugural performing artists-in-residence at the University City Arts League in West Philly. There, we had three months to develop a majority of the work, and had a successful showing at the end of August.

Kevin: We’ve been a couple for two years now and have worked on some small projects together here and there. During those projects, we found out that we work together really well. We both have completely different vibes and approaches to work, which can sometimes be frustrating, but ultimately it makes for a more interesting lens to our work. Most of the time, though, we’re both pretty quick to say “yes” to each other’s ideas. One of us will say “hey, let’s try this,” we try it, and then it gets logged away if it’s interesting. As the piece starts solidifying itself as a whole, we see where these interesting tidbits fit in. Like a lot of devised work, it’s a collaging of impulses. 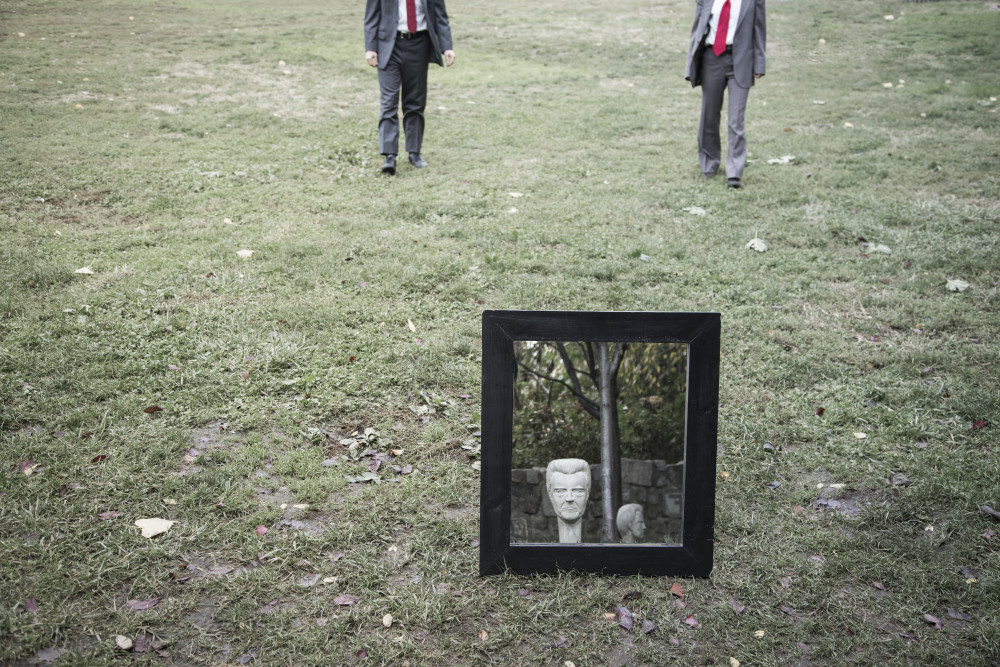 Phindie: Do you have a favorite Walken movie?

Kevin: As of right now, I think it’s A Late Quartet.

Kevin: His cameo in Gigli–he comes in as a detective, says a bunch of ridiculous things, and leaves. Perfect.

Susanne: His “Indoor Gardening Tips from a Man Who’s Very Scared of Plants” skit on SNL is definitely my favorite. As a gardener, I can relate.

Phindie: Is there anything else you’re looking forward to on Philly stages?

Susanne: We’re super jazzed for Annie Wilson’s piece At Home with the Humorless Bastard coming this week at FringeArts—in fact we specifically scheduled our Friday show at 6pm so we could catch her show after at 8! We also love to support each other—I’m super excited to see Kevin in JOHN at the Arden…

Kevin: … and I’m all a-twitter about seeing Susanne in LOST GIRLS at Theatre Exile.

Kevin and Susanne: Thanks again and be well!