The story of Euripides’s third place finish in the 431 B.C. Athens Dionysia festival is one to warm the hearts of unsung writers everywhere. The great Greek tragedian finished behind two now-forgotten playwrights for his telling of the older myth of Medea, wife of Jason (of Argonaut fame). In Euripides’s version, Medea kills her own children in revenge after being spurned by her husband. The Athenian audience may not have been ready for Euripides’s poetic work, but its reputation has endured as one of the great Hellenic tragedies. 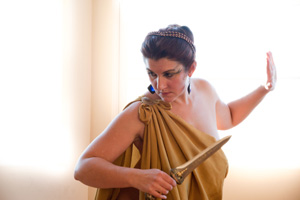 As a proto-feminist tale, Medea’s story has inspired many re-tellings and interpretations. She is featured in two bold poetic productions hitting Philadelphia stages this week.

In Women of Fire and Blood, at the Walking Fish Theatre (details below), contemporary Greek poet Lili Bita reimagines the story of Medea and ten other archetypal heroines of antiquity through a modern feminist sensibility. “I saw the most beautiful and powerful of women, chained by myth. I heard their demand for release. It was then that I decided to free them and to give them their voice through my own,” says Bita, who also directs the show. All eleven characters will be portrayed in verse monologue by Hannah Tsapatoris MacLeod. MacLeod’s previous productions as artistic director of Naked Feet Productions include a take on the story of Medusa.

Aristotle criticized Euripides’s Medea for its deus ex machina ending, in which the title character appears as a goddess on a chariot. It’s difficult to know what he would have thought of East German playwright Heiner Müller’s Cold War–era interpretation, which culminates with an appearance by that period’s boogeyman, an atomic explosion. Ascendent local outfit The Renegade Company is presenting Müller’s Medeaplays alongside his Hamletmachine, another avant-garde poetic deconstruction that expresses the angst and alienation of Cold War modernity. Directed by Renegade artistic director Michael Durkin, the production stars Corinna Burns (seen in August: Osage County at the Arden) and Griffin Stanton-Ameisen (BRAT Productions’ 24-Hour Bald Soprano), with Kevin Chick (HellaFresh Theater’s California Redemption Value) and Dani Joy Owen (former company member of L.A.’s Filament Theatre).

I’m guessing neither Hamletmachine and Medeaplays nor Women of Fire and Blood would wow the audiences of Golden Age Athens, but both promise to be interesting stagings exploring contemporary language and myth. Euripides, at least, would approve.