This weekend, Morriah Aleese Young reveals her unique and imaginative project BUILDING A WORLD, BUT BUILDING A WORLD FOR WOMEN. Morriah, who goes by “Peanut” to her friends and collaborators, is piecing the last bits together to create her feminist utopian artscape inside University of the Arts’ Hamilton Hall.

Drawing from various media like crafting, poetry, and movement, BUILDING A WORLD, BUT BUILDING A WORLD FOR WOMEN transcends being defined as but one form of art, and blends its different components together to create an experience sure to enlighten and inspire. Morriah took some time out of her busy schedule to sit down and discuss this project, feminism, boob-themed carnival games, and Beyonce.[University of the Arts, Hamilton Hall, Studio 316, 320 S. Broad Street] July 15-17, 2016; building-a-world-but-building-a-world-for-women.ticketleap.com.

Morriah Aleese Young: BUILDING A WORLD… is an installation performance art piece, where I’m interviewing a hundred women – or attempting to interview a hundred women – asking them what should be, what could be, or what would be a woman’s world if we had the power to create a brand new world for us, and I’m taking those answers and incorporating [them] into the installation. And the answers that I get can range from anything very realistic and something that’s very close to home that people can understand, or something that’s very far-fetched, magical, fantastical, and kind of infusing them both. It’s also going to incorporate movement and poetry that I’m writing, dealing with a lot of feminist issues and women’s equal rights. So when you walk into the space, you’re seeing this magical world that’s so peaceful, or so different, but the poetry is very, very familiar. So the world that I’m building is new but the poetry is basically the world we’re living in. So it’s a montage of a bunch of different things mixed together.

Phindie: How did you conceive this piece?

MAY: Right before I graduated [UArts], I realized that I was entering this new phase of womanhood, and I found myself having a lot of questions. They were questions that I did not know the answer to, or they were things that I was sure about my entire life, and then all of a sudden, I’m approaching graduation, and something that I thought was true, I’m now questioning. Some of those questions were very simple, like “Why is long hair a standard of beauty? Why is short hair considered something masculine? Why is it more feminine to have long, flowy hair and more masculine to have short, stubby hair?” And questions like, “What makes me a woman?” [in light of] social issues arising for the transgender community as well as the non-binary community. And then if gender becomes something that one can declare and not something that we’re told what we are through our organs, what then makes me a woman if it’s no longer because of what I was told I am? I really want to figure that out through this piece.

Phindie: What other questions were you addressing?

MAY: Another important question that I had was, what the hell is feminism? I always knew what feminism was, but I just heard so many different things from so many different people about it. People are defining feminism in different ways, like “this is feminism and this is not feminism”, and I wanted to find out for myself what feminism is, because I don’t want to declare myself as a feminist and have a misleading definition of it. And once I started digging into that research I started realizing how many people really don’t know what feminism is. The most interesting part of this process for me has been the interviews. I’ve interviewed a range of different types of women. One of the questions I asked was “How would you define feminism” and people would either go on a rant about how they don’t like feminism or how the don’t agree with feminism, or people would go on a rant about why feminism was important. But there weren’t a lot of people actually defining what feminism is. There were a couple of people who had the definition and ideology of it down, but there were a lot of people who didn’t know what feminism was, or didn’t define it. For me, that was when I really hit a bump in the road for the process. So then I was like, “People are going to come out to see this show, people are going to have an experience and they may enjoy it but what do i want to leave them with?” I want to leave people with a definition of feminism. I’m literally defining feminism for you visually, poetically, with movement. I want people to leave knowing what it is, because I feel like some people don’t know.

Phindie: So, were you interviewing cisgender women as well as trans* women?

MAY: Yes. I’ve been debating back and forth about whether I wanted to open it up to non-binary people but I think right now I just want to focus on women because there’s already so much to cover. Including non-binary is a whole other field that I do not know enough about yet to speak on, and I feel like right now my place is to talk about what I’ve been focusing on, which is women. I feel like non-binary people deserve to have their own thing, and I’m thinking a non-binary piece should come from someone who’s non-binary.

Phindie: There are lots of different media involved in this. What is every medium involved and how does it all fit in?

MAY: I’m still trying to figure out what’s all involved! I guess the thing I’m most excited about, and that I’ve had the most fun doing, is actually building the world and crafting it. Crafting it has been the biggest part of this project. It has been so time-consuming, a lot of fun, very stressful [laughs] … and it’s also interestingly enough the department I’ve had the least experience in. I have the most experience with writing and performing, but actually using my hands to craft has been something very new, and something that I’ve always wanted to do but something that I’ve never had the opportunity to do. There’s been a lot of painting, a lot of paper crunching… A lot nature walks, and looking like a crazy person with a trash bag picking up sticks and rocks.

Phindie: Has it been easy to bring it all together?

MAY: There’s been a lot of writer’s block in terms of writing the poetry. I normally don’t get writer’s block. This is new for me. When people say writer’s block, I’ve never really understood the whole frustration of it. It’s very difficult to write, and I think it’s because of all the different hats right now, and I’m focusing on the world being built. But the writing of the poetry has been another art component.

And then the movement component is still fairly new.

There might be a hint of music, possibly, but that’s still undecided. For me this piece is about asking questions and experimentation rather than making a statement. Naturally there are things that I want to say, but a lot of things about the piece are asking questions. 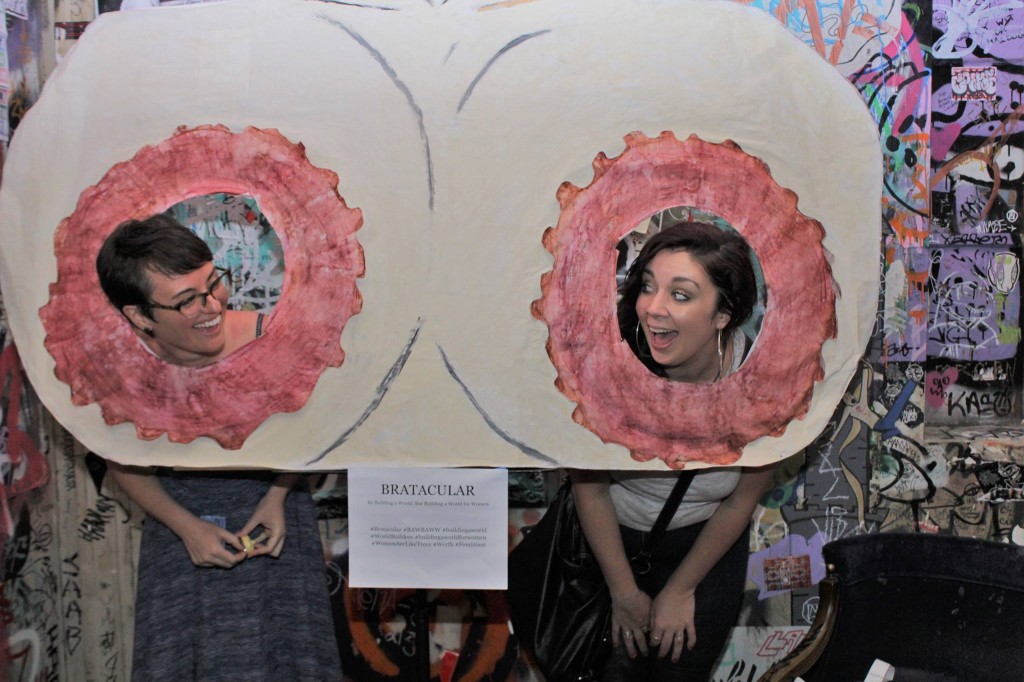 Phindie: You hosted the Bra-tacular at Tattooed Mom to fundraise. How did that event go?

MAY: This was so successful that this is going to be an annual thing – even after the show! Bra-tacular was something I came up with. I wanted to do something fun. We’re gonna have this maybe semi-serious piece, but before then I want to get people excited, I want people to have fun. What’s more fun than bras and boobies? Nothing! I just want to get rid of the stigma of boobs being something uncomfortable. Bra-tacular was a carnival, or an arcade. You can buy raffle tickets, each raffle ticket was a dollar. We had a menu at the ticket booth that listed all the activities. We had Build-A-Bra, we had Tug-A-Bra, we had Bra Limbo, we had Pin the Bra on the Boobs, and we had Bra-sketball. Each station cost a different amount of tickets.

We also had cut-out boobs that you could take a picture in. Your face was the nipple and then the areola was around your face. What was cool about Bratacular was that everything was also handmade. We handmade those photo booths, and we had a little sign that said “Take a nipture!” We also made homemade chocolate boob pops.

Phindie: Your video “Women Are Like Trees” was really beautiful. Is it going to be part of the installation?

MAY: Possibly! [My production manager and I] are still deciding. The way I performed it in the video is completely different from the way I would have performed it in person. I definitely pulled back on the usual tone. I was also thinking about having an area where people could go to put on headphones and they can view it by themselves before I perform it so they can see the compare and contrast, or playing in the lobby before people enter the space. It’s been a lot of different ideas that we’re playing with and we’re still trying to figure out what’s best. I don’t want it to ultimately take away from the world, or be something we put in just for the sake of it. I’m a big art-crosser in general but one of things I’ve struggled with in creating this piece has been that sometimes, when I bring in a certain art form, it takes away from another art form.

Phindie: Are audience members part of the piece, or are they merely observers? To what extent is it interactive?

MAY:I like to tell people it can be as interactive as you want it to be. Every show you go see is what you make of it – even a concert. If you want to sing along, sing along. If you want to dance, dance! So I think it’s what you make it. I don’t really dig telling people what to do. I don’t really dig telling people how to prepare because I don’t really know what you need to prepare yourself. I don’t want to invade anyone’s decision-making process. If you want to come in and sit in a corner and not be bothered, it’s my job as an artist to recognize that. For me, interactive doesn’t always mean that you interact with the performer. The cool thing about the space is that you can interact with the world. There will be things that you can do that I don’t want to give away! I love surprising people.

MAY: Beyonce. Queen B is bae. She’s one of those artists who does what she wants, no matter who tells her she can’t do it, and I admire people like that. I also love Beyonce because she surprises people like me! I think “I know Beyonce like the back of my hand” but then she just drops an album. She uses her art to talk about her life. Everything we know about Beyonce isn’t because she went on some Gossip interview or because of the papparazi. We learn about her through her music and through her art, and I’m trying to emulate that.