Director Alexander Burns and his theater group and designers bring theatrical bad boy Christopher Marlowe‘s work to life. There’s nothing musty about their production of this 400 year old play. The tradition of producing DOCTOR FAUSTUS with illusion, firecrackers, appearances and disappearances dates back to its beginnings, and Quintessence’s staging does trickery proud. The stage itself, a long and deceptively simple black platform, extends across the middle of the theater space. It’s built in the configuration of a right triangle, and the ensemble performs on its tilted diagonal surface.

A Faustian bargain is the opposite of “The devil made me do it.” Lucifer didn’t seek Faustus out. Au contraire. Dr. Faustus wants more than can be gleaned from philosophy. Driven by a lust for the power that forbidden knowledge can bring, he wants to make a deal with the devil— his soul in exchange for 24 years of whatever he wants. Even the devil’s disciple, Mephistopheles, counsels the good doctor against pursuing his course of action. Yet Faustus loses no time sealing his bond, although his very blood congeals as he signs the contract. Gregory Isaac’s interpretation of the Faustus role takes him from scholarly to decadent, and from silly to pathetic, to deadly serious, while he maintains an underlying consistency of character.

The crazy thing is that while Faustus wanted and received immense powers, he often stoops to jokey trickery. And when you get down to it, Faustus wants the same things any ordinary old schmuck would sell his soul for if he could: the glories of travel, but mostly the splendor of sin. The Seven Deadlies strut their stuff in a “bad” runway performance backed by credible fashion industry musical accompaniment. 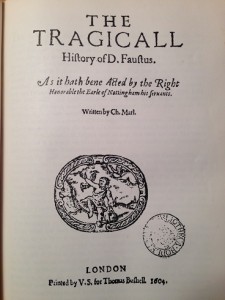 Should he repent or no? In Faustus’s moments of doubt, a proto-shoulder-angel-and-devil appear. Good Angel Alan Brincks and Evil Angel Leigha Kato vie for his soul. Kato is also the face that launched a thousand ships. And Brinks does vampy drag as the sin of Lechery. Faustus’s servant, the conservative Wagner, tightly played by Sean Close has another side. And Close does a mean Pope. Really, mean. Among John Basiulis’s roles is an old, wretched and scary Lucifer. All ensemble members except Isaac and Carpenter play multiple roles, and most play the hell out of them. Some are truly amusing clowns who have a way with dialogue. Some, demon she-creatures, who walk like zombies with hair fallen over their faces, show up when needed to pull souls into hell.

In DOCTOR FAUSTUS Christopher Marlowe straddles two competing views of hell. One represents freethinking rationalism: Mephistopheles says of life, “Why, this is hell.” And “Hell hath no limits. Where we are is hell.” The play’s primary perspective, however, hews to the old vision of a netherworld with hellfire and torment by demons a la Hieronymus Bosch. This dual view of hell is particularly interesting when you consider that Marlowe, who lived dangerously, was awaiting trial on an atheism charge. He never made it to court. Evidence suggests that Christopher (aka Kit), with his baccalaureate and master’s degrees from Cambridge University, was an operative in Her Majesty’s secret service. (They recruited Cambridge spies even then?!) He died by the dagger of a fellow agent, Frizer. Most likely a “hit,” some say. In his day Marlowe was considered more gifted than Shakespeare. But “the morning star of poetic drama” was left in the dust on a tavern floor at 29 years of age. Shakespeare, born the same year as Marlowe, went on for 23 more years, writing magnificent plays and achieving almost unbelievable renown. One wonders what the mighty Marlowe might have written.

Quintessence’s approach to it all—concept, roles, costumes, visuals, smoke, crazy stuff, light, and sound design—is remarkably original and gloriously entertaining. A signature Quintessence tradition is to provide notes on whatever play is being performed. These are literally writ large on the wall in the lobby, for the audience to peruse as they wait for the house to open. If you’re a Philadelphia theater bon vivant and you haven’t been out to the Sedgwick in Mount Airy to see the lobby notes and experience Quintessence, you’re missing out. Big time.  The Devil and Saints Repertory performances continue to 4/23 (St. Joan) and 4/24 (Doctor Faustus). [Sedgwick Theater, 7137 Germantown Avenue] March 30–April 30, 2016; Quintessencetheatre.org.